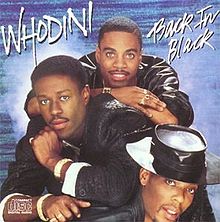 Back in Black is Whodini’s third release, and happens to be the only Whodini album I own.  Most of you have at least heard of the trio from Brooklyn, made up of emcees Ecstasy and Jalil, and deejay Grandmaster Dee.  Riding high on the success of their 1984 sophomore effort, Escape (“5 Minutes of Funk”…”Friends”…”Freaks Come Out At Night”…that album…please say you remember at least one of those songs, I’d hate to feel old all by myself), the boys came back (and for some reason felt it very necessary to sport black, as not only the the album title suggest, but they also don all black on the album cover as seen above…although, it would of been hilarious to have the same album title and the trio decked out in fuchsia for the album cover), and were able to build on its predecessor’s success, as Back In Black would eventually go platinum as well.  As I read the liner notes, I found it interesting that Larry Smith (the same Larry Smith would handled production duties for Run-DMC’s debut album) was responsible for the production on Back In Black.  How will Larry’s beats compliment Whodini’s flow?  Let’s find out.

Funky Beat –  Most of you have probably heard this at least once in your life. Larry Smith starts this one out with a pretty nice beat that surprisingly still sound pretty good.  And the lyrics?  Let’s just say you can tell this is 1986.  Right off the bat you can tell Ecstasy is the more polished emcee of the two (he even takes the time to show off his mastery of addition, which was pretty corny). It was nice to see the deejay get a chance behind the mic, although he shouldn’t quit his night job to start writing rhymes fulltime.  What in the hell does Jalil mean by “All deejays are created equal”?  Is that a compliment or a dis to his deejay?  While we’re talking about disses, was the line about not “needing a big ole band” a shot at anyone in particular?  Overall nice way to start the album as it kind of breaks the ice and welcomes you to their album, over a funky beat … Ooh wee!

One Love – Arguably their biggest hit (if not Freaks Come Out”), I’m sure you’ve all heard this song,  or at least the hook used or referenced in some other song.  The two emcees trade versus about how fortunate one is to experience true love in life, with out sounding corny.  Nice to see both emcees get personal and vulnerable on their verses.  The only downer about this song is the lame explanation of each of the letters that make up the word “love”: pretty lazy with the acronym fellas!  This still sounds great today.

Growing Up – Ecstasy and Jalil drop jewels about the maturation process and the lessons they’ve learned going from boys to men.  I love the bass line on this one, and it still sounds good today.  Larry Smith’s production has definitely “grown up” since his work on Run-DMC’s first album. I’m A Hoe – And then he hits us with this crap. Jalil rolls solo on this one and brags about the crew’s sexapades over a almost non existence but still very annoying beat (or should I say beep, that is literally what it sounds like). On the second verse he claims not to touch another man’s “property” (as if women are cattle), but by the end of the same verse he’s impregnated another man’s wife. Between the annoying beep, the corny lyrics, the juvenile flow, and the terrible hook, this song sucks.  Ecstasy was wise enough not to come anywhere near this train wreck.

How Dare You – I’ll take this time to say this: though Ecstasy wasn’t a “great” lyricist, he should be recognized for having one of the best rap voices in the history of hip-hop.  Other than that I got nothing folks…

Fugitive – Not sure what this song has to do with being a fugitive. This must have been the trio’s attempt at a “rock hop” song to give them some of that Run DMC commercial success. I could take or leave this one, you be the judge.

Echo Scratch – Living proof that there is nothing new under the sun. Before the abuse of auto-tunes took over the music industry, Whodini experimented with the computerized voice effect. This was mediocre at best.  Next…

Last Night – My, my, my, the hook is reminiscent of someone running their fingernails across a chalkboard.  I like the bass line, and Ecstasy kicks two nice verses, but other then that this was annoying as hell. The Whodini Mega Mix – This plays out just as it reads.  The trio mash together the biggest hits in their catalog (i.e. “Freaks Come Out”, “Five Minutes”,  “Big Mouth”) and it plays out like a Whodini mix tape.   This was cool, although it was a weird way to close out an album.

The Good Part – And the excruciatingly painful hooks continue where “Last Night” left off.  The beat is all over the placed and sounds forced. This wasn’t good.

Back In Black starts out strong on the strength of Larry Smith’s production (surprisingly) and Ecstasy’s polished vocal, but quickly fades, as the production grows boring in the middle and doesn’t picks up steam again, until the mega mix (which in my book doesn’t count ,since its a bunch of snippets of previously released songs), which by then is too late. On a positive note, even though Mr Smith’s beats tend to reside on the dull side, they definitely sound more complete and diverse then his offerings on Run-DMC’s debut.  Random thought: who would take in a battle, Run or Ecstasy?