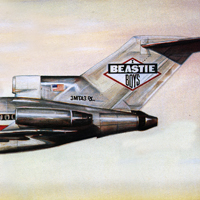 The Beastie Boys are the punk, turn rap trio from Brooklyn, who helped build the empire known as Def Jam. In 1986 they released their debut album Licensed To Ill, which went on to sale a gazillion copies, and cemented Rick Rubin as one of the best hip-hop producers of his time. If you would like a more thorough background on the trio and the creation of this album, I encourage you to check out http://hiphopisntdead.blogspot.com/search/label/Beastie%20Boys and read Max’s write up on Licensed To Ill.  I’ve always wondered if the trio’s popularity was based on pure talent or more on the novelty of a white act taking part in a musical genre dominated (and created) by African Americans.  Just a thought.  The Source awarded Licensed To Ill a five mic rating in 2002.

Rhymin & Stealin – Dope Beat!  Right off the bat Mr Rubin starts the show with a banger.  While The Beasties don’t say anything memorable (other then the reference to Ali Babba and the 40 thieves), but still manage to sound decent.  Nice way to start your debut.

The New Style – There are quite a few recognizable lines in this song that would later be sampled by other artist.  Mike D’s line about liking under aged girls was kind of distrubing, and I don’t remember the Beasties being so violent (MCA is gangsta!).  Mike D’s impromptu English accent on this song was pretty funny (its sounds believable, him being from Brooklyn and all).  Overall this was…okay.

She’s Crafty – Mr. Rubin you’ve done it again!  I love the guitar rift that the boys share lines on about a slick chick named Lucy.  The fellas chemistry really shines through as they bounce off each other to stitch together a pretty interesting story.  This was pretty enjoyable.

Posse In Effect – The trio spit random crap about absolutely nothing, and Mike D pulls out his “Brenglish” accent again for this one.  This ends just in time to avoid reaching the annoying level.

Slow Ride – Wow, I don’t remember the Beasties obession with guns on Licensed To Ill either.  It’s kind of funny to hear their gun talk over a beat that samples the same song used as the theme music for Pee- Wee’s Big Adventure.  Although it was humorous, it wasn’t effective.

Fight For Your Right – Ah, the offical frat party anthem.  If you’ve got ears you’ve heard this song before.  I’ve always hated this song, and that hatred is just as strong 20 plus years later.

No Sleep Till Brooklyn – Yeah boy, now Me. Rubin is back in the building!  Rick laced this track with nasty guitar licks  and a very sick solo at the end.  As usual, the boys hit the track nicely without saying anything memorable.  I wonder what Run-DMC would of sounded like on this track?  This still sounds good today and actually sounds like something an artist might use today.

Paul Revere – Classic!  This might be one of the top ten hip-hop songs of all time (yeah I said it, what?!).  The boys ride Mr. Rubin’ssimple, but effective beat like P. Rev road his horse during that midnight run to warn his peeps of the pending British invasion (he would of been wonderful working on the Def Jam street team, I see you William Dawes).  Dope beat and storytelling at its best-this just reminded me why I fell in love with hip-hop in the first place.

Hold It Now, Hit Now – I love the way “Revere” merges into this track.  I’ve always liked this song for its quirky feel and the organized, yet chaotic beat on the hook.  Though I love it, I could see how someone new to the Beastie’s brand wouldn’t feel this.

Brass Money – You’ve heard this song before.  I’ve never cared for this song and I’m sticking to my story.  The beat’s corny and the boys don’t cover any new territory with their rhymes.  I’m seeing a pattern here: if the beat bangs the Beasties random lyrics sound good, but if the beat sucks, all of a sudden the randomness isn’t quite as entertaining…hmmm.

Slow And Low – This was decent and easy to digest.  With so many White Castle references I’m shocked they didn’t get an endorsement deal.  The beat sounds a lot like LL’s “Rock The Bells”, which shouldn’t be a surprise, since Mr. Rubin is responsible for both tracks.

Time To Get Ill – The beat definitely fits the song’s title as Mr. Rubin uses random vocal samples and scratches throughout.  MCA boast that he “has mor rhymes then Phyllis Diller”? WTF!  This was okay, at best.

One thing that remains consistent for the duration of Licensed To Ill: When Mr. Rubin’s production shines the boys shine, but unfortunately when the tracks don’t work the boys lyrically sound dim. Let’s be honest, the Beastie Boys were and never will be great lyricists, its more their free-spirited vibe that makes them so infectious, which in the end makes Rick Rubin the most essential piece to Licensed To Ill.  Did The Source Get It Right?  While Licensed To Ill  was a commercial success, after listening to it today it’s definitely not a 5 micer.  With that said, it contains one of the best hip-hop songs ever created and a handful of good songs, which makes it a solid effort.