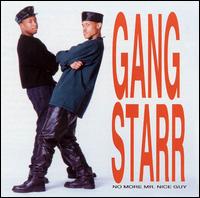 In March of 2010, rumors that Keith “Guru” Elam had suffered a heart attack and slipped into coma, flooded the internet and other media sources.  Sadly, on April 19, 2010 the hip-hop community was saddened when the rumors were confirmed and Guru was pronounced dead.  Since this is my first Guru related write-up, it’s only right that I say: RIP Guru.  And now a brief history on the formation of Gang Starr.

After graduating with a degree in Business Administration from Morehouse, Boston native Keith Elam decided he would pursue a career in hip-hop. Somewhere between 1985 and 1987, along with a few other associates,  Keith, whose rap moniker was The Guru Keithy E, formed the original Gang Starr Foundation.  With help from legendary deejay/producer Mark 45 King (more on him later) the collective would go on to release a few 12″ singles on the now defunct Wild Pitch label.  Eventually the crew went their separate ways, leaving Guru with sole responsibility to carry on “the chain and the star” tradition.  Around the same time an up and coming deejay and producer named Waxmaster C, sent Guru a beat tape, which he was very impressed by.  Guru extended an invitation for Waxmaster C to join the foundation, and after changing his alias to DJ Premier (Thank God!  It would have been pretty hard to call a guy going by Waxmaster C the greatest hip-hop producer of all-time), the two would form the new and improved (and now legendary) Gang Starr, and in 1989 release their debut album No More Mr. Nice Guy.

No More Mr. Nice Guy didn’t receive tons of critical acclaim, nor did it move a ton of units (but it did butcher Afrika Bambaataa’s name while shouting him out in the liner notes).  But it did produce a few decent singles, including “Manifest”, which is probably the most popular song on the album, but that’s not saying much.

Premier & The Guru – Over a simple but effective Premo beat, The Guru Keithy E (boy am I glad he dropped the Keithy E, that’s just way too much name for one man… not to mention, Keithy E sounds mad corny) uses three verses to introduce the world to he and his deejay. by 89′ standards Guru sounds pretty nimble on the mic.  This was a decent start to the show.

Jazz Music – This is definitely in my top 10 Gang Starr songs of all time: Guru pays tribute to jazz music by taking the listener on a journey through the history of jazz music, starting with its origin and name calling the key players who helped with its formation (a few months later Gang Starr released  “Jazz Thing” on the Mo’ Better Blues soundtrack, which pretty much covered the same territory, with a lot more detail (but conveniently failed to mention Miles Davis (who he mentions in “Jazz Music”), only the most influential trumpet player in the history of jazz music.  When asked about this omission in an old interview,  Guru said it was just a small oversight, though some speculate that someone within Branford Marsalis’ (who was heavily involved with the music for Mo’ Better Blues) family had a beef with Miles,   pressuring Guru into removing Miles name from the song).  Though this isn’t quite the boom-bap Premo would later become famous for, I still love the different layers and the Ramsey Lewis piano sample on this song.

Gotch U – Premo uses tribal drums for the backbone for this beat and borrows the sample Marley Marl used for Kane’s Raw (and later Kool G Rap’s “song title”).  I actually prefer Premo’s use of the sample over Marley’s (more so do to the drums).  Guru is a dope emcee,  but if Kane or G. Rap would have got a shot at Premo’s interpretation of the sample, they would have murdered him on his own shit.

Manifest – Speaking of Kane… Premo uses a Kane vocal sample for the hook to this classic Gang Starr joint. Guru’s manifestations range from boasts to lessons, over a hypnotic Premo track.  This version is cool, but Premo adds jazzy horns and a few more bells and whistles, to the remix, which  sounds 10 times better than the original.

Gusto – This is the first of two tracks that Premo would step a side and let DJ Mark 45 King handle production duties.  Guru’s first verse starts off awkward as he sounds as if he’s talking, but after a few bars you realize he’s started his verse.  Things don’t get much better, thanks to Guru’s low quality vocals which sound like they were recorded on a home karaoke machine.  This sounds like a scratch demo that should have been left on the cutting room floor.

DJ Premier In Deep Concentration – I’ve never been a huge fan of deejay songs, but this is hands down the greatest deejay song of all time!  Premier slices Kool & The Gang’s “Summer Madness” to pieces, adding in a few vocal samples that help make this the perfect gem from the title all the way through the end, where Premo’s vocal sample let’s us know it’s time to get “movin’ on”.  A little taste of heaven.

Positivity (Remix) – Album sequencing rule #1:  Never place a remix of a song before the original version appears on the album.  Like most of Vince Young’s actions, that’s just dumb.  Anyway, Guru spits “positive” rhymes over a decent Premo track.  That’s all I got.

Manifest (Remix) – See my comments up above for Manifest ( I love the extended instrumental that opens this version… Premo for President).

Conscience Be Free – Now this is a song I completely forgot about.  Over this multi-layered (remember this is 89′) smoothed out Premo beat, Guru sounds better than he’s sounded for the majority of No More Mr. Nice Guy, up to this point.  Again, this isn’t the boom bap that most Gang Starr fans would become accustom to hearing from the duo (and it may have too much of a pop/r &b feel for some of your taste buds), but it’s still enjoyable hip-hop from one of the greatest groups to ever do it.  Nice.

Cause And Effect – Premo scratches in the high-pitched whistle sample (that would become a signature of DJ Premier’s production work) over Isaac Hayes’ “Shaft Theme” sample.  I’m listening to this with my ear buds and Guru’s stacked vocals play on separate ears, so by the end of the first verse it becomes pretty annoying.  Overall this was cool…might have been a better experience without earphones.

2 Steps Ahead – Keithy E does his best Kool Keith impersonation, over a Premo track that sounds like it’s stuck in neutral.  That’s all I got.

No More Mr. Nice Guy – Hearing this now I can’t help but envision a half-naked Lil’ Kim and shiny suit Puff Daddy (pre P-Diddy, Diddy, and whatever he’s calling himself these days: not only did he (allegedly) invent the remix but he also would remix his alias, several time) dancing around in her video for “No Time”, which uses the same Vicki Anderson “Message From The Soul Sisters” sample used on that song.  Guru sounds serviceable, but nowhere near as polished as he would become in the following years.

Knowledge – Mark 45 King gets his second production credit (but I have a sneaky suspicion that Premo had his hand in this as its sounds like something he would have hooked up), with this being the superior of the two, this track is hot.  Guru and his guest Damo D-Sky (who’s not even mentioned in the liner notes) sound pretty good as they each get two verses and make the best of them.  This was hot!

Positivity – There really isn’t that much of a difference between this mix and the “remix”, other than Guru’s shoutouts at the end.  Since Guru kicks the same rhymes as the “remix” this turns into a waste of time.

No More Mr. Nice Guy is easily the weakest album in Gang Starr’s storied career, which says a lot about their output, because this is not a terrible starting point. Guru, who was clearly still finding his lane as an emcee, sounds very wet behind the ears for the majority of the album. Premo shows flashes of genius, as we get a taste of the greatest hip-hop producer of all times (yeah, I said it!) earliest works.  You wont love every song on No More Mr. Nice Guy, but you’ll like enough of it to make it a worthwhile listen.