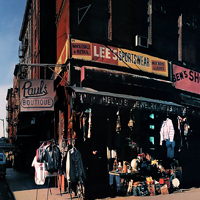 After releasing their ridiculously successful 1986 debut, Licensed To Kill , the Beastie Boys would take a three-year hiatus before releasing their next album, with a lot of changes taking plain the in between time.  Most notable, the boys split with the Def Jam empire they helped build, inking a deal with Capitol Records (boy I’m sure Russell is still pissed he let that money-making monster slip through his hands).  They would also leave Brooklyn and head west, leaving the congested street of New York for the sunny beaches of California.

With Def Jam and Brooklyn left behind,  they completed the wiping of the slate by parting with Rick Rubin’s sparse production in favor of the L.A. based Dust Brother’s multi-layered sample laden production for their 1989 release Paul’s Boutique.  The title comes from a (formerly) Brooklyn based shop of the same name (although the photo used on the cover is not the real Paul’s Boutique, nor was the photo taken in Brooklyn).

Upon it’s release Paul’s Boutique record sales were slow, especially when compared to the gazillion records their debut sold.  This caused Capitol Records to call it a failure, stop promoting it, and focus on Donny Osmond’s new album (no, I’m serious).  Though it might have been a commercial failure it received heaps of critical acclaim and is considered by many to be their best work, as its praised for its innovative production and the Beastie Boys lyrical maturity.

Beastie Boys and maturity should never be used in the same sentence.

To All The Girls – Only if this was the intro to Will.i.am’s solo debut, would this not be a weird way to start an hip-hop album.  But it’s not, so instead we’re left with a shout out to girls from different regions, countries, and continents.  The instrumental was pretty dope, so it wasn’t completely useless.

Shake Your Rump – People praise the Dust Brothers work on Paul’s Boutique for its multi-layered sampling. And while this is apparent on “Shake Your Rump” it sounds a bit scattered, jumping all over the place like a 5 year who just ate a bag of cotton candy and washed it down with a can of Red Bull.  The trio pick up where they left off on License To Ill, spilling senseless rhymes all over the place.  I wasn’t impressed.

Johnny Ryall – Over a funky instrumental the trio spin a tale about a homeless drunk claiming to be a musician, Johnny Ryall.  The line about Johnny having a platinum voice but only gold records, was pretty funny.  The story is amusing, until you realize you’re laughing at the less fortunate, then you feel guilty for laughing and realize how messed up you and society are, before the epiphany hits and you realize how genius this song is.  And that’s what good music is all about anyway, right?

Egg Man – The Dust Brothers hook up Curtis Mayfield’s “Super Fly” as the backbone for this instrumental (with loads of additional samples in true Dust Brothers fashion) that the Beasties use to spit hilarious lines about egging random passer byers.  This is the kind of immature stuff all grade school, high school, and college boys can relate to and have taken part in (along with ding-dong ditch and crank calls) while hanging with the crew.  Hey, it seems innocent when compared to drive-by shootings.  This was pretty enjoyable, juvenile but genius.

High Plains Drifter – This could have easily been titled “Paul Revere Part II”, as the boys revisit their roles as outcast criminals.  The Dust Brothers instrumental is cool, and the Beastie sound pretty nice on the mic.  But unlike “Paul Revere” which maintained a playful vibe throughout, the instrumental for “High Plains Drifter” gives the trio’s lyrics a much too serious tone.  Then you remember this is the same crew who brought you frat rap, and it becomes unbelievable… then shortly after, laughable.

The Sounds Of Science – The Dust Brothers instrumental switches up a la Ice Cube’s “Jackin’ For Beats” with mixed results.  I actually like the mellow beat the songs starts with, but once it moves to a faster paced rock-tinged beat, the Beasties vocals get drowned out by the sounds, rendering their science as gibberish.

3-Minute Rule – The Beasties each get a verse and all three successfully ride this Dust Brothers beat like a dress on Beyonce’s curves.  MCA provides the first f-bomb of the evening and is also responsible for the funniest line on the song as well (see his line about your mom male genitalia).  This was dope.

Hey Ladies – What would a hip-hop album be without misogyny.  Once again the Dust Brothers pull a “Jackin’ For Beats” move, with their various samples (even sampling Zapp at one point), but fails miserably.  The Beasties turn in forgettable performances, so there was no need to waste a good instrumental on this crap, anyway.  This was actually the first single off Paul’s Boutique, which might be a better explanation to the album’s slow take off as opposed to Capitol’s lack of promotion.

5-Piece Chicken Dinner – A short instrumental that sounds like something you would hear at a hoe down instead of on a hip-hop album.  Not sure what the purpose of this was.

Looking Down The Barrel Of A Gun – This sounds like something your local serial killer might use as theme music before targeting his next unfortunate victim. That is before the topic switches from acts of violence to lines about writing rhymes and some dude named Dave coordinating their chics (wtf?).  The Dust Brothers instrumental matches the song title beautifully, easily making this the darkest Beasties song I’ve ever heard.  Unfortunately the boys lack of focus in their lyrical content brings this one down faster than Rick Ross jumping from the Sears Tower draped in a million dollars worth of jewelry. If there was a hidden message in this song it went completely over my head, as this just sounds like utter randomness to me.

Car Thief – Sometimes its hard to follow the boys lyrics, but I believe “car thief” is slang for biters?  This Dust Brothers’ beat is decent, but like some of the earlier songs on Paul’s Boutique the instrumental drowns the Beasties lyrics out.  Moving on…

What Comes Around – I think the Beasties were trying to make a point, but the message gets lost in their random lines (although, the reference to Geraldo Rivera’s chair throwing incident was kind of funny).  Random lyrics aside, this Dust Brothers instrumental was very nice, easily their best production work on Paul’s Boutique up to this point.

Shadrach – As in the biblical story of Shadrach, Meshach, and Abednego.  I guess this title was chosen to refer to themselves as three “hot” emcees?  (thank you, thank you…I’ll be here all week).  The boys spit random lines, throwing in a few biblical and religious references, probably just to better justify the song title.  The Dust Brothers instrumental work was pretty interesting, though.

Ask For Janice – This is a short advertisement for Paul’s Boutique.

B-Boy Bouillabaisse – This is actually a 12 minute collage of the following 9 short songs:

b) Get On The Mic – The beat switches back and forth between a beat box and a simple drum beat for the back drop for this, lack of better term, short instrumental.

c) Stop The Train – The Beasties spit an animated and clever rhyme about the sights and sounds on the New York transit system, over a sick Dust Brothers instrumental.  Nicely done, fellas.

d) A Year And A Day – I believe this is an Ad-Rock solo joint, but I’m not completely sure since the vocal is distorted and drowned out by the instrumental.  But that not important since the beat is so sick!

e) Hello Brooklyn – Yes, this where Jay-Z got his inspiration for his song with the same title from American Gangster.  I’ll say this: Jay does a better job of sticking to the subject on his version than the Beasties, which shouldn’t come as shock to anyone.

f) Dropping Names – Huh? At least it was short.

g) Lay It On Me – More Beastie Randomness.

h) Mike On The Mic – Mike D’s solo joint over a simply drum beat.  Sounds like a leftover from Licensed To Ill.

i) A.W.O.L – This is just footage taken from a live show of the trio getting the crowd hyped. It quickly bleeds into the same instrumental used on “To All The Girls”, bringing Paul’s Boutique full circle, and to a closure.

Many fans and critics consider Paul’s Boutique to be the Beastie Boys finest hour. I’ll be the first to admit, I’m not the biggest Beastie Boys fan, as I’m really only familiar with their debut Licensed To Ill.  I have stumbled across most of their catalog at used record shops over the past few years (thus the reason for this review) and will chronologically work my way through their library. That said, if this is indeed the Beasties finest hour I’m not sure if I’m looking forward to the remainder of their work.  Don’t get me wrong, the boys show signs of maturation as Paul’s Boutique actually tackles serious issues (even if it’s done in a not so serious tone), and even the playful songs sound more focused than on Licensed To Ill.  The Dust Brothers’ colorful production is a nice addition , that more often than not works for the fellas.  Overall, Paul’s Boutique suffers from the Beastie Boys limited lyrical ability and song ideas.  While its a decent album, its far from great, or even one of the best hip-hop releases of the eighties for that matter.  Yeah I said it!