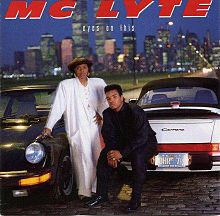 At the tender age of 16, MC Lyte dropped her debut album Lyte As A Rock, which just so happened to come out in 88′, which is considered by many hip-hop historians to be the best year, ever, for hip-hop releases .  Lyte As A Rock wasn’t a commercial success, but Lyte showed potential in her skills, while making heads take notice.  The nagging problem with her debut (in my opinion) was in its production, with the majority being handled by Audio Two (Milk, half  of the duo, was her brother).  I guess blood is thicker than water, even if that means sacrificing the quality of your debut album.

Lyte would return in 89″ to release her follow-up effort Eyes On This, staying true to her original format of party and battle rhymes over… Audio Two production.  Lyte would invite a few other producers to handled a handful of tracks (more on that later) but the bulk of the load would again fall on Milk and Gizmo’s shoulders.

I’m all about second chances. Maybe their work on Lyte As A Rock was a fluke. Maybe the duo matured, and they’ve learned to craft beats that compliment Lyte’s sharp flow.  Maybe they were both suffering from hearing loss during the recording of Lyte As and made enough money in between albums off royalties to get hearing aids to correct the issue, or at least purchase q-tips to take care of the wax build up.  I’m trying to be optimistic, guys.

Cha Cha Cha – This hip-hop classic was released as the first single off Eyes On This.  King Of Chill lives up to his name, providing this chill but equally funky instrumental for Lyte to spill smooth lines (that King Of Chill also wrote) over.  This sounds just as good today as it did twenty years ago.

Slave 2 The Rhythm – PMD, of EPMD (which is actually spelled out “Pee MD” in the liner notes, just a colon short of being a request) gets a rare solo production credit (other than the work on his own solo projects) for this track, and it’s actually pretty good.  Lyte puts in blue-collar day’s work on the mic, even at one point taking another shot at her long time nemesis Antoinette.  This was nice.  Now I’m curious on what PMD’s beats sound like on his solo work…maybe one day I’ll track those down.

Cappucino – Marley Marl turns in his only production contribution on Eyes On This.  I belief this was the second single off the album.  Lyte uses this simple but effective instrumental to tell a story about her quest for a cup of cappucino that turns fatal…or does it?  Props to Lyte for the original song idea.

Stop, Look, Listen – King Of Chill’s instrumental sounds a lot more interesting with headphones than it does when listening with the naked ear.  Lyte sounds cool, but King Of Chill helped write the rhymes, so  she loosed a few cool points.  This was still a decent listen.

Throwin’ Words At U – Lyte’s brother’s group, Audio Two, provide this generic instrumental, which sounds like it was just thrown together for Lyte to, throw words at you.  The beat was so boring I completely lost interest in whatever it is Lyte was saying.  Next…

Not Wit’ A Dealer – Lyte and  a nameless female guest use this one to paint a tale about her friend who gets herself in a bad relationship that ends fatal.  unfortunately Lyte again looses points as Milk wrote this one.  I’ll give Lyte a few of the points back since Audio Two’s beat sucks elephant balls (I see you, Max!).

Survival Of The Fittest (Remix)  – This instrumental work is credited to both King Of Chill and Audio Two, but its generic feel has Audio Two written all over it (the proof is in my yawning).  Lyte’s credited for writing her own line on this one, but unfortunately she sounds half asleep.  But once you hear Audio Two’s production work you’ll empathize and forgive her for her drowsiness (*stretching* I need a nap…).

Shut The Eff Up! (Hoe) – Picking up where “10% Dis” left off, Lyte dedicates this one to her arch nemesis and long forgotten rival, Antoinette. Some of Lyte’s shots are pretty entertaining (love the line about Antoinette’s two-for-one skips), but when she calls Antoinette out for not writing her own rhymes, I wanted to introduce the kettle to the pot. Unfortunately, Audio Two’s empty beat does nothing to evoke a battle rhyme environment, so Lyte verbage is in vain.

I Am The Lyte – Grand Puba (yes, of Brand Nubian) provides the instrumental for this one, and it actually sounds pretty good.  Then again, after hearing Audio Two’s lackluster production for the last few songs, anything remotely decent sounds like Premo’s best at this point.  A la Pete Rock, Puba throws in his adlibs throughout the track.  This was pretty cool.

Funky Song – Puba get his 2nd production credit of the evening for this very genericly titled song.  Howie Tee used this sample on Special Ed’s “Taxing”, and I must admit Howie’s interpretation sounds more complete, and since we’re comparing, Ed does a better job than Lyte on the mic as well.

Please Understand – Lyte spits several tales about dudes who seem to have forgotten that Lyte is not haven’t.  Audio Two’s instrumental sounds more filled than the rest of their work on Eyes On This, and it actually works for me.  This is definitely one of the better songs of the evening.

K-Rocks Housin’ – K-Rock get a chance to go for his on the turntables, and at 4 minutes it runs a few minutes too long.   And with that we’re done.

When discussing the greatest female emcees of all time, MC Lyte has to be mentioned, no question. Granted, in the early part of her career she had a staff to help write her lyrics, but she still wrote the majority of her material, so you can’t put her in the same category as Foxy Brown, Lil’ Kim, or Kriss Kross.   The real problem with Eyes On This is the consistently inconsistent production.  There are a few times when  the stars align and the beats and rhymes move together in harmony (which normally occurs when Audio Two’s not involved), but this is the exception not the rule.  I wonder what Lyte would sound like over Premo’s boom-bap or Pete Rock’s heavy drums.   Eyes On This a very uneven listen that misses more often than it hits.  You might want to consider the water, Lyte.