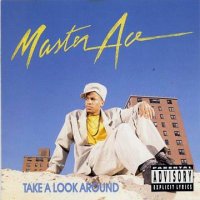 I remember once many moons ago, a friend and I were discussing the many underrated emcees in hip-hop.  Q-Tip, Postonous, Black Thought, and several other names were brought up.  One name my buddy mentioned, and a name he also believes to be the “epitome of b-boy” is today’s subject matter, Masta Ace.  Who I refer to as the rapper’s rapper.

Brooklyn native Masta Ace first came on the scene in 1988 making an appearance on the classic Juice Crew posse cut “The Symphony” from Marley Marl’s In Control Vol. 1

album. Unsurprisingly, Ace was able to parley that appearance into a deal on Marley’s now defunct label Cold Chillin’, and released his debut album Take a Look Around

in 1990. Anyone familiar with Ace’s catalog knows he has a fetish for creating conceptual albums.  Well, Take a Look Around

is unique in its the only non-conceptual Masta Ace album to date.  It’s also the only album that he spells his alias properly: by the release of his second album Slaughtahouse

he dropped the “er” in Master” and substituted it with an “a”.

Ace may not have the smooth flow or lyrical dexterity of Big Daddy Kane, or the rawness and wit of  Kool G. Rap but he’s no slouch on the mic. While other members of the Juice Crew are more celebrated, Ace has continued to produce quality music under the radar (even as recent as 2012) while his JC alumni have all but rode off into the sunset. Or into obscurity.

Music Man – Marley provides a banger of an instrumental (built around an infectious bass line) for Ace to get loose to, and he doesn’t disappoint. This kind of acts as Ace’s introduction to the listener, in an attempted to break the ice between himself and the listening audience.  Nicely done.

I Got Ta – The ice was broken on the previous song so Ace uses his fire spit to completely melt the remaining remnant on this one. Ace constructs a one verse wonder built around a vocal sample from James Brown that uses the song title in between every bar, which somehow manages not to get annoying.  Mister Cee (better known as Big Daddy Kane’s deejay) provides a fire instrumental for Ace to drop his jewels on. With heat like this it’s a wonder why more emcees didn’t look to Cee for beats  Nice.

Letter To The Better (Remix) – This is labeled as a remix on the liner notes but I’ve never heard the original. Hopefully the instrumental on the original was more appealing than this stale Marley Marl conception. Regardless, Ace still makes the best of the scraps he was given.

Me And The Biz – I’ve always loves this one. Legend has it that fellow Juice Crew member, Biz Markie was supposed to make an appearance on this song, but for some unforeseen reason was unable to make it to the recording session. So Ace took it upon himself to make the duet by himself, providing his impersonation of Biz, which turned out to be a genius move, as this song did generate a little buzz back in the day.  The video for this one was pretty entertaining as well. Check it out for yourself.

, and arguably Ace’s entire catalog.  Ace takes on the perspective of a poor black man (or three?) depicting the struggles of a poor ghetto dweller trying to survive on the “other side” over three verses.  Marley’s instrumental serves as the perfect backdrop for Ace’s commentary, which is meaty, gritty, and authentic.  This one should tug on your heart and make you a little uncomfortable. Which are all qualities of good art. Brilliant job, Ace.

Ace Iz Wild – Ace gets loose over a playful and entertaining Marley instrumental. This was a nice way to break up the tension and serious mood  that”The Other Side Of Town” left in the air.

Four Minus Three – Ace recycles the instrumental used on the legendary posse cut “The Symphony” for this one and aptly calls it “Four Minus Three” in honor of the three missing emcees (Kane, G. Rap, and Craig G) this go round.  While this will never measure up to “The Symphony”, Ace spits one long verse proving that he is more than capable of holding things down solo.

Can’t Stop The Bumrush – Okay. This might be why Mister Cee didn’t see more work as a producer.  Well, they can’t all be winners.  Next…

Movin’ On – Ace moves back to a more serious tone as he spins three tales of bad decisions he has (or at least the character he’s playing) made and moved on from.  I still chuckle at his line writing off  the victim of a beat down’s street cred because he rocks penny loafers. This was a decent listen.

Brooklyn Battles – I absolutely love Marley’s laid back instrumental: the bass line, the whistling, and sampled harmony on the hook make this immediately addictive.  While Ace’s verses are decent the instrumental is the true standout on this one.  I need another hit.

Maybe Next Time – This could have been left on the cutting room floor.

Postin’ High – A dedication to those who have made it financially and can afford to shine and bling.  Ace isn’t hating on these individual, he actually approves of the lifestyle, but he also reminds the listener in the final verse not to make material possessions “the most important whisker on your cat” (it’s all about balance, yo). Mister Cee provides his third instrumental of the night (which samples the Crusaders classic “Street Life”).  While the instrumental is not great it works well with content and feel of the song;  and it sounds much better than the hot mess that was “Can’t Stop The Bumrush”.

As I Reminisce – Years before Pete Rock and C.L. Smooth “reminisced” Masta Ace was through it before they learned what to do with it.  Ace invites special guest Masta Ice and Unique to the booth who each spit two verses (and sound really good in the process) reveling in the nostalgia that was their respective childhood.  Ace raps (pun intended) things up with the final first lamenting over the lost innocence of his youth.  All three emcees do a great job of bringing their rhymes in a conversational tone that sounds believable. Mister Cee provide his best instrumental of the night (completely redeeming his self for that mess on “Can’t Stop The Bumrush”), which includes a saxaphone sample laced throughout the track that meshes beautifully with the emcees content.  Brilliant.  This is arguably my favorite Masta Ace song of all time and easily the best joint on Take a Look Around

Take A Look Around – The title track is actually Ace sharing a spoken word poem over the same instrumental used on Gil Scott Heron’s classic “The Revolution Will Not Be Televised”.  While Masta Ace was never consider a “conscious” emcee, in his early days he definitely wasn’t afraid to address societal ills and injustices (an attribute he would moved away from on his future projects).  There is a lot of meat in his poem.  And the church said: amen.

Together – Ace closes the show with an inspirational song, which while its kind of corny still manages to work.

Take a Look Around

is a solid debut from Masta Ace. He does a good job of balancing substance with empty emcee crap, and manages to keep it all entertaining. There are a few bumps in the road, but those bumps are so far and in between that you probably won’t even notice them. Thanks for the underappreciated treat, Ace.