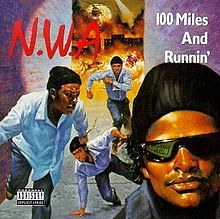 For those who have not read my previous posts (or who are just unfamiliar with the drama) I’ll start with a quick recap on the N.W.A. saga at this point in the timeline:

, beginning his quest on taking over the world and becoming on of the most successful emcees of all time (later proving his line from “No Vaseline” accurate, as he literally “dropped 4 niggas and started making all the dough”).  This left N.W.A. in an interesting position.  With their strongest emcee gone, the remaining 4 disgruntled negroes were left with a lot of unanswered questions.

Nevertheless, N.W.A. still was a huge name in the game in 1990.  Without Cube they could still rely on Dre’s beats, Eazy’s personality (and squeally voice), Ren’s sharp lines, and Yella’s…uh, yeah.  In an attempt to keep the N.W.A buzz alive and build up anticipation for their forthcoming full length album (Niggaz4life

ep in 1990. It went on to reach gold status in less than 3 months of its release and eventually would earned the quartet a platinum plague.

Now, lets revisit the beginning of N.W.A’s life after Cube.

100 Miles And Runnin’ – This is the only single released from this EP.  Ren, Dre, and Easy (in that order) each get a verse and divide  the 4th verse amongst the three of them. Dre screams his verse as if he’s the long-lost 5th member of Onyx, and also manages to take a cheap shot at Cube in the process.  Dre’s instrumental fits the title as it has an urgent and epic quality to it and still sounds sick 20 plus years later.  This song was very important for the group, as it proved even after loosing their most talent emcee N.W.A. could still create entertaining music.

Just Don’t Bite It – This starts of as an infomercial for women on how to give phenomenal oral pleasure, before it segways into a Ren solo joint that he spends the course of three verses sharing tales of different women who have provided this pleasure for him.  His second verse is extremely comical, as our simple-minded host explains his decision to have a chick go down on him instead of having intercourse, so not to risk contracting a STD (I guess the moron has never heard of herpes).  Ren’s content isn’t covering any new ground but he rides Dre’s smooth instrumental like a seasoned prostitute on the pole of loyal John who tips well.

Sa Prize (Part 2) – This is the sequel to “Fuck The Police” (thus the “Part 2”; although I’m not sure why they didn’t just title it “Fuck The Police Part 2″…maybe pressure from the label?).  All three rappers come off pretty nice as they address police brutality and the overall bad blood between the black community and the Police Force (which would reach its violent peak a year after 100 Miles & Runnin

release).  Dre’s instrumentals sound miles ahead of the production on the albums used on the previous albums released in 1990 (or at least the ones I’ve recently listened to).  East, west, and all points in between: Dre’s arguably the greatest hip-hop producer of all time.

Real Niggaz – Ren, Dre, and Easy take you into the mind of “real niggaz” , as they call out all the fake ones biting their style; and of course Dre manages to sneak in another shot at a Ice Cube. I love Dre’s dark and menacing instrumental. Ren, Dre, and surprisingly, Easy, all mesh with the instrumental nicely.

sounds like when you say it backwards (so I’m told; I’ve never played the vinyl backward to confirm).  This is nothing more than a 2 minute promo of them repeatedly saying “Kamurshol” over, and over again.  Unlike Nas who years later hinted at using the controversial term as the name us his album (Untitled

), N.W.A. actually stuck to their guns, in spite of label pressure.  Not much to see here folks, but Dre’s instrumental was pretty dope.

Upon its release 100 Miles & Runnin

did an excellent job accomplishing what it’s intention was upon its release: give the listener a little taste of N.W.A to keep his or her interest peaked until the next full length release.  23 years later, and now knowing that two of the five songs from this EP (“Just Don’t Bite It” ((which they changed the name to “She Swallowed It”)) and “Real Niggaz”) would be included on the Niggaz4life

album, hindsight has tarnished the EP’s initial achievement, while simultaneously proving just how illmatic time can be. Regardless, 100 Miles & Runnin

proved that N.W.A still packed a solid punch after losing their most potent lyricist.  Dre’s production only improved since the group’s last go round, and although Ren never had the charisma (or lyrical content) of an Ice Cube, he proves he can hold his own as the lead emcee on this release.  Dre and Easy have never been great emcee but all three mesh together fairly well over this 5 track experience.  Too bad this was the start of the ending for our Compton brethren.