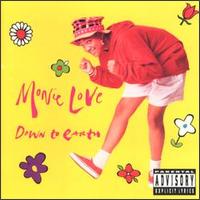 I was first introduced to Monie Love thru a few cameos she made in 89′: one, on the remix to De La Soul’s classic posse cut “Buddy”, the other on Queen Latifah’s “Ladies First”. These collabos would work in Monie’s favor, since both songs were released as singles, whose videos got a lot of airtime back in the day and expose the world to Monie’s charm and cuteness.  It was also a smart move to align herself with arguably the greatest hip-hop collective of all time (that’s the Native Tongues, for those keeping score at home). These wise choices (or furtunate opportunites) would eventually lead to Monie inking a deal with Warner Bros. and releasing her debut album Down to Earth

in 1990, making her the first british hip-hop artist (male or female) singed to a major label.

would go on to be a commercial success, earning Monie a Grammy nod for Best Rap Solo Performance in 1990 for “Monie In The Middle”, and again the following year for “It’s A Shame (My Sister)”. She lost both times (first to Hammer and then LL (for his monster album, released earlier the same year, Mama Said Knock You Out

)), but how many female emcees can say they were nominated for Grammys in consecutive years?  And this was before the category was broken down by gender.

As you all should know by now, great records sales, prestigious accolades, aligning your self with a legendary crew, and being british does not automatically equal a classic album.  On that note, lets give her a listen.

Monie In The Middle – The first single released from the album finds Monie sharing a tale of a high school love triangle that she’s involved in.  Actually, it might be better described as a stalker’s triangle that has Monie’s sweating a guy she repeatedly refers to as”the lover”, while she’s being followed into the ladies bathroom by a (not so secret) admirer of her own.  I remember the video matching the Monie’s lyrics in playfulness. I love the sick organ used during the instrumental, brought to you courtesy of Andy Cox and David Steele (yeah, I don’t know who they are either). According to the liner notes, Bootsy Collins had a hand in the production?  Weird much? I didn’t see/hear that one coming.  Regardless, nice start to tonight’s show.

It’s Shame (My Sister) – This is probably my favorite Monie Love song in her entire catalog, but when you considering she only has two albums to date (and a few cameos here and there) that’s not saying much.  The production duo of Cox & Steele (which sounds like a good name for a porno) strikes again, this time sampling The Spinners classic of the same title (minus the “My Sister”).  Monie uses this one to encourage a friend in a bad relationship to call it quits and move on.  Monie is a decent emcee but the production on the first two songs definitely out shined her vocals.

Don’t Funk With The Mo’ – Afrika Baby Bambaataa (of the Jungle Brothers), Kevin Maxwell, and Jerry Callendar (which I will simply refer to as Afrika & Associates for the rest of this write-up) collaborate for their first production credit of the evening.  They provide a simple funk instrumental for Monie to give a brief run down of her start in the rap game,  which includes a crooked producer who tried to get more credit than deserved for his role in getting her signed (three sides to every story:his, hers, and the truth is somewhere in between).  Monie gives her mom credit for her pursuing hip-hop as a career, after she apparently encouraged Monie to go for it after Monie spit a rhyme that made her little nephew smile.  Wow, if impressing your mom with your rhymes and making a little kid smile are the only criteria for being an emcee, that explains why the genre is so polluted with garbage rappers.  Regardless, this was a decent listen.

Ring My Bell – Remember in 1990 when house music was the lick and everybody and their mama, including hip-hop, jumped on that bandwagon? Well, Monie Love was not exempt from that fairweather ride.  Some dude named Richie Fermie provides a lame ass house beat for Monie’s feeble attempt to make a lame ass dance hit.  Guest vocalist Ultra Nate’s underwhelming contribution only adds insult to injury.

R U Single – Monie’s posing the question to a prospect at a bar/club/party, I assume, since she mentions he’s buying her a drink in the first verse.  I respect Monie’s honesty but who tells a dude they’ve just met at a club all about their five-year old daughter,  baby daddy drama, then randomly mentions they have “a mother minus a father”, and before the guy can ask what happen to her dad, she tells him not to ask her whether or not her parents are divorced.  Wft? Why did you bring it up then? These are all tell-tale signs of a physco woman, bro.  Afrika & Associates provide their second production contribution of the night, which is a lot worse than their first go round.  This song sucked.  Suddenly Down to Earth

is falling beneath it.

Just Don’t Give A Damn – The production firm of Afrika & Associates somewhat redeems himself from the previous song’s failure, as he provides a decent backdrop for Monie to discuss a relationship with her man who has left her the victim of domestic violence (she mentions not allowing her babby daddy to see his daughter, which left me wonder if this was a true story based on her relationship with her baby daddy…any one with the inside story on this hit me in comments).  I did enjoy the instrumental but it seemed a bit too light-hearted for Monie’s content.

Dettrimentally Stable – I can say without a doubt, Afrika (& associates) is not a top 10 hip-hop producer on anyone’s list; and after this one I’m not looking forward to the remaining three songs he’s got a hand in.  This was the audible equivalent to watching paint dry.

Down 2 Earth – True humility needs not a song, but speaks for itself. But if you disagree with me, like Monie apparently does, don’t hire Afrika & Associates to produce it.

I Do As I Please – Awe, what better way to follow-up the previous song then with a song title that screams humility.  Cox & Steele return to the production helm for this one, but unfortunately the magic they once captured earlier on Down to Earth

Read Between The Lines – This is my other favorite Monie Love song of all time, and again it’s more so based on the instrumental, which was, surprisingly brought to you courtesy of no other then…Afrika & Asscociates!!!  Monie’s content sounds like something Q-Tip would have spit. As a matter of fact it would have been nice to see the Abstract Poetic make a cameo, which wouldn’t be much of a stretch considering both Tip and Afrika were both a part of the Native Tongue crew. A brotha can dream, can’t he?

Swiney Swiney – Afrika & Associates provide a stale instrumental for Monie to proclaim her distaste for the other white meat.  She points out how pork contributes to heart disease, high blood pressure, obesity and, worms? Wtf?

Let’s be real: Monie Love is not on anyone’s greatest of all time list (even if you break it down by gender she doesn’t belong in anyone’s top 10).  Don’t get me wrong, she’s not a terrible emcee, but far from great.  Monie’s greatest strength, which she was able to display on her previous cameos appearances, was her ability to work well within a team setting; but unfortunately for Monie (and the listener) Down to Earth

isn’t a group effort. Over the course of 13 songs (without any guest emcees) Monie’s vocal tends to  gets lost in the music and at times its even a challenge to make out her words (which is probably something she was aware of since all the songs lyrics are printed in the insert) . Speaking of music, about 75% of her instrumentals are garbage, making most of Down to Earth

forgettable and definitely unable to hold its weight today.  She’s still cute, though.