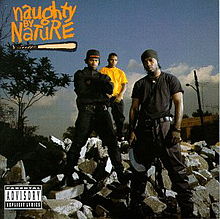 Many may remember today’s album as the debut for the native New Jersey trio Naughty By Nature. Technically, this is correct. Treach, Vin Rock, and Kay Gee originally went under the name New Style and had a brief stint on MCA where they released one album (Independent Leaders

) before being dropped after the album flopped. As any of you that read this blog on a regular basis know, I’m a strong believer that record sales don’t define the quality of the record, but Independent Leaders truly did suck.

New Style decided to change their name to Naughty By Nature, hooked up with Queen Latifah’s Flava Unit and signed a deal with Tommy Boy Records where they would completely revamp their style and sound, releasing their self titled album at the end of the summer of 1991.

would go on to earn the trio their first platinum plaque as it also garnered heaps of critical acclaim in the process.  In 1998 The Source would rank Naughty By Nature

one of the 100 greatest hip-hop albums of all time.

I remember wearing this cassette out back in the day. Let’s see if it hold’s up 20 plus years later.

Yoke The Joker – Treach comes out swinging with a hunger he lacked on Independent Leaders. Kay Gee crafts a dark synth instrumental with a bit of horror movie feel, that Treach devours with ease and sounds like he could murder seconds and thirds. This is one of the greatest opening tracks in hip-hop history. Yeah, I said it. Man, I miss 91′.

Wickedest Man Alive – The Jersey trio lighten the mood created on the previous track as they invite their Flava Unit General (or Queen) Latifah to sing the hook over this dancehall tinged instrumental. Treach picks up where he left off at on the previous track as he shreds this one with ease, leaving proof that he is one of the most underrated emcees to grip a mic.

O.P.P. – This is arguably Naughty’s biggest hit (the only other competitor would be 19 Naughty III

. O.P.P. is an acronym for Other People’s Property, or if you want to get specific: property can be substituted with penis or pussy (as Treach explains in code on the second verse). In laymen terms, the question posed is: are you down with cheating?. Kay Gee samples The Jackson 5’s “ABC” for the backdrop. This would go on to become a bona fide pop hit. I’ve never been crazy about this song but it’s not terrible.

Everything’s Gonna Be Alright (Ghetto Bastards) – This was the second single released from the album and easily my favorite song in the entire Naughty catalog. Kay Gee samples Boney M’s version of “No Women, No Cry” (the Bob Marley classic), the Staple Singers “I’ll Take You There”, and the Lafayette Afro Rock Band’s “Hihache” to create the emotional backdrop for Treach to pour out a heartfelt look back at his childhood growing up as a ghetto bastard. This might be the only time in Treach’s entire catalog that he gets this personal but he does a stellar job doing in the process. “If  you aint from the ghetto, don’t ever come to the ghetto, cause you wouldn’t understand the ghetto, so stay the fuck outta of the ghetto”.  Classic record.

Let The Ho’s Go – Kay Gee’s dark mid-tempo instrumental reminds me a little of “Yoke The Joker”, only not as sinister. Treach continues to shred any beat put in front him.

Every Day All Day – Our hosts slow things down a bit on this smoothed out jazz tinged instrumental as Treach continues is onslaught of Kay Gee’s production. There is also a Vin Rock sighting on this one as he says a few words at the beginning of the song. The live saxophone solos sprinkled through the song was nice touch. Well done.

Guard Your Grill – Kay Gee’s hard instrumental takes things back to the gutter and Treach approaches this one like double dutch ropes, waiting for the right time to jump in, stay in pocket and master the rhythm. I still chuckle at Treach’s line about having the “flyest ride out here, a 91′ bus card”. It was also nice to hear Treach shoutout Grand Puba Maxwell (of Brand Nubian) as I’ve always considered both emcees to be severely underrated.

Pin The Tail On The Donkey – Kay Gee uses the same sample Pete Rock used for his classic record “The Creator”, only minus the sick horns on the hook. Even though Pete’s interpretation of the sample is stronger, Kay Gee’s still works. On the flip side: Treach sounds a billion times better spitting over it than Pete did. Oh yeah, Vin Rock spits exactly 3 lines on this one.

1,2,3 – Treach invites fellow Flava unit alum Lakim Shabazz and Apache (RIP) to the studio for this cypher session. Both guest do a decent job but Treach bats last and quickly steals the show while taking a shot at fellow Jersey emcee YZ (to read more about how that beef developed click the link). I remember loving this song back in the day; and while it may not sound as good to me today, it still works. Damn, Vin Rock can’t even get a verse on a cypher joint on his own album? Wtf?

Strike A Nerve – 10 songs in and finally Vin Rock gets to spit his own verse. Even better, he and Treach both get two verses a piece. Vin sounds okay (I have a sneaking suspicion Treach penned his rhymes) but of course Treach owns this one (“my pants always sag cause I rap my ass off”). Kay Gee’s instrumental is best described as simple, bouncy and rough. Well done.

Rhyme’ll Shine On – Kay Gee slows thing way down as he samples The Isley Brothers, Earth Wind & Fire, and Funkadelic to concoct the smooth backdrop complete with a live piano solo during the bridge. Treach holds down mic duties as usual and our hosts invite vocalist Aphrodity to sing on the bridge and she turns in a serviceable rendition. This one is good for after hours listening.

Thankx For Sleepwalking – That has to be the most ridiculous way I’ve ever seen “Thanks” spelled; they could have at least left off the “k” and kept the “x”. Regardless of the song title’s spelling, Treach takes two verses to call out the ladies who slept on Naughty and caught the vapors once they blew. I like the live keyboard work on this one.

, which was also included on the Juice Soundtrack

, released later the same year. Kay Gee’s  instrumental starts off with dark synth piano notes before gradually maturing into triumphant organ cords. Treach sounds right at home over it as he firmly plants his flag in hip-hop’s surface as a contender for the imaginary crown. Vin turns in a serviceable performance as well. One of my favorite Naughty joints.

What a difference two years and a name change can make. When we last saw the Jersey Trio they were struggling to find their way as their production was inconsistent and Treach was still trying to find his footing as a viable emcee. Two years later Kay Gee found a sound that worked well, mixing synth heaving sounds with samples and live instrumentation, while Treach went from mild manner David Banner into full-blown Incredible Hulk. And Vin Rock went along for the ride. From beginning to end, every song on Naughty By Nature works. Kay Gee’s instrumentals are entertaining and Treach is a monster on pretty much every track.  I repeat: there in not one song on Naughty By Nature

that should have been left on the cutting room floor, which is really impressive considering the album’s 13 track length. Many hip-hop historians consider 1991 the finest year in hip-hop, Naughty By Nature

is one of the reasons why.