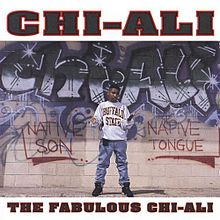 Remember ABC? Another Bad Creation? They were the little nappy knucklehead kid group that Michael Bivens put together in the early nineties. They brought the world such hits as “Iesha” and “Playground”, which helped them sing and rap themselves to a platinum plaque for their debut album Coolin’ At The Playground Ya Know! (an album that I shamefully own but will definitely not include in this blog). Michael Biven’s success with ABC would cause another up and coming Atlanta producer to jump on the kiddie bandwagon as well. Jermaine Dupri discovered his guinea pigs while at an Atlanta mall, and would eventually form the backwards dressing braided hair Atlanta-based rapping duo, Kris Kross. With JD as their puppet master, Daddy Mac and Mac Daddy would make ABC’s success look like a failure as they would move over 4 million units of their debut album Totally Krossed Out (another album that I shamefully owned in my cassette buying days…don’t know if I ever bought it on cd, though) on the strength of their mega hit “Jump”, which actually takes shots at ABC’s catch phrase “mental” and their signature style of wearing their clothes inside out. Kiddie beef. Cute. The success of these two groups opened the door for kids in hip-hop, as they proved you didn’t have to be grown to sell records.

One of the kid rappers to pop up around this time was Bronx native and Native Tongue affiliate, Chi-Ali. I first became familiar with Chi from his cameo appearance on Black Sheep’s cipher joint “Pass The 40”, and assumed he was Dres’ little brother as he looked like his mini me (there is no blood relation between the two). Based on his relationship with NT and probably more importantly his relationship with Chris Lighty co-founder of the Violator label, Chi signed a deal and released his debut album

The Fabulous Chi-Ali on the Violator/Relativity label. Chris and Chi recruited then, up and coming production team the Beatnuts, to produce the entire album (with the exception of 1 song), while Chris Lighty and Fashion (from the Beatnuts) would help Chi-Ali write his rhymes.

Unfortunately the album didn’t move a ton of units and Chi-Ali was quickly gone from the music scene. Then in 2001 he was back on TV, but it wasn’t in a music video. He was on John Walsh’s America’s Most Wanted for the January 14, 2000 murder of his baby mama’s brother over a money dispute. He was eventually apprehended and sentenced to serve 12 year in prison. He was released in 2012. Sadly, he’s probably best remembered for murder rather than his music.

Intro – It plays exactly how it reads.

Maniac Psycho – A pre-puberty voiced Chi-Ali shouts empty threats over one of the weakest Beatnuts instrumental that I’ve ever heard. Did he really just say “Chi-Ali, the closest thing to God”? The LL “Mama Said Knock You Out” vocal sample on the hook was nice.

Step Up – Chi leaves the shouting at home on this one as he raps in a more relaxed tone. The Beatnuts hook up a quality backdrop that Chi uses to brag and boast about his lyrical prowess. Unfortunately, he doesn’t bless us with any memorable quotes. This was still a decent listen.

Funky Lemonade – This one features more boasting and shit talking from our host, who at one point threatens to wet his competition like a pool (early signs of his troubled future, maybe?). The Beatnuts hook up a lovely instrumental built around a Kool & The Gang sample and a sick “wah, wah, wah” sample sprinkled throughout the song. I like this version but the Beatnuts outdid themselves on the nasty remix.

In My Room – Keeping thing on the mellow side, the Beatnuts hook up a scrumptious backdrop that Chi uses to talk the girls into entering his room for a little hanky panky. Cute.

Age Ain’t Nothin’ But A # – For you youngins, the “#” in the song title is short for “number” not “hash tag”. This is the only track on The Fabulous Chi-Ali

that the Beatnuts did not produce. Instead, Mista Lawnge from Black Sheep, hooks up a smooth instrumental, looping up Ben Vereen, Stanley Turrentine and Roy Ayers records with a vocal sample from BDP’s “Criminal Minded” for the hook. Chi uses this one to dis girls his age, as he claims even though they have bangin’ bodies they’re not mental mature enough to be his lady. To listen to a 14-year-old speak about such a subject is hi-larious. Still an enjoyable listen, though.

Shorty Said Nah – Ah, what would a nineties hip-hop album be without a James Brown sampled instrumental. The Beatnuts loop up JB’s “The Payback” record as Chi turns a trip to get his slong wet into an epic action packed thriller, and you best believe there is gunplay involved. At least one of Chi’s rhymes will make you laugh (or at least chuckle)during the course of this song.

Let The Horns Blow – Chi-Ali invites a few of his Native Tongue brethren (Phife Dawg, Dres, and Trugoy), to the cipher, along with Fashion from the Beatnuts. It was kind of nice to hear this collective together. Not spectacular, but still enjoyable.

Roadrunner – I never cared much for the album version of this song, but the Tribe Called Quest produced remix is a monster. Both this remix and the remix for “Funky Lemonade” were recorded after Chi-Ali’s voice begin to change, so his vocal pitch is a bit deeper than it was on any of the songs on The Fabulous Chi-Ali

, hence the reason the remix for this song is called the “Puberty Remix”. Both remixes also include new and improved lyrics from Chi as well.

The Fabulous Chi – The instrumental was cool, but Chi doesn’t say anything worth noting.

Looped It – Not a fan of this one.

Check My Record – Insert comments from “The Fabulous Chi” here.

Murder Chi Wrote – Over a dark Beatnuts produced instrumental, Chi-Ali recalls an evening out on the town with his partner Chris Lighty, in search of a good time with some cuties that quickly turns into a bloody mess. No, the song has nothing to do with menstrual cycles.

Chi-Ali Vs. Vanilla Shake – The Beatnuts use the same guitar loop from the Nite-Liters’ record “Damn”, that Dr. Dre would use a few months later on his banger “Lyrical Gangbang” from the monster album that was The Chronic. Of course the good doctor would make his interpretation stand out more by laying some Led Zeppelin drums (“When The Levee Breaks”) underneath the guitar licks, but that’s just why he is arguably the greatest producer in hip-hop history; but I digress. Chi uses this one to battle the fictional rapper Vanilla Shake, which I believe you all are sharp enough to figure out who that is a jab at. Like any well scripted and recorded battle song, the album’s host gets the victory.

. The Beatnuts hook up an instrumental that has a semi-house sound, that Chi-Ali uses to talk about how much he loves to dance when he’s note bangin’ out honeys, drinking, smoking, or wetting brothers like pools. On paper it probably sounds like a disaster but this Beatnuts instrumental is actually pretty enjoyable.

Looking back at Chi-Ali’s short-lived music career, it’s probably not fair to put him in the same category as Kris Kross, Da Youngstas, or Another Bad Creation. Yes, he was a kid rapper (who had adults writing for him), but unlike his contemporaries Chi was not trying to reach the kid demographic. Chi rolled with the well-respected Native Tongue collective and rhymed over real hip-hop beats, not contrived concepts and intentionally pop sounding instrumentals, like his peers. Unfortunately, Chi-Ali was just not that nice on the mic, so like the chick on the last verse of “Age Ain’t Nothing But A #”, the more mature listener kind of brushed Chi-Ali off with the dirt and dandruff on their shoulder. For the most part the Beatnuts (and Mista Lawnge) hook up quality production on The Fabulous Chi-Ali

, but his boasts, threats, stories, and adult like content are hard to believe when delivered from the high-pitched vocal of a little fourteen year old snot nose. If you’re a fan of the Beatnuts’ production (like myself) and aren’t expecting to hear a spectacular rhyme display, then you’ll enjoy The Fabulous Chi-Ali