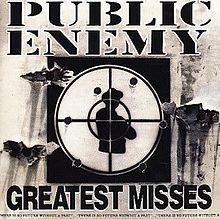 As important as the Beastie Boys and LL Cool J were to help build the Def Jam empire, just as much credit should be given to Public Enemy for helping sustain it during the late eighties to mid nineties. While going against the grain and taking on a pro-black-politically charged stance, Public Enemy was able to move large amounts of units, while not making intentionally pop records and maintaining their street cred. Their first 5 full length Def Jam releases would go on to earn PE either a gold or platinum plaque. Today’s subject, Greatest Misses

, would earn our militant brethren a 6th plaque.

As the liner notes say “this is not an album”, but was intended to be a little something to hold PE fans over until the release of (what according to the liner notes was supposed to be released in 1993 but didn’t come out until 1994) their 5th full length, Muse Sick-n-Hour Mess Age. Greatest Misses

was released in the fall of ’92, and consisted of six new songs from PE, along with six remixes of songs from their previous albums, and one live recording. Greatest Misses

would earned PE a gold plaque and was also nominated for a Grammy for Best Rap Performance by a Duo or Group.

I found this one at a used music spot for a couple of bucks a few years back. I never listened to it until today, and I’m hoping it’s more entertaining than the lackluster experience that was Apocalypse ’91.

spitting politically charged rhymes over a Bomb Squad, Paul Shabazz and Kerwin (Sleek) Young, co-concocted backdrop. I’m amazed that it took so many heads to come together to create such and underwhelming record.

Hit Da Road Jack – This Imperial Grand Ministers Of Funk instrumental is so bland it could be used to treat ulcers. Chuck D’s rhymes were probably decent, but the song was so boring I stopped paying attention.

Gett Of My Back – Flavor Flav goes for self on this one, warning the listener to avoid getting involved with drugs (specifically, coke), because it’s a bitch to get that proverbial monkey off your back. This was not good. Flav spews the same nonsensical verse three times, and the dreadful hook combined with the garbage Bomb Squad instrumental are enough to push one into a snorting habit.

Gotta Do What I Gotta Do – On this one Chuck D defends his freedom of speech and vows never to bite his tongue on the mic. He sums it up best with his line “I gotta do what they don’t like, cause I gotta mic”. The Bomb Squad produced track is less busy than most Bomb Squad instrumentals, and it’s a thing of beauty (I love the organ sample sprinkled in throughout the song). Side note: this song was also included on the Trespass Soundtrack, released a few months later.

Air Hoodlum – Over a decent instrumental produced by Dr. Treble N Mr. Bass, Chuck D goes into storytelling mode. He shares a tale of a ballplayer named Mickey Mack, who because of his superior athletic ability, gets an academic pass and slips through high school and college, only to graduate, barely knowing how to read or write. After being drafted in the NBA, Mickey suffers a career ending injury, and his life takes a turn for the worst when he’s forced to rely on a back-up plan. This was executed well and very entertaining.

Hazy Shade Of Criminal – The Imperial Grand Ministers Of Funk redeem themselves from the hot mess that was “Hit The Road Jack”, and hook up a disgusting backdrop for Chuck D to spit over. Chuck gives examples of some of the criminal acts the white man and the government are guilty of since coming to North America, and asks the rhetorical question on the hook “who’s the criminal? Chuck leaves the listener with a lot to chew on. This is easily the best of the 6 new songs on Greatest Misses

Megablast (The Mad Skillz Bass Pipe Gett Off Remix) – The original version of this song was on PE’s debut Yo! Bum Rush The Show. I didn’t care much for the original, and this Damon Dollars remix is just as unimpressive as the original.

Louder Than A Bomb (JMJ Telephone Tap Groove) – The original version of this song was on A Nation Of Millions, and I absolutely hated the instrumental. Jam Master Jay and somebody going by Chy-Skillz, hook up a nasty instrumental for the remix, giving life to Chuck’s booming voice and quality rhymes. This one is fire!

You’re Going To Get Yours (Reanimated TX Getaway Version) – The original version of this song was on Yo! Bum Rush The Show! This Jeff Trotter remix adds nothing to the original. Matter of fact, all the extra cuts and pauses added in during the verses make this mix kind of annoying.

How To Kill A Radio Consultant (The DJ Chuck Chillout Mega Murder Boom) – The original version of this song was on PE’s Apocalypse 91. DJ Chuck Chillout and a young Salami Remi, handle the remix for this one, and it’s a complete failure. The Imperial Grand Ministers of Funk instrumental on the original mix, had an urgency that matches Chuck D’s energy and content. The remix is way too calm, laid back and cute for Chuck’s rhymes.  If it aint broke, don’t fix it; or in this case, fuck it up.

Who Stole The Soul? (Sir Jinx Stolen Souled Out Reparation Mixx) – Sir Jinx takes a stab at remixing Fear Of A Black Planet’s “Who Stole The Soul?”. I love the added Eddie Murphy vocal sample taken from a SNL skit. This was equally as cool as the original, but nothing life changing.

Party For Your Right To Fight (Blak Wax Metromixx) – Greg Beasley provides the instrumental for this remix that was originally on A Nation Of Millions. I didn’t really like the original and the feeling is mutual for this remix.

Shut Em Down (Live In The UK) – After the sound man corrects some apparent technical difficulties with the track, the Pete Rock remix instrumental drops and PE does exactly what the song title suggests. Not a big fan of live recordings, and this one does nothing to change my stance.

is almost a complete waste of time. Only half of the new songs are any good (“Gotta Do What I Gotta Do”, “Air Hoodlum”, and “Hazy Shade Of Criminal”), and only one of the remixes is worth your while (“Louder Than A Bomb”, which is actually really good, and the best song on the album). With a 4 out of 13 success rate (which is slightly better than DeAndre Jordan’s career free throw shooting percentage), it would have been more appropriate for PE to remove Greatest from the title and simply label this one Misses.