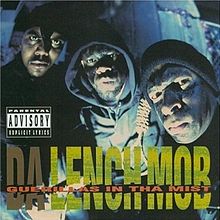 By 1992, Ice Cube was arguably the hottest rapper in the game. After leaving N.W.A. he released back to back critically acclaimed and platinum selling solo albums, and begin to get his feet wet in Hollywood, with his debut starring role as the L.A. gangster, Doughboy, in John Singleton’s 1991 hood classic Boyz N The Hood.  1992 would also be a good year for Cube on the music end. Near the end of the year he would release his third and most commercially successful album The Predator (more on that later), and we would see the debut album Guerillas In Tha Mist

Though Cube’s full Lench Mob crew runs a lot deeper than 3, the rap group would consist of J-Dee, T-Bone, and Shorty. Cube might as well have been the 4th member of the group as he makes several appearance throughout GITM

(and penned most of the album), as well as produced the entire project, with co-production credits going to T-Bone, Rashad, Mr. Woody and Chilly Chill. And like everything else Cube touched in the nineties, GITM

In 1993, J-Dee would be sentenced to 29 years to life for the murder of his girlfriend’s male roommate. Da Lench Mob would replace him with a rapper named Maulkie, and released a second album Planet Of Da Apes in ’94, but not even Cube’s presence could help that album go wood. Needless to say, that would be then end of Cube’s short-lived vanity group, but his individual star power was just beginning.

Capital Punishment In America – The album opens with a simple drum pattern laid underneath a string of sound bites that sound like they were taken from a documentary about the history of capital punishment in America and the different execution methods used over the years. I guess the purpose of this intro was to, in around about way, explain the group’s name and introduce them to the world.

Buck Tha Devil –  Ice Cube joins his Lench Mob brethren on the first song of the evening (rightfully so, since he wrote the song as well), as they express their disdain for the white man and their desire to rid him from the face of earth for all his dastardly deeds. As menacing at they may sound, the fact that Ice Cube now makes family movies, makes their violent rhetoric sound unbelievable. The instrumental is nice, though. The siren like loop gives the song an uncomfortable feel, while the heavy tribal drums laid underneath it give the track a strong foundation.

Lost In Tha System – J-Dee gets his first solo record of the evening. Over a simple guitar loop, J-Dee recalls a Friday that starts out fine, until he takes a trip to the liquor store, decides to drink and drive, which leads to him running a red light and getting pulled over by a cop, who places him under arrest after discovering he has two warrants. From there, things get progressively worse for J-Dee, as he gets into a fight with a fellow inmate and insults a judge; both offenses that get him more time behind bars. By the end of the song J-Dee gets out of jail but states even though he’s back on the street, he’s still lost in the system. In hindsight, considering his fate, it’s almost like that last line was a cry out for help, which is pretty sad. All in all, this was a solid listen.

You And Your Heroes – Cube rejoins his boys as they take shots at quite a few different white celebrities (everyone from Marilyn Monroe to Larry Bird are targets) and fire a few more at some brothers often deemed as sellouts (i.e. Brian Gumble and Arsenio Hall). Ironically, one of the samples used in Cube’s decent instrumental is taken from The Average White Band (contradiction much). Some of their rhymes will make you chuckle a little bit, but overall this song was only average.

All On My Nut Sac – Now here’s one I completely forgot about. Ice Cube and company hook up some ol’ lovely shit with this beautiful instrumental built around a loop from Funk Inc.’s “Goodbye So Long”. Cube plays a drug dealer around the way that J-Dee has grown tired of seeing destroy his community, and seeks to rid him from his block, even if that means putting a bullet in his dome. Over the course of three verses, Cube and J-Dee go back and forth defending both of their stances. The song title really has nothing to do with the song’s content, but it makes for a catchy hook that’s guaranteed to have you singing along with it.

Guerillas In Tha Mist – This was the lead single from GITM

. Cube joins his Mob brethren once again, as he and the crew take things to the (concrete) jungle, declaring themselves guerillas and expressing more of their hatred for the “devil”. And who can ever forget Cube’s classic “with the boom, ping, ping” line (and T-Bone sounds like he could have been the father of Onyx’ style on this one)? Cube and associates hook up a sick instrumental, built around a loop from The Main Ingredient’s “California My Way” (which sounds a lot like James Brown’s “The Payback” ), turning this into an enjoyable listen. The video was pretty sick too.

Lenchmob Also In The Group – Interlude

Ain’t Got No Class – J-Dee gets yet another solo joint. Over a decent instrumental, J-Dee calls out crackhead parents whose habit has caused them to neglect taking care of their kids. B-Reel stops by to assist with the hook and adds an occasional adlib. Overall, this was decent.

Freedom Got An A.K. – Cube lends another helping hand with the rhymes on this one, as he and the boys declare that the only way blacks will ever experience true freedom in America is through violence (“don’t come to me with no petition, fool come to me with ammunition”). The instrumental kind of has that blunted Muggs feel to it, and is pretty decent. The Prince vocal sampled embedded throughout, was a nice touch as well.

Ankle Blues – I forgot about this one. Cube and company build the instrumental around a loop of Lonnie Liston Smith’s “Space Lady”, and it’s a beauty. Shorty goes for self, as he raps about falling asleep while watching Cops and dreams about a reversed world, where the brothers “protect and serve” the community. It’s an interesting concept, that a more skillful emcee would have made more interesting than Shorty. But, oh well; at least you’ll enjoy the dope backdrop.

Who Ya Gonna Shoot Wit That – Not really a fan of this one. And the fact they left the question mark off the song title, really doesn’t help matters.

. Over a somber and beautiful instrumental, T-Bone has a conversation with God (completely abandoning the hyper style he used on the title track), as he seeks relief from the trials and tribulations of being black in urban America. Amongst all the violent and tough guy talk on GITM

, it’s refreshing to hear heartfelt and vulnerable lyrics like this.

Inside The Head Of A Black Man – The album closes with snippets of random yelling, glass breaking, gun shots, and an occasional sound bite of a man saying “Lench Mob”, laid over a simple drum beat. As a black man, I can honestly say these aren’t things that run through my head on a daily basis, or ever.

Time has not done Guerillas In Tha Mist

any favors. Ice Cube and his associates do a pretty solid job on the production side, but the once trendy overly violent pro-black themes, now hinder the album. Even more of a hindrance is Da Lench Mob’s lack of lyrical talent. Take away Cube’s presence and this decent album would quickly turn into a hot mess. Then again, if you take Cube away, Da Lench Mob wouldn’t even exist.