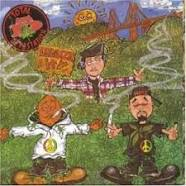 Thanks to groups like Cypress Hill, Redman, Snoop Dogg and Dr. Dre’s mammoth solo debut album, The Chronic, weed became a vogue topic in hip-hop in the early nineties. While many rappers have bragged about getting blunted and provided free advertisement for dealers around the world, the self-proclaimed marijuana band Total Devastation, who may be a forgotten blip in the annals of hip-hop, may also have been the most dedicated hip-hoppers to the weed movement.

Total Devastation is the Oakland based collective of Da Soopa, Red Eye and DJ Tuf Cut Tim (who is also credited as the producer for most of their debut album). The trio released their debut self-titled (and I believe only) album in the spring of 1993 on PGA Records(which was a subsidiary label of Arista), home to such acts as gospel singer Pat Reid (yeah, I’ve never heard of him or the label before today, either). Total Devastation would not only boast of partaking in the herbal essence, but would also serve as advocates for the legalization of marijuana as well (they actually dedicate a full page in the liner notes to contact information for several regional and national groups working for drug law reform). I don’t personally know any one who bought this album back in the day (although I wouldn’t be surprised if Tony A Wilson owns a copy) and would be willing to make an educated guess that it didn’t move many units.

I copped Total Devastation a few months ago from one my favorite used music stores (shout out to Cheapos!) for a few dollars on the strength of the lead single that I kind of dug back in the day (more on that in a bit). I’ve never listened to the album in its entirety until today. So, come and join me on this musical adventure, folks!

Legalize Today! – The album opens with a loop from Peter Tosh’s “Legalize It”, which sets the tone for what you can expect to hear on Total Devastation

Many Clouds Of Smoke – This was the first single and the only song I’ve ever heard from Total Devastation before listening today. Tuf Cut Tim loops up Billy Brooks’ “Forty Days” (which you may recognize from ATCQ’s “Luck Of Lucien”) to create the dope backdrop. So, even though Red Eye and Da Soopa’s rhymes are sub par, you can still enjoy the lovely instrumental work.

Da Soopa Doopa – This is Da Soopa’s solo joint, and everything about this song sucks. Da Soopa just may have the most boring rap voice in the history of hip-hop. And it doesn’t help matters that his lyrics are garbage as well.

Fat Blunt Caper – Total Devastation continues to discuss their favorite pastime, and invite their buddy Da Rymeskeme to help them celebrate. Red Eye takes the last verse and goes on a weird rant about a women accusing him of rape, and him proving his innocence by producing a video tape of the activities (which is also a crime without the lady’s consent, homie). Even before Red Eye’s random rant this song was headed in the wrong direction.

Wonderful World Of Skins – Total Devastation takes a brief break from their favorite topic, to discuss another popular subject in hip-hop: sex, aka skins. It’s pretty clear at this point that Da Soopa and Red Eye aren’t going to impress lyrically, but at least Tuf Cut Tim’s instrumental is decent.

Cloud Nine – More monotonous praise and campaigning for the legalization of weed. Tuf Cut Tim manages to hook up a decent backdrop, but Red Eye and Da Soopa bring absolutely no lyrical value to.

The D.G.F. Style – Total Devastation invites Flymar and Whoop “D” Wham (which will definitely earn him a spot as a candidate for worst moniker) to join them on this cipher joint, as they display their “don’t give a fuck” style. As you probably already expected, no one impresses on this one, but it was kind of interesting to hear Da Soopa fire coded shots at the Oakland emcee Paris (“the devil made me do it, and break the grip of shame (both titles to Paris songs), punk muthafucka stay true to the game…poppin’ that shit about sleeping with the enemy, used to be a friend, but now you’re not shit to me”) and direct shots at N2Deep (“ya tryna sound black, but your shit sounds wack”) on his verse. I’m sure his futile verbal bullets didn’t even leave flesh wounds on his victims.

You’ll Get Blasted – The last line from “The D.G.F. Style” has Da Soopa talking about his tech-nine going “bow!”, which then immediately goes into this song. Da Soopa and Red Eye spend the length of this song threatening to put hot led in their adversaries asses. Threats that are hard to take serious coming from two weed head rappers with a frat boy persona. The instrumental is kind of nice, and the Ice Cube (‘with the boom, ping, ping!”) and RBX (“every night they shoot, it’s like Beirut”) vocal samples are a nice added touch.

Zooted – More praise and worship of marijuana, over a decent blunted instrumental. This time they invite their buddy Nappy (no, seriously…that’s what he goes by) to join them in the festivities.

Hemp Hemp Hooray (Relegalize Today) – The proper albums ends with a blunted instrumental and a man who sounds like he should be a game show announcer, sharing random facts about the history of hemp, and some of them are quite interesting.

Many Clouds Of Smoke (Remix) – The remix uses the same Billy Brooks’ sample as the original, but also includes a beautiful trumpet loop from the same song, giving it a little added flavor, which makes it more enjoyable than the original.

The self-proclaimed marijuana band, stays true to their cause and purpose on their self-titled debut album. Unfortunately, that doesn’t result in quality output. Tuf Cut Tim manages to hook up a couple of nice backdrops, but misses more often than he hits. But the biggest issue I have with Total Devastation

is the emceeing: Red Eye and Da Soopa are both the quintessential wack emcee. From the content, to the lyrics, to the delivery, to their energy, the blunted duo bring absolutely nothing to the table, other than a dime bag of weed and a blunt, of course. Ultimately, Total Devastation

is almost a total waste of wax, vinyl, tape and time.