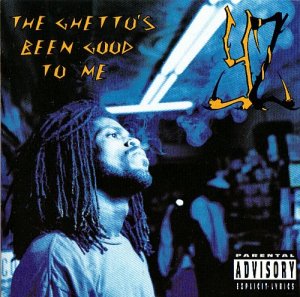 September 28, 1993 was a busy day for hip-hop. Here is the first of three reviews for albums that dropped that day.

Born Anthony Hill, YZ grew up break dancing and battling emcees in north New Jersey in the mid-eighties. After making a name for himself on the local scene for his battling skills, YZ would get the attention of Tony D (best known for being the man behind the boards for most of Poor Righteous Teachers’ first few albums), and the two would form their own Production company, Two Tone Production (because they were both named Tony and one was black and one white…pretty clever). They recorded a demo together that got into the hands of the right people and led to an indie deal with a small indie label, which later led to YZ buying into and becoming part owner of another small indie label (Diversity Records), where he released his first official singles “Thinking Of A Masterplan” and “In Control Of Things”. YZ would later sign Poor Righteous Teachers to Diversity, but according to YZ, Tony D got in Wise Intelligent’s ear and caused a riff between Y and PRT. This lead to PRT leaving Diversity before ever releasing music on the label, and eventually YZ would also leave Diversity and sign a deal with Tuff City Records, where he would release his debut album, Sons Of The Father (an album I’ve never heard, but will continue to wait to listen to until I can track it down for less than $50). Sons Of The Father was received well on the underground scene, and helped YZ get a deal with Livin’ Large, a subsidiary of Tommy Boy, where he would release the follow-up to Sons Of The Father, The Ghetto’s Been Good to Me

. Damn, that was a lot of information.

The Ghetto’s Been Good to Me

(which I will refer to as TGBGTM

from this point on) produced at least two singles that I can recall, but the album came and went without much praise or fanfare. I copped TGBGTM

a few years ago on the strength of those singles, but have never listened to the album in its entirety, until now. And there is no time like the present, folks.

Second To Nobody – The album opens with a dark and dusty Mark Spark produced instrumental that YZ uses to brag and boast, as he takes his shot at the imaginary throne. YZ might not be on the same lyrical level as say a Rakim or Kane, but was pretty nice with the verbs in his own unique way, and it’s on full displays on this opening track. This was dope.

The Return Remix – I’ve always thought it was strange to have the remix of a song before the original version in the album sequencing, but that is exactly what YZ does with this song. He also dedicates the third verse to Naughty By Nature (on the original mix, YZ makes that very clear when he starts off the verse with “I hear somebodies talking naughty naughty about me”), with whom it was pretty common knowledge that he was beefin’ with back then. The TrakMasterz (who now that I think about it have been making dope hip-hop records since the early nineties and well into the new millennium, but never seemed to get the props they deserve) are tapped to produce this one, and they provide a pleasant instrumental, but in my opinion, it’s too clean for YZ’s grimy rhymes. I definitely prefer the rugged Murders The Medicine’s o.g.  mix.

Barber Shop – This was kind of weird. I’ve never been the type that liked to post up and hangout at the barber shop. That’s why I always call (or text) my barber to schedule an appointment, so I don’t have to sit and wait for him forever. But YZ takes the hangin’ out shit to the next level. According to his rhymes, he likes to commit crimes (specifically, shoot niggas) and then chill at the barbershop all day as his alibi. Mark Spark builds the instrumental around the same loop that Marley Marl used for Intelligent Hoodlum’s “Party Animal” a few years prior, but it still sounds proper, even if YZ’s lyrical content is ratchet as hell.

Drink At The Bar – After one catches a body and hides out at the barber shop until the smoke clears, it’s only natural that he heads to the bar for a drink or two. YZ grabs a Becks and treats the PYT he meets to a “Sex on the Beach”, as he spits game to her over a laid back melodic Mark Spark instrumental. This was nice, suitable for listening to after the last call at the bar.

(So Far) The Ghetto’s Been Good To Me – And this is the reason I bought TGBGTM in the first place. YZ gets his first production credit of the evening (with a co-production credit going to Trakmasterz), knocking it out the park with a slightly drowsy bass line, balanced out by perky jazz horns, as our host struts with ghetto pride, confidently boasting about the respect he’s earned with his microphone in these here streets. This one still sounds amazing today.

, this would be the one. YZ sounds pretty solid, as he demands that sucka emcees stop with the bullshit, but Terminata’s chant of the song title during the hook gets annoying, and God Lequan’s instrumental is sub par.

Newborn – YZ is in high spirits on this one, as he anxiously awaits the arrival of his newborn seed. He also gets his second production credit of the evening, but this time it all goes to him without a co-credit, and it’s pretty solid.

Life Under Pressure – I’m not a huge fan of Murder’s The Medicine’s (or Murders The Medicine, as he’s credited in the liner notes on “The Return Of The Holy One”) instrumental, but YZ’s rhymes are colorful and very amusing, as he vents all over this song. It sounds like he may have taken some shots at the Fugees on his second verse when he mentions something about “Ruffhouse is buggin’ suckin’ your dick” and later “when I see a nigga front I wanna knock out his fronts, and kick the bitch in the cunt, all up in my face but she pulls too many stunts” (if you have more info on it, hit me in the comments).

Acid Rain – YZ invites his buddy City Morgue to join him over The Deviators’ dark instrumental, as both emcees take a verse to brag and boast about their greatness. It was hi-larious to hear City Morgue call YZ an ugly “muthafucka” on his verse. Overall, this was decent.

Dead Love – After several listens, I’m still not sure if this one is about a dead lover or if the “she” YZ speaks of is a metaphor or riddle for something else. Regardless of who he’s talking about, his eerie, yet melodic flow, is very intriguing. YZ gets credit for programming the drums, and invites Jamaaladeen Tacuma to play bass and Richard Tucker the rhythm guitar, and the results are damn near hypnotic.

The Return Of The Holy One – See my comments above for “The Return Remix”. And…wrap.

Most hip-hop artist underestimate the importance of an album’s length. I’ve always said it’s best to keep an album between 10 and 13 tracks, that way the listener doesn’t become overwhelmed and are able to digest the complete project and get familiar with the artist. On The Ghetto’s Been Good to Me, YZ does just that. With just 11 tracks, YZ allows the listen to familiarize themselves with his unique style and consume is content, while they nod along to a pretty solid bunch of instrumentals. There are a few mediocre songs on TGBGTM

, but with the album only having 11 songs, it makes listening to the average songs easier to digest. TGBGTM

isn’t a classic album, but it’s solid, and a nice discovery for me.