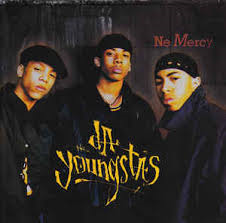 Da Youngsta’s have always been a bit of an enigma to me. When they came on the scene in 1992 with their debut album Somethin 4 Da Youngsta’s, the brother-cousin trio (brothers Taji and Quran Goodman and cousin, Tarik Dawson) were a clean cut kid group with a cute kid image. After the album failed to move units, they decided to go with the current trends of the time an adapted a gimmicky hyper-energy hardcore Onyx-like style for their sophomore effort The Aftermath (and despite their antics, it was still a decent album). The ever evolving Philly threesome would return in 1994 with their third release, No Mercy.

Da Youngsta’s, who have been blessed throughout their career to work with the cream of the crop of hip-hop producers, would call on Marley Marl and his protégé K-Def to handle most of the production work on No Mercy. Like their previous two albums, No Mercy didn’t do big numbers and would be their last album on the East West Atlantic label.

Would Da Youngsta’s find their true identity on No Mercy? And even more important, would the album be entertaining?

Hip Hop Ride – This was the lead single from No Mercy. Da Youngsta’s kick things off paying homage to the emcees who’ve contributed to the culture, past and present (which includes a shout out to A Tribe Called Quest during the first verse (Tribe Degrees of Separation: check)). Marley Marl backs up the trio’s verses with a super West Coast sounding instrumental and its actually pretty dope. There are some glaring holes in their list (including Rakim, KRS-One, Public Enemy and with the exception of Roxanne Shante, all of the Juice Crew, to which, ironically, Marley’s the founder of), but the intent is commendable, and the song’s chill vibes are suitable for playing on a warm summer day.

Mad Props – K-Def gets his first production credit of the night and it’s a banger. Sonically, the track sounds big, with energy that reminds me of some of Just Blaze’s best work. Da Youngsta’s do the best they can with it. Their performance isn’t worthy to collect the mad props they seek, but K-Def definitely earns them for this epic instrumental.

No Mercy – For the title track, Marley cooks up a melodic mid-tempo high energy groove for Da Youngsta’s to talk their shit on and wreak havoc on rival crews. Quran’s Sub-Zero from Mortal Kombat reference was cute (and I’m still scratching my head about Taji’s line: “It’s no mercy cause my rhymes is mental, when I write blood comes out of my pencil”…wtf??), but these dudes aren’t lyrical enough to make anyone quake in their Timberlands. Marley’s instrumental will touch your soul, though.

Backstabbers – By 1994, hip-hop had already given us several “backstabbing” songs, so Da Youngsta’s don’t cover any new territory here. I do like K-Def’s moody production work on this one, even if it is a bit too somber for the subject matter.

No More Hard Times – Being that their dad (and uncle) was somewhat of an established Philly Producer, I didn’t think the Goodman boys (yes, I know Tarik’s last name is Dawson, but majority rules…and I like the way “the Goodman boys” sounds, dammit!) grew up struggling in the hood. But regardless, this song finds the trio celebrating their rise from struggle to success. This song is the first real misstep of the evening. I didn’t care much for the rhymes or Marley’s flat instrumental.

Stayed Away – This is probably my favorite song on No Mercy. K-Def builds the smooth mid-tempo groove around a young MJ sample and an ill Marley-like trumpet loop, as the Goodman boys celebrate their return. The MJ vocal sample on the hook and the song concept would have made more sense had they been on hiatus for a few years, but nigga…ya’ll just dropped an album in ’93. And what’s up with the dramatic pause and introduction before the final verse? Like Taji (who they ridiculously refer to as “Taj Mahal”) is some great lyricist about to spit amazing rhymes? Regardless, there is no denying the dopeness and addictive quality of K-Def’s production work.

Grim Reaper – Initially, I thought Pete Rock produced this one, because the voice sample laced throughout the song sounds like him doing one of his signature adlibs. But to my surprise, Marley Marl is responsible for this stale offering. Oh, and there is absolutely nothing about Da Youngsta’s that would make me, or anyone, fear them. Grim Reaper my ass.

Reality – On this one the Goodman boys discuss the ill shit that comes with being a young black man living in urban America. I love DESTRO’s jazzy instrumental and how it straddles the line between soulful and somber. If you’re a black man in America, this one will definitely make you want a drink after listening to it.

In The City – Da Youngsta’s and DESTRO kind of jack Guru’s “Sights In The City” from Jazzmatazz, as they borrow the theme and sample Carleen Anderson’s vocal for the song’s hook. Unlike the dark vibes Guru’s version let off, DESTRO gives Da Youngsta’s a beautiful jazz-flavored instrumental to spit their commentary over.

People Round Town – DESTRO puts his foot in this one and churns out an ill canvas for Da Youngsta’s to paint upon. The trio do their best “tough guy” act on this one, but it’s not convincing. DESTRO’s instrumental is the truth, though.

What U Feel – Da Youngsta’s end No Mercy with this throw away joint. They don’t really have much to say, but DESTRO’s laid back jazz-tinged instrumental feels good.

Da Youngsta’s seem to have finally found their voices on No Mercy…well, kind of. The trio slip into a nice medium between the cute kid thing and the overly energetic/angry yelling, and deliver semi-decent bars throughout. You’re not going to get fire verses from the Da Youngsta’s, but they definitely have a good ear when it comes to picking quality instrumentals. The Aftermath saw Da Youngsta’s recruiting a handful of hip-hop’s elite producers to provide the soundscape, and they did a quality job. For No Mercy, they call on Marley Marl and K-Def to cultivate the majority of the album’s sound, and they (along with newcomer DESTRO) string together a cohesive batch of vintage mid-nineties jazz infused instrumentals (with the exception of the first track) that fair even better than the previous album. In the hands of more skillful emcees, most of the instrumentals on No Mercy would have the potential to be phenomenal songs and make for a great album. But it’s Da Youngsta’s. So it’s just a well-produced project will disposable rhymes.