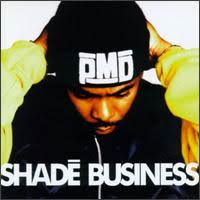 Prior to the release of their fourth album, Business Never Personal, EPMD was dealing with internal strife. In late 1991, Parrish’s home was broken into and when the culprits were apprehended they claimed Erick Sermon paid them to do the job. E-Double was brought in for questioning but no charges were filed, and though the duo would go on to complete and release the album, the tension between them continued to grow. EPMD would finally go their separate ways in 1993. Erick Sermon would be the first to release a solo album in ’93 and Parrish (aka PMD) would release his debut solo album in the fall of 1994, Shade Business.

PMD would handle the bulk of the production work on Shade Business, with a few assists and cameos from members of his Hit Squad. There has been speculation that Russell Simmons (who sided with Erick Sermon after the breakup, which makes sense since E signed a solo deal on Simmons’ Rush Associated Labels) conspired to shit on the roll out and promotion of Shade Business in order to stunt its success (which is interesting considering he shouts out Russell along with the whole Def Jam and RAL staff in the liner notes…he also shout out ATCQ’s (Tribe Degrees of Separation: check). Whether or not this conspiracy theory is true, Shade Business was a commercial failure, and I don’t know three people who own the album or spoke positive about it.

But here at TimeIsIllmatic we don’t care about commercial success. I found a used copy of the cd a few years ago and have never listened to it before now (I’m only familiar with the lead single from the album). Let’s walk through it and see if it deserves more respect than it’s received through the years.

Shade Business – The album opens with the title track and finds PMD rhyming about the shade business that goes on in the music industry as well as in the streets. PMD sounds serious and disgruntle, which fits nice with his rough backdrop built around a stripped down guitar loop. Decent way to start the evening.

In The Zone – P’s instrumental sounded empty and flat the first time I listened to this song. After a few more spins it begins to sound less empty and more cold and callous (almost like a skeleton version of EPMD’s instrumental for “Chill”, which PMD uses a vocal sample from on this song’s hook), and I like it. PMD’s monotone poker faced flow sounds pretty nice on top of it as well.

Steppin’ Thru Hardcore – “Them niggas new that shit before it happened” is what you hear PMD yell as the song begins, which in my mind is a subliminal directed at the E-Double and whomever he allegedly sent to rob P. After our host gets that out of his system, he drops a pulsating bass line but places a flat drum beat underneath it, which takes away from the bass line’s intensity. This is unfortunate because P actually spits some pretty decent bars on this one.

Respect Mine – This one starts with a Muhammad Ali soundbite about respect, playing over a soulful loop from The Impressions, which left me curious and anticipating how PMD was going to attack this slow laid back instrumental. Then he completely switches things up to a beat with a few more bpm’s than the latter but just as laidback. The instrumental is not terrible (it kind of reminds me of EPMD’s “Let The Funk Flow” from the Strictly Business album) and I liked the Wu-Tang vocal snippet on the hook, but P’s flow almost completely collapses on this one.

Back To The Rap – PMD (with a co-production credit going to Charlie Marotta) lays a solid mid-tempo groove and his offbeat jerky flow compliments it, nicely. Not a great song, but it makes for decent filler material.

I’ll Wait – Zone 7 (which is the duo of Lavell Bass and Roland Harris) joins Parrish on this cipher joint as they share microphone duties over DJ Scratch’s rough backdrop. Lavell and Roland’s voices get engulfed by the music but PMD’s booming vocal shines through, as he raps like an emcee with a chip on his shoulder (“Produced too many rap hits for niggas to be checkin’ me, I’m wreckin’ see”…Niggaz trippin’, bitin’ my business formats and techniques like rabies, juggles these-what? Nuts, hard to fade see”). By the way, I love the organ loop Scratch mixes into his hard instrumental.

I Saw It Cummin’ – This was the lead single and the only song I’d ever heard from Shade Business. PMD (with a co-production credit going to DJ Scratch) builds the funk style backdrop around a few loops from the Ohio Players’ “Funky Worm” and creates a very West Coastish sounding instrumental. The title and hook (which uses clever vocal loops from Ice Cube (“I saw it comin’ that’s why I went solo”) and Snoop (“Went solo on that ass, but it’s still the same”)) would lead one to believe that this is another shot at the Green-eyed Bandit, but P’s sloppy verses are all over the place (the delivery of P’s line “you know I’m psycho…crazy like that man Nor…man…Bates” might be the worst in the history of hip-hop) and he never really focuses on the subject at hand. The instrumental sounds better today than I remembered back then, and maybe a different rapper could have brought out more of its dopeness. Which reminds me that Above The Law used the same loop on Uncle Sam’s Curse‘s underrated lead single “Black Superman”.

Swing Your Own Thing – P samples Vaughan Mason’s “Bounce, Rock, Skate, Roll” at wholesale, which is extremely lazy and disappointing coming from someone as established in the game as PMD. He uses the unimaginative backdrop to share a message of unity and encouragement and comes off sounding cheesy and hollow.

Fake Homeyz – 3rd Eye (formerly known as Jesse West) and Top Quality join PMD, as they dedicate this one to all the fake homies (aka Erick Sermon). I like P’s instrumental, and 3rd Eye and Top Quality actually sound decent rhyming over it. Or maybe it was just nice to hear someone other than PMD rapping.

Phuck It Up Scratch (Interlude) – Parrish dedicates this one to DJ Scratch, as he takes footage from a live show where he’s playing Scratches hype man and proclaims his loyal deejay as “the Jesus Christ of two turntables”. This was a kind gesture.

Back Up Or Get Smacked Up – Everything about this song was trash.

Thought I Lost My Spot – 45 King lays down a smooth laid back instrumental (P gets a co-production credit) for PMD to display more of his slow flow styling and he sounds composed rhyming over it (what the hell does “concentratin’ like Nancy Kerrigan” even mean?). That’s all I got, folks.

No Shorts And No Sleep – PMD invites the new regime of the Hit Squad to join him on the final song of the evening (3rd Eye, Top Quality and Zone 7), and Troo Kula and Jesse Williams provide the understated smooth instrumental for the team to spit on. None of the parties involved sound terrible (or great for that matter), but the instrumental lacks the intensity needed to create the foundation for a memorable posse joint.

After living with Shade Business that past few weeks, it’s clear that Parrish Smith is not the same caliber of emcee or producer without his Brentwood bredrin Erik Sermon. On “Back Up Or Get Smacked Up” PMD rhymes “I couldn’t come sloppy poppy”, but spends the majority of the album doing just that. He showed signs of his new found awkward-off beat-stuttering flow on Business Never Personal, but he takes it to new heights on Shade Business. For four consecutive albums, EPMD was able to string together a cohesive batch of funk grooves for the listener’s audible enjoyment, and while P does manage to muster up a few solid instrumentals, most of Shade Business‘ production is soulless and mediocre.

Jordan and Pippen. Kool Aid and sugar. Hamburger and fries. Fish and water. Erick Sermon and Parrish Smith. Some things are just meant to be together. And when separated they’re not as successful. Or…they perish (pun intended).