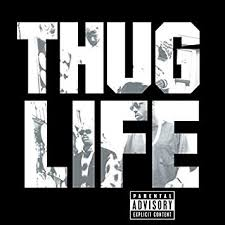 Thug Life was the collective of 2pac, Syke (rip), Macadoshis, Mopreme (Pac’s step brother) and The Rated R.  In other words, Thug Life was Pac’s attempt of putting his crew on and lining their pockets with some money. The group would sign a deal with Jive Records and released their one and only project, Volume 1, at the tail end of 1994.

Most of the production work on Volume 1 would be handled by the group, with a few contributions from some close associates of Thug Life. I don’t remember hearing a ton of praise from the streets or critics when Volume 1 was released, but regardless, the album would go on to earn the group a gold plaque, which can directly be contributed to 2pac’s involvement.

Even though I was a Pac fan from the jump, I never checked for Thug Life or Volume 1 back in ’94. I found a used copy sometime in the mid 2000’s and figured I’d buy it to complete my Pac collection, and because I was a fan of at least one of the songs on the album.

So even if Volume 1 is trash, I’ll enjoy at least one song and thug my way through the rest of it.

Bury Me A G – The first song of the evening starts out pretty shaky, as the first thing you hear are some janky sounding drums. Then the always trustworthy Isley Brothers “In Between The Sheets” loop comes in, along with Pac’s signature baritone, and makes everything better. We also quickly learn that the rest of the crew aren’t as talent as their thugged out leader when it comes to rhyming.

Don’t Get It Twisted – Jay and Mopreme get the production credit for this dark banger that Mopreme, Macadoshis and Rated R use to thug out on. None of three spit anything worth quoting, but the instrumental is a monster.

Shit Don’t Stop – From the content to the music (to the subpar vocal performance from Y.N.V. on the hook), this was trash. Next…

Pour Out A Little Liquor – This was the lead single and the main reason I bought Volume 1 in the first place. Pac goes solo on this one, as he reminisces and pays respect to his fallen friends: “Drinkin’ on gin, smokin’ on blunts and it’s on, reminisce about my niggas that’s dead and gone, and now their buried, sometimes my eyes still get blurry, cause I’m losin’ all my homies and I worry”. Johnny J build the melodic/melancholy backdrop around a soothing O’Jays’ loop that suits Pac’s rhymes, perfectly.

Stay True – Pac and Stretch (rip) get credit for this smooth back drop, built around an ill guitar loop and bass line. Stretch and Mopreme join Pac on the mic as they take turns pledging to stay true to the thug lifestyle. This would have been better as just a Pac and Stretch combo (who would have thought that two years later they’d both be gone), but not even Mopreme’s lackluster performance can keep this from being a dope record.

How Long Will They Mourn Me? – Warren G and Nate Dogg construct this mid-tempo backdrop, complete with mournful organ chords. Pac, Syke, Macadoshis and The Rated R use it to reminisce, pay respect and dedicate this song to their deceased partner, Kato. Nate Dogg not only gets a co-production credit, but also sings the head scratching hook, (Is he wishing death on somebody else? Man, that’s cold). This isn’t a terrible record, but it didn’t move me.

Under Pressure – Stretch returns and tag teams the mic with 2pac, as the two buddies thug their way all over this hard Thug Life produced track. 2pac gets the better of his guest, but together they both shine.

Street Fame – Stretch hooks up a monster of an instrumental for Mopreme, Syke and Rated R to spit on. Even though the trio are average emcees at best, they sound solid over Stetch’s hard backdrop.

Cradle To The Grave – Apparently this was the second single from Volume 1. Syke and Jay concoct a traditional West Coast instrumental with a touch of r&b flavor, and even invite vocalists Albert Washington and Rochell to sing the hook. For only the second time on Volume 1, all five members rhyme on the same track, as they each discuss their upbringing and share their personal plights. I can see why they chose this as a single. The production is easily digestible by the masses, but the fellas still stay true to their thug themed rhymes.

Str8 Ballin’ – Our hosts definitely saved the best for last. Easy Mo Bee lays down an infectious smooth groove, as Pac creeps solo, spilling vintage thug rhetoric, and he sounds great in the process: “I smoke blunts on a regular, fuck when it counts, I’m tryna make a million dollars out a quarter ounce, and gettin’ ghost on 5-0, fuck them hoes, gotta 45 screaming out survival…don’t wanna go to the pen I’m hittin’ fences, marks on a nigga back missing me by inches, and they say how you survive, weighin’ 165, in the city where the skinny niggas die? Tell mama don’t cry, even when they kill me, they could never take the game from a young g…I’m straight ballin!” I’ve never heard this song before this post, but now I’d put it in my top 15 Pac songs of all time.

Despite Thug Life’s overall lack of rhyming ability and lyrical talent, Volume 1 still ends up being an entertaining listen. Most of the entertainment value can be credited to 2pac on the mic and Thug Life and associates’ solid batch of instrumentals, which includes a few unheralded bangers as well. You’re not going to get much substance or a wide variety of content on Volume 1, but who listens to Thug Life for that?

Martin Luther King Jr. once said there is power in unity and power in numbers. On Volume 1, Thug Life proves that the sum is sometimes greater than its parts. And I never thought I’d be quoting MLK to wrap up a Thug Life album…does that count as blasphemy?