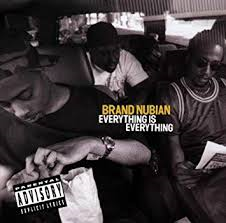 Like In God We Trust, Brand Nubian would keep the production in house (with the exception of one track) with Lord Jamar handling the music duties and Sadat X receiving co-production credit on most of the songs. Everything Is Everything received mixed reviews upon its release, from both the critics and the streets, and like all of Brand Nubian’s projects, it didn’t sell a ton of units.

Word Is Bond – This was the lead single from Everything Is Everything. Lord Jamar uses a funky Average White Band loop for the backdrop (I found it ironic that a super pro-black militant group such as Brand Nubian would sample a mainly white boy seventies soul group), which sounds a lot cleaner than the dusty loops we’ve grown accustom to hearing Brand Nubian spit over on their past projects. Most of that cleanliness can be credited to the live keyboard play (Dwayne Banks) underneath it. Jamar and Sadat pass the mic back and forth over the course of three verses, as they show and prove that they still got it; or as Sadat X simply puts it on the song’s final line: “Brand Nubian will stand, without the use of a band, we always work with a plan”. This was a nice way to kick off the show. Side note: Buckwild did a remix for this song, but his breezy instrumental wouldn’t hit as hard as the original.

Straight Off Da Head – So right after Sadat declares Brand Nubian doesn’t use a band, they pretty much recruit one to create the laidback airy musical atmosphere for this song (guitar, bass, drums and keyboard). Jamar and Sadat use the live instrumentation to spit authentic freestyles (as the song’s title suggest), turning this into a dope jam session.

Weed Vs. Weave (Interlude) – I like the Lou Donaldson loop used for the instrumental, but the rest of this interlude was useless.

Nubian Jam – Sticking with the smooth live instrumentation from “Straight Off Da Head”, our hosts invite more musicians to the studio to play live, as both emcees rock the mic lovely, and guest female vocalist, Laura Alfored blesses the track with her silky voice. Again, this song sounds a lot more polished then previous Brand Nubian material, but I enjoyed it.

Alladat – For his solo joint, Sadat X calls on Buckwild to produce the track and Busta Rhymes (who was just beginning his ridiculous run of cameos) to wild out on the hook, as he calls out those who think their shit don’t stink. Unfortunately, Buckwild’s instrumental is dry, Sadat’s rhymes don’t standout and Busta Rhymes’ antics on the hook are annoying as hell.

Step Into Da Cipher – Jamar and Sadat invite a few friends to join them on this cipher joint. Serge, Maestro Manny and Snagglepuss all spit verses along with our hosts, and while no one is embarrassingly bad (although Snagglepuss’ gimmicky delivery that imitates the speaking voice of the Hanna-Barbera cartoon character of the same name was kind of corny), no one really shines, either. Jamar’s instrumental is decent, but it doesn’t have the energy required for the foundation of a superior cipher joint.

Sweatin Bullets – Brand Nubian’s in a violent mood on this one, unloading clips into anyone that crosses their path. We’ve heard Brand Nubian get violent in the past, but the violence always seemed directed and purposeful (see “Punks Jump Up To Get Beat Down” and “Pass The Gat” from In God We Trust). This time they sound like they’re just on some ignorant gangsta shit.

Lookin At God (Interlude) – Over a Premo-ish sounding instrumental, Jamar lays a vocal snippet from a sermon by one of the Nation of Islam minister speaking about the importance of loving your brother. The interlude seems a bit misplaced sandwiched in between these two songs, but whatever.

Lick Dem Muthaphuckas (Remix) – Brand Nubian continues with the murderous rhetoric they started with on “Sweatin Bullets”. The original version of this song appeared on the Menace II Society Soundtrack. For the remix, our hosts each add an additional verse and Lord Jamar gives it a darker instrumental, which suits the duo’s content, well.

Claimin I’m A Criminal – Jamar loops up a nasty Luther Ingram sample for the backbone of this instrumental and invites some musicians to the studio to fill in the empty spots and give it a cleaner feel, as he and Sadat each spit a verse from the perspective of a prison inmate. Jamar’s verse is solid, but Sadat steals the show, spitting one of the strongest verses in his catalog as he paints a vivid and soul touching picture: “I love my kids and I’ll teach them to love their father, I’ll send some kicks and try to send some flicks, but it’s over, baby yes it’s over…aint much you can do when you’re holding a phone, a million inmates, but you’re still alone, you’re not crying, but inside you’re dying…you might cry in the night, when you’re safe and out of sight, damn, I miss my peeps and the rides in the jeeps, and my casual freedom, where’s my crew when I need ’em? A visit aint the same, like being in the game, but I’ll take it, at least with that I’ll make it, the beast is a bitch and I see it.” Unheralded classic.

Gang Bang – Brand Nubian uses this one to call law enforcement the biggest gang in America (Preach, brothers!). It’s a decent song, but it feels like filler material.

Down For The Real – The live instrumentation on this one sounds very similar to the music on “Straight Off The Head”. Our hosts use it to continue the murder spree they started on “Sweatin Bullets” and “Lick Dem Muthafuckas (Remix)”. It’s not a standout track, but it makes for decent enough filler material.

What The Fuck… – Jamar and Sadat are ready to start the revolution on this one. Unfortunately, they used the wrong backing music to spark it.

Hold On – For the final song of the evening, Jamar samples Simply Red’s classic “Holding Back The Years” for the backdrop and invites his friend, STARR to sing the hook. Jamar uses the serene instrumental to address black on black crime, while Sadat spits a verse about a night out on the town that has the potential to quickly get out of hand. This was the second single and one of my favorite songs on Everything Is Everything.

Everything Is Everything is not as strong of an album as I remember it being. Thanks to a sizable dosage of live instrumentation, the album has a smoother and cleaner feel than Brand Nubians’ two previous releases. Some die hard Nubian fans might not appreciate it, but I actually enjoyed the crisper production more than the tracks that stick with the traditional dusty Brand Nubian sound. More troublesome than the uneven production is Lord Jamar and Sadat X’s lack of substance, repetitive subject matter and contradictions. Both emcees have their moments of shining on Everything Is Everything (with Sadat shinning brighter and more often than his dreaded bredrin), but those moments are overshadowed by songs that promote black on black violence mixed in amongst messages of “loving and respecting your brother” and calling out law enforcement and white me for the same violence they emote throughout the album.

Everything Is Everything is not a terrible album, but sometimes nostalgia can be a bit deceptive.

7 Responses to Brand Nubian – Everything Is Everything (Novemeber 1, 1994)