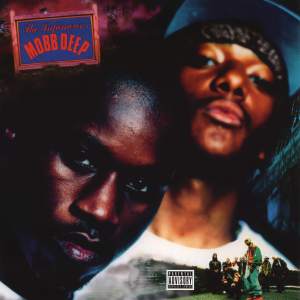 Most casual fans don’t know that before Mobb Deep released The Infamous album in ’95 they released their debut album Juvenile Hell on 4th & Broadway Records back in 1993.  The lead single “Peer Pressure” produced by Premo, was dope, but the rest of the album left a lot to be desired ( I bought it on cd back in the day, but I have no idea what happened to it). After Juvenile Hell flopped, Havoc and Prodigy (RIP) would sever their ties with 4th & Broadway and sign with Loud Records, where they would release their next four albums, including the subject of today’s post, The Infamous. Thank God for second chances.

The liner notes for The Infamous credit Mobb Deep for most of the production work (but everybody knows Havoc is the real mastermind behind the Mobb’s music), with Q-Tip receiving production credit for three of the album’s tracks (Tribe Degrees of Separation: check). The Infamous was a commercial success (earning Mobb Deep their first gold plaque, two months after its release) and is universally heralded as Mobb Deep’s best album and one of the greatest hip-hop albums of all-time.

This April marked The Infamous‘ 25th birthday. Let’s celebrate by revisiting this landmark album and see how it’s held up over the years.

The Start Of Your Ending (41st Side) – Havoc starts the album off with poppin’ drums placed underneath an evil piano loop that he and Prodigy use to set the mood for the evening, spittin’ their crime and violent hood rhymes.

The Infamous Prelude – Prodigy uses this 2 minute interlude to talk shit and take subliminals at random niggas and rappers (*cough* Keith Murray). After all these years I still lol when I hear P dis rappers that talk “that crazy space shit that don’t even make no sense” ” and then threatens to “start punchin’ niggas in they face just for livin'”. Classic interlude.

Survival Of The Fittest – This was the second single from The Infamous. P and Havoc pick up where they left off at on “The Start Of Your Ending”, smacking you in the face with more tough talk and hood politicin’. Havoc’s mean instrumental sounds just as convincing and entertaining as the duo’s rhymes.

Eye For An Eye (Your Beef Is Mines) – Mobb Deep invites Raekwon and, arguably one of the top ten to ever spit on a mic, Nas to join them on this cipher joint as they pledge allegiance to their crews, or as the hooks says: “As time goes by, an eye for eye, we in this together son, your beef is mines, so long as the sun shines to light up the sky, we in this together son your beef is mines”. Of course this was made a few years before Nas and Prodigy would begin their beef (good thing they didn’t say word is bond during the hook). I remember being super disappointed by Nas’ verse and Havoc’s sleepy instrumental back in the day. Nas’ verse is still underwhelming, but Havoc’s instrumental sounds better than I remembered it (it reminds me of Gza’s “I Gotcha Back”, which ironically, I like). Regardless, it’s still one of my least favorite songs on the album.

Just Step Prelude – Mobb Deep affiliate, Big Noyd makes his first appearance of the evening, as he joins Prodigy to spit acapella rhymes on this prelude to the next song…

Give Up The Goods (Just Step) – Q-Tip (credited in the liner notes by his other alias “The Abstract”) gets his first production credit of the evening, as he builds this one around poppin’ drums and an ill Esther Phillips’ loop. Big Noyd joins Mobb Deep on the mic and actually out rhymes both of his hosts, who also turn in dope verses. This is easily one of my favorite songs on The Infamous.

Temperature’s Rising – Speaking of my favorites, this one goes in the same category as “Give Up The Goods”. Q-Tip comes right back with another brilliant instrumental (Mobb Deep gets a co-production credit) for Havoc and P to share stories about a couple of their comrades who had to take flight after the kitchen got to hot, hence the song title: “What up, Black? Hold your head wherever you’re at, on the flow from the cops with wings on your back, that snitch nigga – gave police your location, we’ll chop his body up in six degrees of separation, Killer listen, shit aint the same without you at home, phony niggas walk around tryna be your clone”. Phenomenal instrumental, great rhymes, and Crystal Johnson’s vocals on the hook and adlibs is the cherry on top of this hip-hop treat.

Up North Trip – The song starts out with Prodigy spitting a verse about life locked up behind bars, which is also what the title and hook suggest. But on the second verse, Havoc quickly deviates from that theme and gets right back to shootin’ random dudes, gettin’ high and bangin’ chicks. P adds a third verse where he lets his gangsta persona down for a few bars and you get a rare glimpse of the vulnerable side of Albert Johnson: “Then I pause…and ask God why, did he put me on this earth just so I could die? I sit back and build on all the things I did wrong, why I’m still breathin’ and all my friends gone, I try not to dwell on the subject for a while, cause I might get stuck in this corrupt lifestyle, but my heart pumps foul blood through my arteries, and I can’t turn it back it’s a part of me”. Havoc’s melodic hardcore backdrop sounds just as entertaining as the duo’s rhymes.

Trife Life – The song opens with the audio equivalent of manna falling from heaven and Mobb Deep sharing a few words over it. Then Havoc drops his hollow drums accompanied by airy vibes and a thick bass line that he and Prodigy use to share tales from the hood. These dudes are in a zone.

Q.U. – Hectic – Havoc and P use this one to spew more thugged out bars. Hav goes a bit too far when he gets his Nino Brown on and brags about using little babies as shields on the second verse, but his dark unsettling chords coupled with the anxious jazzy horn loop makes for a brilliant instrumental.

Right Back At You – Havoc (with a co-production credit going to Schott Free) creates his rawest and darkest instrumental of the evening, as he and P spit their most menacing bars of the night: “Now run for your life, or you wanna get your heat, whatever, we can die together, as long as I send your maggot ass to the essence, I don’t give a fuck about my presence, I’m lost in the blocks of hate and can’t wait, for the next crab nigga to step and meet fate”. They also invite Raekwon, Ghostface Killah and Big Noyd to spit verses, and Noyd nearly steals the show from Prodigy with his strong song closing verse. This sinisterly dark masterpiece is another one of my favorites.

The Grave Prelude – Short prelude that sets up the next song…

Cradle To The Grave – Havoc lays a jazzy/bluesy backdrop that he and Prodigy use to discuss life, death and all the drama that comes in between the two when you’re caught up in the street life. I like the somberness of the instrumental and Prodigy’s reflection on the song’s final verse.

Drink Away The Pain – Q-Tip get his third and final production credit of the evening, sliding the duo some ole slick jazzy shit that they use to compare their alcoholic behavior to romantic relationships. Tip also adds a verse, sandwiched in between Hav’s and P’s, which kind of works as a PSA about the consequences of crime (he cleverly uses popular designer clothing brands to drive his point home). This one sounds way better than I remember it back in ’95.

Shook Ones Pt. II – This was the lead single from The Infamous and I can confidently say, the biggest and most influential record in Mobb Deep’s catalog. I still remember the first time I heard this record on the local late night hip-hop radio show back in the day (KMOJ, stand up!!). Havoc’s lurking bass line mixed with the angelic chords in the loop, matched with Havoc and Prodigy’s vividly frigid bars, left me mesmerized. 25 years later and it still has the same effect on me. This is easily one of the ten greatest hip-hop songs of all-time. Side note: Pt 1, which is easily accessible on the web or your favorite streaming platform, ain’t got nothin’ on Pt II.

Party Over – I completely forgot this song existed. Big Noyd (who Mobb Deep should have just made the official third member) joins Havoc and P again, as they all spit more of their hood rhetoric. For the first time on The Infamous, Mobb Deep’s crimology rings hollow and uninteresting. So does the instrumental.

Through the years, hip-hop has given us a fair share of thug rappers spewing hood soliloquies. Most of them have a few decent songs, but all the repetitive criminal content for the length of an album becomes a challenge to sit and listen to. Prodigy and Havoc don’t stray away from criminal content on The Infamous, but unlike their contemporaries, they defy the odds and miraculously are able to keep the thug themes interesting for 16 tracks (well, 15, but that’s still impressive!). When you couple the duo’s entertainingly brash lyricism with the brilliant batch of instrumentals on The Infamous, you get a hip-hop masterpiece. I’ve always held The Infamous in high regards, but after listening to it again these past few weeks, it may have moved into my top 10 albums of all time. Your thoughts?