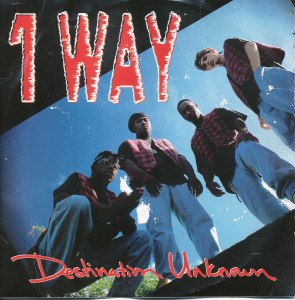 I have a feeling this release date is wrong (I think it may have originally came out in ’94), but whatever. I’m rolling with it.

Proverb, 2-Edge, Sweet-P and D-Love make up the four man crew known as 1 Way. The Tampa, Florida based foursome’s name is a direct reference to their overall message and purpose: Jesus is the only way (or the one way) to eternal life. I became hip to One Way back in ’99/’00 during my well-documented soul searching period (which also happens to be the name of a great Average White Band record and album), when I discovered their sophomore effort, SoulJourn. I thought it was a solid album, so several years later when I found their debut album Destination Unknown in the used cd dollar bins at Pawn America, I scooped it like Ice cream (peace to Big Daddy Kane).

Destination Unknown was released on a small independent label called Intersounds and distributed by Benson Music Group to Christian Book Stores around the globe. AJ Weir, DJ Mike Fury and the lead emcee of 1 Way, Proverb (which is a dope emcee alias) would handle all the production on the album. I bought Destination Unknown at least 10 years ago, but haven’t listened to it until now.

I pray (no pun intended) that Destination Unknown’s corny cover artwork isn’t an early indication to how bad the album is.

Intro – The album opens with a voice that is supposed to be that of Jesus, saying what he said to his disciples in John 14:6 (“I am the way and the truth and the life. No one comes to the Father, except through me”). I know 1 Way was just trying to explain the concept of the group’s name and the album title, but the distortion in the voice playing Jesus, almost sounds demonic.

Colorblind – The first song of the evening finds Proverb denouncing white supremist groups (i.e. the Arian Nation and the KKK) and stressing the importance of racial harmony amongst all men. For some reason Proverb decided to scream his way through his rhymes, which grows annoying by the end of his first verse. I struggle with the term “colorblind” when used in the context of racism, as there is nothing wrong with recognizing someone’s skin color and background. Along with gender and age, it’s one of the first things you subconsciously notice about a person when you meet them. The problem is not noticing or recognizing color or race, but mistreating people because of it. And on that note, let me get off my soapbox. Oh yeah…the song. I appreciate the sentiment, but I wasn’t feeling this one.

Work It (The Right Way) – I’m pretty sure this song was recorded around ’94. But Mike Fury’s instrumental and 2-Edge’s rhymes sound like it was made in the mid-eighties. And that’s not a compliment.

No Sellout (Jazz Mix) – AJ Weir hooks up a funky little bop for Proverb to flex over, as he proclaims his allegiance to Jesus Christ, whom he’ll never sellout. Prov has a few shaky moments on the mic (like when he says “If I was a tap dancer I’d be the Sandman”), but all in all, he turns in a serviceable performance, and the song ends up being decent.

Tales From Da Darkside – The darkside (or “darksyde”, depending on where you read the song title on the liner notes) that Proverb and D-Love are talking about is the hood. The two share hood stories that all end negatively, except for Proverb’s testimony: he shares that his focus on academics helped him escape the traps laid before him in the Tampa streets. Proverb’s haunting backdrop matches he and D-Love’s content, well.

Destination Unknown – On this title track Proverb and 2-Edge are asking the listener to consider where they’ll go after death: Either eternal life in heaven with Jesus and ’em or eternal damnation burning in a lake of fire with Lucifer and his imps. It must have been to expensive for the label to clear the sample of Barry White’s classic “I’m Gonna Love You Just A Little More Baby” record, as Mike Fury taps John Semsic to replay portions of it for the instrumental. It still sounds decent, just as Alfreda Gerald’s vocals on the hook and adlibs do. But Prov and 2-Edge spit unimpressive rhymes and fail to drive their message home.

Posers – Proverb calls out studio Christians (aka posers) over a low quality Mike Fury produced backdrop. This was really bad.

It’s Alright Ta Get Hype – Mike Fury’s instrumental sounds like a poor man’s version of the backdrop for Big Daddy Kane’s “Nuff Respect Due”. Proverb uses the up-tempo beat to spit his strongest bars of the evening up to this point.

Turn It Up – Proverb and Sweet P spit g-rated rhymes as they encourage the listen to “turn up the funky, funky sound”. Speaking of funky, Proverb combines a funky guitar loop (that reminds me a lot of Brand New Heavies’ “Dream Come True”) with a dope horn sample placed over busy drums, which makes for a pretty enjoyable instrumental.

Step 2 Tha Positive – 1 Way uses this one to motivate the listener to choose positive over negative, if the choice is presented. The rhymes are decent, but the ill Middle Eastern flavored flute loop the instrumental is built around is the real star of this song. This is easily the strongest song on Destination Unknown.

Viktim Of Tha Sindrome – Get it: sin-drome? This is pretty much 2-Edge’s version of “Tales From Da Darkside”. Proverb’s instrumental is decent, but 2-Edge sounds horrible on the mic.

Mic Check -This may be the most pointless interlude in the history of hip-hop albums.

No Sellout (Ruffnek Mix) – Ironically, 1 Way calls this remix the “Ruffnek Mix”, even though it sounds just as jazzy as the “Jazz Mix”. The instrumental is cool, but whoever they have re-rapping Proverb’s rhymes from the first mix, sounds annoying as hell with his whiny vocal tone.

Smile 4 Awhile – Once again, Mike Fury’s instrumental and 1 Way’s bars sound like they jumped in the DeLorean and went back to 1982. And with that, Final Destination, I mean, Destination Unknown is complete.

On Destination Unknown, 1 Way sounds like four individuals whose love for Jesus and hip-hop brought them together to form a group and make an album. The only problem is they were so rough around the edges at this point that they make sandpaper look smooth. Destination Unknown has a few bright spots on the production side, but even those limited moments aren’t great. Most of the rhymes and instrumentals sound antiquated by mid-nineties standards, making this fourteen track length album tough to listen to from beginning to end. I have a soft spot in my heart for gospel rap, but this is an early candidate for worst album of the year. Thank God for second chances.