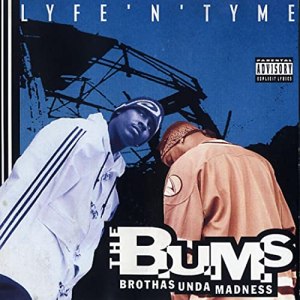 Through the years, like all genres, hip-hop has seen its fair share of one and done’s: groups that came on the scene, released one album and disappeared into the darkest deepest blackest hole never to be heard from again. There are various reasons for these disappearing acts: death, bad contracts, terrible debut albums, quality projects with disappointing commercial results, or the artist simply gets tired of dealing with the industry politics and walks away from the game forever. Today, we add The BUMs to this tragic list.

The BUMs, which is an acronym for Brothas Under Madness, were the Oakland, California based duo, Evocalist and D. Wyze. They were also a part of Sway & King Tech’s All City crew, who played a large part in The BUMs getting their foot in the door. The BUMs would get their first National exposure with a song included on the gold selling Street Fighter Soundtrack (an album that I own but completely forgot The BUMs had a song on it) and nearly six months later they would release their debut album Lyfe ‘N’ Tyme on Priority Records.

The BUMs would bring on the unestablished Joe Quixx to produce the bulk of Lyfe ‘N’ Tyme, with Sway and King Tech getting executive producer credits along with themselves (hopefully, Sway will get inducted into the Radio Hall of Fame this week, as he’s more than deserving). The album produced one single that made minimal noise and needless to say, it was a commercial disappointment.

I remember loving Lyfe ‘N’ Tyme back in ’95, but it’s been several years since I’ve listened to it. Let’s see how it’s held up over the years.

Non-Stoppin’ The Groove – Joe Quixx (whom I’ll refer to simply as JQ from here on) concocts a laidback jazzy backdrop with a sick mumbling bass line that Evocalist and D. Wyze use to showcase their solid rhyming skills over. Evocalist, who’s vocal tone and flow remind me a little of AZ, received The Source’s Hip-Hop Quotable column for his verse on this one. From the jump it’s clear that E’s the stronger emcee of the two.

I Don’t Know – A short interlude (or as the liner notes call it, “insert”) that must be an inside joke amongst the BUM’s crew.

Wreck Your Ears (Can Do) – JQ picks up the pace a bit from the previous song with this soulful groove. D. Wyze turns in a decent performance, but Evocalist wrecks your ears, the mic and the shit out of the instrumental: “Now, I gets busy underground like gooks during Vietnam, no selling out because my mom didn’t raise a Tom, Evol’s my name, I flex mad styles, I’m known for gettin’ nastier than maggots on a dead cow, at many clouds rockin’ crowds from here to China, I gets looser than the lips on a prostitute’s vagina, so sleep on my skills, and sleep in grills they use for traction, cause I put my thaaaang in action, awakening crews in a rude fashion, on they ass like Mike Tyson at a beauty pageant”. This was really dope.

Take A Look Around – Fredwreck Nassar builds on the jazzy mood that JQ’s created on Lyfe ‘N’ Tyme thus far, as he slides The BUMs another great soundscape that the duo use to share about their upbringing and other random personal shit. Props to Evocalist, as he may be the only rapper to ever use “phalanges” in a rhyme (though I’m sure if I comb through every one of Canibus’ rhymes, I’ll find the word there too). With the exception of the nonsensical hook, everything about this song was dope.

6 Figures And Up – JQ keeps the good times coming, as he provides another funky groove that makes me want to get my pimp stroll on every time I hear it. E and D use it to discuss the amount of income they deem necessary to sustain their lifestyles, or as Evocalist simply puts it: “Not two, not three, not four, not five, six figures and up is what I need to survive”. This is a great record that can also be used to help motivate you to achieve financial success.

Flex Uv A Finga – The BUMs use this one to discuss the drama and violence that goes down in the Oakland streets. The content is decent, but JQ’s instrumental is a little dry.

Diggin’ In The Crate – This interlude uses a snippet from Sway & Tech’s The Wake Up Show where they premiered one of The BUM’s songs. This bleeds directly into the next song…

Let The Music Take Your Mind – JQ builds this serene and soulful backdrop around an ill Blackbyrds loop that our hosts use to talk random shit and in passing, try to convince the listener to do what the title suggest. JQ’s instrumental is brilliant, and must be a slice of what heaven feels like.

Suck My Dick – This interlude starts with a smooth Jaggerz loop that is quickly interrupted by someone lighting a blunt and dedicating the rest of the interlude to “all you bullshit ass A&Rs and you fucked up labels”. Then a stripped-down drum beat and a twisted bass line come in, accompanied by an ill Fat Joe vocal snippet, instructing those A&Rs and labels to do exactly what the title suggest. This was pretty cute.

Elevation (Free My Mind) – This was the lead single (and I believe the only single) from Lyfe ‘N’ Tyme. JQ loops up Teddy Pendergrass’ classic “Close The Door” as our hosts discuss music industry politics. This is a brilliant record that sounds even better now than when it was first released.

West Coast Smack – Evocalist and D. Wyze represent for the West Coast on this one, with E laying down the stronger back hand than his partner in rhyme. I wasn’t crazy about the Baka Boyz zany instrumental, but the Souls Of Mischief and D-Nice vocal loops were pretty dope, even if D-Nice’s “boom, boom, bap, boom, bam!” is more of knock out combination than a smack.

Harry Joenick – Yet another inside joke interlude.

Lyfe ‘N’ Tyme – For the title track our hosts are joined by their Oakland neighbor, Mystic (even though the liner notes credit her on the next song for her verse on this one), as each party spits a conscious verse over a beautiful JQ backdrop. Evocalist spits what may be his masterwork, dropping precious gems and jewels throughout: “Fakin’ the style, is a flagrant foul, lets chill for a while, but in the end it comes back someday someway somehow, playin’ both sides like a double edge knife, will get you squashed like a bug on the windshield of life, this goes out to all the 70’s kids, who didn’t die from SIDS, only to spend a lifetime doing bids”. This is definitely one of my favorite songs on the album.

For My Brothas – JQ hooks up some ole cool shit with a bass line so thick it would make Serena Williams blush. The BUMs deliver solid verses, but JQ’s dope backdrop is the true star of this one.

Can You Do Without? – King Tech gets his only production credit of the evening (excluding his executive producer credit for the album) with this one, as he slides the BUMs an animated backdrop with a jazzy swing twist. The full question being posed is: If there was no hip-hop could you do without? I mean, I guess I’d have to. But I could definitely do without this song.

Who Gives You The Right – The final track of the evening features Evocalist sharing a spoken word poem that asks his oppressors (even though the question mark is omitted in the song title) who gives them the right to oppress. E’s heartfelt words sound great over the soul stirring instrumentation. And that concludes Lyfe ‘N’ Tyme.

On Lyfe ‘N’ Tyme The BUMs consistently represent for Oakland, show Sway and Tech respect for putting them on, and D.Wyze makes sure the listening audience is fully aware that he’s also a barber. More importantly, D. Wyze and his more polished rhyming partner, Evocalist spit solid bars and balance substance with good old fashion braggadocio shit talking. Joe Quixx is just important to Lyfe ‘N’ Tyme as Evocalist and D. Wyze, as his superb batch of mid-tempo instrumentals built around well-executed jazz and soul loops is the heart and soul of the album. Matter of fact, the only mediocre moments on the album occur (with the exception of “Flex Uv A Finga”) when JQ’s not on the boards (I’m scratching my head to why he didn’t get more work after this project). Lyfe ‘N’ Time is a great debut album from a group that I would have loved to hear more music from.

I wonder why they vanished so quickly from the game. It’s not like they didn’t have the talent. Maybe Evocalist was waxing prophetic on “Elevation (Free My Mind)” when he said: “Since I don’t brainwash minds, with talkin’ nines, and how I shoot ya, it seems no multi-million contract is in my future”.