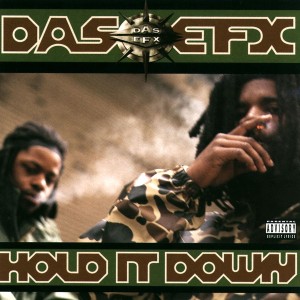 It’s wild to think that by 1995 Das EFX already had two albums under their belt. After hitting the scene hard in ’92 with their platinum selling debut album, Dead Serious where their unique “iggity” style made quite the impact and produced several copycats, they returned in 1993 with its follow-up, Straight Up Sewaside. Due to heavy criticism from those who felt the “iggity” style was gimmicky and too animated, Das would abandon it on Sewaside and use a more straight forward approach that ultimately resulted in a lackluster album. The duo would return in ’95 with their third release, Hold It Down.

On their first two albums, Das rendered most of the production responsibilities to the production duo, Solid Scheme. While Solid Scheme would produce a few records on Hold It Down, Das would also call on some all-star producers to help carry the load: Premier, Pete Rock, Easy Mo Bee, DJ Clark Kent and Showbiz. Even with the A-lister production help, Hold It Down was a commercial failure and received mediocre reviews. It would also be Das’ last album on the EastWest label.

For some reason I didn’t buy Hold It Down back in the day, and only recognize one of the songs on the track list. I found a used copy a few years back and still haven’t listened to. Until now. Hopefully I won’t agree with the critics’ reviews on this one.

Intro (Once Again) – After nearly thirty seconds of basically silence (I’m assuming it’s supposed to be Das EFX walking and entering the studio in the background), Das kicks things off with heavy drums and a thick bass line that they use to yell a high energy chant for approximately thirty seconds.

No Diggedy – The song title’s not only the hook, but a double entendre for the ebonical way of saying “no doubt” and a tongue and cheek poke at themselves for abandoning their stuttering style on the previous album. They do bring the style back for this one, as they mix small slabs of it into their shit talk over some decent Premo boom bap.

Knockin’ Niggaz Off – Easy Mo Bee gets his first production credit of the evening, sliding the duo some hard shit that they spit quality battle rhymes on. Add the catchy hook built around a dope Rakim bar and this ends up being a solid joint.

Here We Go – Das continues to talk their shit and spew battle raps over a dope Solid Scheme backdrop, complete with triumphant horns.

Real Hip-Hop (Original Version) – This was the lead single and the only song I was familiar with going into this review. Premo gets his second and final production credit of the evening, laying down an ill slow-rolling bop with a dense bass line that our hosts use to represent the real hip-hop over.

Here It Is – Kevin Geeda hooks up a sinisterly dark instrumental for Skoob and Dray, who continue to spew quality rhymes. As great as Das sounds, they are out done by Geeda’s exceptional instrumental.

Microphone Master – Apparently this was the second single from Hold It Down. Mo Bee cooks up a slick soundscape that sounds like something Premo might have done. Dray and Skoob proceed to bless it with their “sewer style”, completing the second part of a potent one-two combination punch.

40 & A Blunt – I bet you can figure out what this one is about. Mo Bee drops off some laidback cool shit that Das uses to celebrate getting drunk and smoking weed over. I chuckle every time I hear Skoob randomly say “I buys ten bags for dolo, sick of niggas askin’ “Yo, what up with K-Solo?””. This was a cool record that I would get high to if I smoked.

Buck -Buck – Over a simple but hard drum beat, Krazy and Skoob play hot potato with the mic without any breaks or hooks. They stop spittin’ just over the three minute mark, but it sounds like they could have gone on a lot longer if they wanted to.

Intro – Das starts the second half of Hold It Down with another intro. This one takes a super short snippet of the duo at a live show that goes right into the next song…

Can’t Have Nuttin’ – Gerald “Soul G” Stevens lives up to his alias, as he provides Das with a soulful backdrop that takes the listener to church, while Skoob and Dray testify, sharing their humble upbringings, how they met and ultimately got into the game. It’s rare to hear Das in storytelling mode, but they do a serviceable job and it was a nice change of pace from the rest of the content they’ve given us on Hold It Down to this point.

Alright – Das delivers more quality bars over an intense soulful banger, courtesy of Mo Bee. On the song’s last first Skoob calls out all the rappers who bit their style over the previous three years: “Some heard the style and did construction on it, but they just touchin’ on it, bitch ass niggas aint got nuttin’ for it”. This was dope.

Hold It Down – A title song should never sound this mediocre.

Dedicated – Here’s another one that I thought Premo did, but it’s actually credited to the legendary DJ Clark Kent. Das dedicates the hook to high niggas, fly bitches and niggas and chicks that run game, but the verses stick to the boastful shit talkin’ they’ve pretty much spewed the entire album. Even though this came out a year and a half before his untimely demise, it still made me pause when I heard Dray say “I saw ya, tried to steal my style, hit the balls, I guess ya must be ready to die like Biggie Smalls”.

Ready To Rock Rough Rhymes – Das takes a back seat and lets their long time production partners, Derek Lynch (aka DL) and Chris Charity (aka C-Dog), together known as Solid Scheme, shine, as they not only produce the potent and rough instrumental, but spit on it as well. Besides C-Dog saying “badder” (and not the stuff you make pancakes with), they actually sound decent on the mic (Chris has a dope rapping voice). Krazy and Skoob do show up at the tail end of the song, just to remind their producers who the real emcees are. This was dope.

Represent The Real – To confirm that their beef with KRS-One was truly squashed, the duo invite The Teacher to join them on this one (for a quick recap on their beef, click here, then scroll down and read my thoughts on “We In There”). KRS would also include this on his self-titled album that would be released a few weeks after Hold It Down. From Showbiz’ instrumental to all three emcees’ rhymes, this was very ho-hum.

Comin’ Thru – Das handles DJ Scratch’s decent backdrop well, but I wasn’t crazy about this one.

Hardcore Rap Act – Our hosts breeze over Solid Scheme’s airy and very serious instrumental, but Skoob, specifically, demolishes this shit: “You never catch me rappin’ about some shit like the government, but I be snappin’ on emcees like your bitch snap on Doublemint, got a shotty and a burner and I keeps the two ready, to hit you in your chest like Steve Young do Jerry, Rice, been nice, since doc sliced, my umbilocal, knew that I would be the ill funk freaker of the syllables, and son is rugged you’re gonna love it in an instant, see I smoke blunts, but yo my Pops smoked Winstons”. This was a tough record.

Bad News – Scratch hooks up a very hard EPMD-esque backdrop, as Das is joined by PMD for this short little diddly.

Real Hip-Hop (Pete Rock Remix) – This was a bonus record, only included on the cd version of Hold It Down. As the title suggest, Pete Rock is responsible for the instrumental for this remix to the album’s lead single. Pete hooks up a mid-tempo high energy backdrop with some muscle that actually helps Dray and Skoob’s rhymes stand out more than the original mix.

Das EFX makes one thing very clear on Hold It Down: that they’re some “rappin’ ass negroes”. Their talent may have gotten lost in the animation of the first album and overlooked on their underwhelming follow-up, but Hold It Down finds the locked lyricists in full stride, mixing potent punchlines and metaphors with the perfect measurement of “iggity”, as they pretty much destroy every beat thrown at them. Speaking of beats, pound for pound, Hold It Down has the best batch of instrumentals of Das’ first three albums. Their battle/braggadocio freestyles become a little redundant by the midway point and they could have shaved three of four songs off the final product, but overall, they create an entertaining album that lives up to its title.