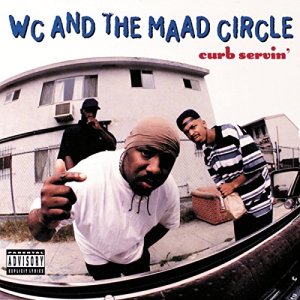 After a short stent with DJ Aladdin as the duo Low Profile (you can read my thoughts on their sole group album here), WC left his partner in rhyme and teamed up with his little brother, Crazy Toones (rip), Coolio and Big Gee, forming the new group: WC and the Maad Circle. The group was able to secure a deal with Priority where they would release their debut album, Ain’t A Damn Thang Changed in 1991. While the album wasn’t a commercial success, it did receive love and respect from the streets, and I personally enjoyed the album as well (I had a copy of the cassette back in the day, but it got ate by my boom box several years and moons ago. Since then, it’s long been on my collection want list, but I’m not willing to shell out fifty bucks for a used CD copy. I’m sure I’ll come across a copy for a reasonable price one day, but until then…I’ll wait). After a four year hiatus, WC and the gang would return, without Coolio (who had gone solo and become a pop/rap star by that time) and on a new label (Payday/London), to release their sophomore effort, Curb Servin’.

Gone are Chilly Chill and Sir Jinx who helped mold the sound of AADTC. Curb Servin’ would rely mostly on the hands and ears of Crazy Toones to sonically shape the album, with a few assists from a couple of outside parties (including the legendary Ice Cube). Dub C would hold down microphone duties, while we’re still trying to figure out what Big Gee’s role is in the group. Curb Servin’ produced a couple of singles that made a little whisper and the album fared better than its predecessor on the charts, climbing to 85 on the Billboard’s Top 200 and 15 on the Top Hip-Hop/R&B Album Charts. Curb Servin’ would be the last album released under the Maad Circle name, as WC would once again leave a group to form a new one (he’s like the Lebron James of hip-hop), this time joining forces with Ice Cube and Mack 10 to form Westside Connection, who would release their debut group album the following year, and he would also begin his solo career.

I liked Ain’t A Damn Thang Changed, so when I bumped into a used CD copy of Curb Servin’ for less than ten bucks a few weeks ago, I had to cop. Curb Servin’ is yet another album that I’ve never heard in its entirety, until now, which is making me reconsider my earlier notion that I was super aware of all things hip-hop in the mid-nineties.

Intro – After a cinematic horn sample and a snippet from a police call that has a cop threatening to unleash the dogs on some poor soul, WC comes in and spits one sloppy and choppy verse over Crazy Toones’ uncreative instrumental built around a loop from the overly used and abused “Atomic Dog”. There are a few samples that should be retired and hung in the hip-hop rafters never to be used again, and “Atomic Dog” is one of them. Thankfully, this intro only lasts a minute and a half.

West Up! – This was the lead single from Curb Servin’. Crazy Toones loops up the same George Duke sample that Spice 1 used for “In My Neighborhood”, as Ice Cube and Mac 1o (who will forever be Wack 10 in my book after Common dissed him on “The Bitch In Yoo”) join Dub-C and give us the second installment of what would official become Westside Connection the following year (the first installment came on Mac 10’s self-titled debut album). While Dub C and Mac 10 spit lines to highlight the sights and sounds of L.A., Cube comes with a bunch of smoke for the East Coast, pretty much firing shots at them on every bar. This was dope. One of these days I’ll have to check out Westside Connection’s catalog.

Granny Nuttin’ Up – Granny leaves a hi-larious voicemail, misusing all the young boy slang in the process. This was a pretty funny interlude.

The One – This was the second single from Curb Servin’. Toones laces his big bro with some smooth soulful shit that Dub C uses to talk his shit on and occasionally goes into this corny Snagglepuss bit in the middle of a rhyme. I really like this one, and the greatness of Dub C summing the horn break after his second and third verses is only secondary to MC Eiht commanding the “bitches” to sing the hook on “Def Wish III”.

A Crazy Break Pt. 2 – Crazy Toones cuts shit up on the ones and two’s for this interlude, before going into the next song…

Put On Tha Set – WC smoked a PCP laced blunt (that he claims Coolio gave him) that has him so high he’s seeing himself on TV kickin’ it with the casts of classic shows like Martin, The Fresh Prince of Bel-Air and Good Times, and the pictures he paints are funny as hell (the mixture of Thelma’s ass and Volona’s titties on one woman sounded very appealing, until he mentioned she has Florida’s face). The production duo of Madness 4 Real and Dr. Jam get their first production credit of the evening, as they provide a smooth mid-tempo groove for WC’s zany, creative and entertaining tale.

In A Twist – Dub-C reunites with his former Maad Circle bredrin turned pop-star, Coolio on this one, as the duo use this duet to share the details of their heist plot. I wasn’t crazy about this one, but it was nice to hear WC and Coolio back together again.

Homesick – Our host expresses his love for the hood and declares that no matter where life takes him, he can’t and won’t stay away from the streets too long. Ice Cube hooks up a slow moving funk groove, dripping with pimp juice that’ll make you want to strut down the block with a toothpick in your mouth, looking for a prostitute to collect money from.

Curb Servin’ – The title track finds Dub C in battle mode, talkin’ his shit over a Crazy Toones/Ice Cube concoction, driven by samples from Tom Tom Club’s “Genius Of Love”. Remember what I said about “Atomic Dog” at the beginning of this post? The same applies for “Genius Of Love”. I didn’t like this one. WC sounds decent, but the backing music is very lackluster.

Stuckie Mack – Granny from the first interlude returns to leave another nonsensical vm. It was funny the first time around, but not enough to warrant a sequel.

Wet Dream – Over one long verse our host recalls the details of a dream he had while sleeping on the couch. In this dream, the black community comes together as one with one common goal in mind: to seek revenge on “every motherfucker who dissed the black” community. This includes Colin Powell, former California governor, Pete Wilson and Bill Clinton (whom Dub C is wise enough not to call out by name, but drops enough clues to make sure you know who he’s talking about) who all get sodomized (or as WC so eloquently puts it: “robbin’ motherfuckers of their manhood”) and hung high in Dub C’s brutal dream. Not quite as transformative and inspiring as MLK’s dream, but whatever. Gunfire from outside awakens our sleeping host, who’s quickly brought back to reality and finds himself sitting in a puddle of his own nut, which is both comical and disgusting. Toones provides a serious sounding smooth groove that helps bring the details of Dub’s dream to life.

Taking Ova – Madness 4 Real and Dr. Jam get their final production credit of the evening, sprinkling the perfect measurement of sinister synth chords over hard drums that Dub C rides like Billy The Kid on horseback (I love his line dedicated to the critics: “who said I wouldn’t last, I need to jump out the speakers and strangle yo’ ass”). Dub C’s baritone vocal sounds great over the minimal but potent backdrop.

Kill A Habit – Toones hooks up a semi-zany jazz flavored instrumental for Dub C, who’s on a mission to help his crack addicted brother get over his habit, and after several failed Rehabilitation Center stays (which he says are like vacations for his brother), Dub C’s ready to beat the habit out of his smoked-out sibling. After he and Toones beat the shit out of their brother and see no change in his behavior, it dawns on Dub that “the only one to kill a habit, is the one doing the practice”. Or he could take matters into his own hands and kill two birds with one stone (or one stoned bird) by putting a bullet in his head. This song reminds me a lot of Chris Rock’s stand-up comedy: serious shit discussed in a comical manner, making you laugh to keep from crying. Well done, WC.

Reality Check – A couple of Maad Circle’s locked up homeboys leave voicemails for Dub C and Crazy Toones, giving their current lock down location and showing love to the group on this short interlude. The concept and the instrumental sound very similar to Gang Starr’s “Aiiight Chill…” from Hard To Earn, which came out a year prior to Curb Servin’. Hmmm…

The Creator – A humble WC devotes the final song of the evening to God aka The Creator, showering him with reverence and praise for allowing him to survive the mean streets of Los Angeles and blessing him with the opportunity “to catch wreck over beats”, while a lot of his homeboys fell by the waste side. Dub C’s vocal tone and tendency to break into playful singing in the middle of a rhyme, reminds me a little of Big Daddy Kane. Rhythm D gets the production credit, hooking up a synthy interpolation of Shalamar’s “This Is For The Lover In You”, which works perfectly with Dub C’s heartfelt rhymes. The uncredited female vocalist on the hook and adlibs didn’t quite know her limitations and does a bit too much, but her unimpressive performance can’t derail this quality track. Great way to close out the album and the Maad Circle catalog.

Curb Servin’ is actually a pretty decent listen. After a forgettable intro, it quickly catches fire (“West Up!”, “The One” and “Put On Tha Set”), before going into a mediocre middle (“In A Twist”, “Homesick”, “Feel Me” and “Curb Servin'”), then finishes strong down the home stretch (“Wet Dream”, “Taking Ova”, “Kill A Habit” and “The Creator”). WC’s emcee presence and ability has definitely improved since his Low Profile days, and he does a quality job mastering the ceremony throughout Curb Servin’, balancing street shit with rapper shit talk and entertaining stories, even when the production wavers. I wouldn’t call Curb Servin’ a classic, but it’s definitely a worthy album from a short-lived but respected west coast crew.