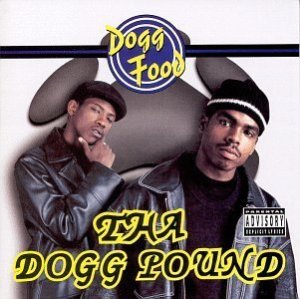 The Chronic and Doggystyle (and I’ll throw the Above The Rim Soundtrack in there too) laid a solid multi-platinum foundation for the legendary and notorious label, Death Row Records. Dr. Dre’s crispy clean G-Funk bangers paired with a bunch of young hungry emcees, led by Snoop Dogg’s infectious nasally flow and an industry bully in its CEO (Suge Knight), made Death Row a force to be reckoned with in the mid-nineties. Of course we all know about the drama that would soon come, causing Dre to leave, then Snoop, and the DR Empire quickly crumbled before our eyes…but that’s a story for another day. Next up to represent for Death Row would be Kurupt and Daz, together known as Tha Dogg Pound, with their debut album, Dogg Food.

Both Kurupt and Daz made cameos on The Chronic and Doggystyle, giving us a taste of their style, but Dogg Food would allow the duo to give the world a full dose of their sound. Daz would produce the majority of Dogg Food (with Dr. Dre mixing the whole album) for he and his Philly born, Cali-transplant partner, Kurupt to spit on with a little help from a few of their Death Row friends. Dogg Food would produce two buzz worthy singles, climb to number 1 on the Billboard Top 200, go double platinum, and earn DP a heapin’ helpin’ of critical acclaim.

I’ve heard the term “classic” tossed around with Dogg Food, but of course, like what feels like my last seven out of ten posts, I’ve never heard the album before today, so I wouldn’t be able to concur or disagree with that assessment. But for the next few weeks I vow to dig deep into the album and dissect every nook and cranny of Dogg Food hoping to share my truest thoughts and deepest feelings about this Death Row release from the long gone G-Funk era.

Yeah, that last sentence was a bit over the top. Let’s just jump into this review, please.

Intro – Quick intro that could have easily just been combined with the next track, but whatever.

Dogg Pound Gangstaz – Daz combines poppin’ drums with sinister synth chords, which makes for a bangin’ opening instrumental for him and Kurupt to spit over, and Kurupt wastes no time ripping this shit to shreds, and takes a direct shot at Eazy-E and his protégés, Bone Thugs-n-Harmony in the process. Daz adds a decent second verse, and this works out to be a solid opening statement from DPG. The song ends with Snoop adlibs, co-signing for his DPG bredrin, followed by a skit that features The Megatron Max DJ from the reoccurring fictitious radio station WBALLS, taking a few calls from some colorful callers.

Respect – We’ve heard several different variations of the “Atomic Dog” riff that Daz uses for this backdrop (with most of them coming from the mind and hands of Dr. Dre, who also happens to open this song with a short adlib), but his interpretation of it still sounds funky as hell. Kurupt continues to sound amazing and Daz tip toes with precision over his dope backdrop.

New York, New York – This was the lead single from Dogg Food. DJ Pooh gets the first of his two production credits, as he hooks up a slow rolling head-nodding bop (that’s very suitable for midnight marauding) that Kurupt completely annihilates. Of course this song would also be more gas on the fire in the feud between the two coasts, after the song’s video had Giant versions of DPG and Snoop kicking over buildings in New York (by the way, Kurupt claims the song originally wasn’t a dis to New York, but a homage, until they got shot at when making the video in New York that was allegedly ordered by Biggie. I don’t know what their original intention was with this song, but it sure does sound like Kurupt is mocking New York lingo, when he hi-lariously opens the song using terms like “Yo, Money” and “What’s up, God?”). This would go on to be the biggest hit in the duo’s catalog and a classic record that still sounds amazing today. Side note: This instrumental was originally used for Biggie’s St. Ides commercial that came out earlier in ’95.

Smooth – DJ EZ Dick from WBALLS (played by the late Ricky Harris) open this one with a few words (and closes it out with a few more and takes a couple of phone calls). Then DJ Pooh lays a basic, but still funky, instrumental for Snoop and Kurupt to rhyme over, as Daz sits this one out (I guess he doesn’t like rhyming over Pooh’s production). Snoop mails in his verse, while Kurupt continues to impress and should be arrested for assault and battery for how he brutalizes the mic and beat on this one.

Cyco-Lic-No – I absolutely love the vibes and cool energy that Daz’s slick instrumental gives off, as he and Kurupt’s synergy continues to entertain. Mr. Malik (formerly one-half of the juvenile duo, Illegal) makes a guest appearance and spits a pretty decent verse to wrap up the song (his flow definitely sounds more polished than his old partner Jamal’s did at this point), while Snoop adds a nonsensical hook that ends up being pretty catchy. This was fire.

Ridin’, Slipin’ And Slidin’ – I would have been perfectly fine if I never heard this song in my lifetime.

Big Pimpin 2 – Part one of this song was on the Above The Rim Soundtrack. Daz recycles his instrumental from the original and lets Big Pimpin Delemond go dolo, as he shares a poem about players, hustlers, pimps and whores. I could have done without this one, but Daz’s backdrop (which would make for the perfect theme music for Snoop’s Corona commercials) was enjoyable.

Let’s Play House – This was the second single from Dogg Food. Daz and Kurupt get ghetto romantic as they invite the objects of their erections to play house, while Michel’le and Nate Dogg join in on the fun, adding some R&B notes to the groove. This one still sounds great.

I Don’t Like To Dream About Gettin’ Paid – Daz takes a cool jazzish Lionel Richie loop and turns it into a melancholy instrumental that he uses to recall the days before he became a rapper and was hustling in the streets. After Daz gets off two solid verses, for some reason they felt it was necessary for Kurupt to tack on a half-ass verse. There’s no doubt that Kurupt is a lyrical beast, but his verse on this one rings hollow and this would have worked better as a Daz solo joint. That said, I still liked the song’s somber vibes and Nate Dogg’s signature crooning is always welcomed.

Do What I Feel – DPG invites the Lady of Rage to the party and she steals the show from her hosts, as she spits a stellar verse displaying her chiseled flow and slick wordplay. She sounds super comfortable and confident over Daz’s slick groove, and probably could have rapped another thousand bars had they not abruptly cut her off. Regardless, this was fire.

If We All Fuc – Snoop returns, once again, to join his DPG bredrin for some very mediocre misogyny.

Some Bomb Azz Pussy – Kurupt opens the song bustin’ a nut inside of *insert song title*. Then Daz drops a deep dark hypnotic bass line with smooth drums laid underneath it, as Snoop joins the duo on this ode to *insert song title*. Snoop gets off what may be, the funniest adlib in hip-hop history, when he says “I smell it, can I inhale it? Let you tell it, I know you got some bomb ass pussy” (me writing the adlib doesn’t do justice to how funny it sounds in real time). Hey, if you’re going to make misogynistic music, at least make it funky and entertaining like this.

A Doggz Day Afternoon – Daz cooks up a raw instrumental that a hungry Kurupt consumes like Garfield does a plate of lasagna. Daz raps on it too, and Nate Dogg even kicks a rare rhyme (his eight bars are followed up with a line from Snoop to close the song), but Kurupt is easily the star of this one.

Reality – Daz and Kurupt invite their homie, Tray Deee to join in on the discussion of the ever present dangers that come with living in the hood. All three participants spit quality bars over Daz’ somberish backdrop, but none of them sound authentic. An introspective 2pac verse would have sounded great over this beat.

One By One – Daz lays another funky gangsta bop that he sounds decent over and Kurupt sounds fantastic on. That’s all I got.

Sooo Much Style – Tha Dogg Pound closes out Dogg Food with a mellow backdrop that they use to boast, talk their shit and brag about how much style they have. They both turn in serviceable verses, but I really enjoyed the melodic chords in the instrumental. It makes for the perfect soundtrack for a cloudy day.

Going into Dogg Food I was expecting to hear about a whole lot of guns, gangsta shit and misogyny, you know, like most of The Chronic and Doggystyle. There is a little bit of all three on the album, but Tha Dogg Pound spends most of their time on some emcee shit, proving to both coasts and every point in between that they belong in this here game we call hip-hop. Kurupt pretty much murders every track he spits one with his smooth flow and slick wordplay, while Daz proves to be a competent B mic, laying down a quality batch of clean G-funk grooves to keep your head bobbin’ for most of the album. Like most albums, Dogg Food comes with a few shortcomings, but overall, it’s a great debut from this often overlooked Death Row duo.