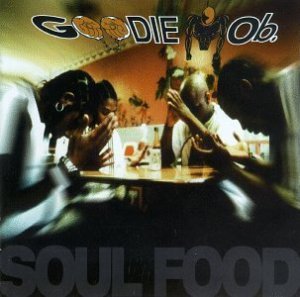 Homage must be paid to Outkast, whose 1994 debut album, Southernplayalisticadillacmuzik’s critical acclaim and commercial success helped open the door for other Southern emcees and forced the rest of hip-hop to start to take the south serious, because, as 3 Stacks so eloquently put it at the 1995 Source Awards: “The south got something to say”. One of the beneficiaries of Outkast’s toil and labor would be their Dungeon Family brothers, Goodie Mob, who also had something to say. We first heard from the Atlanta-based foursome of Cee-Lo, Big Gipp, Khujo and T-Mo on Outkast’s debut, as they would all make cameos and eventually, they would also sign to LaFace Records, releasing their debut album, Soul Food, in November of ’95.

Just like their Outkast bredrin, Goodie Mob would call on Organized Noize to produce the entire album (with a little outside help, of course) and 3K and Big Boi would make cameo appearances on the album as well. Soul Food received positive reviews and Goodie Mob would follow in the commercial success of Outkast, as the album would earn the foursome a gold plaque.

I haven’t listen to Soul Food from beginning to end in a long time, so let’s see how it’s held up over the years.

Free – Soul Food opens with some bluesy chords that a stacked vocaled Cee-Lo uses to wearily sing from the pain deep in his soul, expressing his desire to experience true freedom. This may be the most heartfelt intro in hip-hop history.

Thought Process – Organized Noize creates an airy semi-sorrowful backdrop and each member of Goodie Mob gets a chance to share their feelings on the stress, drama and bullshit that comes with being a young black man in America. Cee-Lo gets off a stellar verse, and even out-rhymes his guest, Andre 3000 (granted, 3 Stacks was just entering his soul searching introspective stage and hadn’t fully completed his metamorphosis into the alien that would destroy every earthling instrumental thrown at him, but it’s still an impressive feat). This is one of my favorite Goodie Mob records and it has aged very well. Fine wine.

Red Dog – Short interlude to set up the next song…

Dirty South – Most of Goodie Mob sits this one out and Big Gipp is joined by Big Boi and Dungeon Family affiliate, Cool Breeze on this ode to drug dealing in the dirty south. I’m assuming, since 3 Stacks got a cameo on the previous song, GM felt they had to let Big Boi get a verse off as well; that is the only explanation I can come up with for them forcing his pimp-laden rhymes that have nothing to do with the subject at hand into this song. Regardless, the instrumental is hard, the hook is catchy and this song introduced me to one of the funniest slang terms of all-time, “Clampetts” (in reference to Jed Clampett from The Beverly Hillbillies): a term Goodie uses to call redneck white dudes.

Cell Therapy – I just found out going into this post that this was the first single from Soul Food, even though I don’t remember hearing it on the radio or ever seeing the video get played back in the day. Regardless, Goodie uses the semi-creepy backdrop to discuss conspiracy theories and The New World Order. Once again, Cee-Lo gets off the best verse, and the catchy hook brings some levity to help break up GM’s heavy content. All in all, this was dope.

Sesame Street – The Sesame Street that Goodie Mob’s talking about isn’t the same pure and innocent street that Big Bird and his crew sung cute songs about letters, words and numbers on. Instead, their Sesame Street is filled with memories (or nightmares) of the drugs, violence and poverty that framed their childhoods. With some help from a tasty Organized bop, our hosts take their pain and turn it into a dope song. I completely forgot about this one, but it was a pleasant reacquaintance.

Guess Who – Organized constructs an emotionally intense backdrop and each of the Mob members gets off a heartfelt verse of both fond and painful memories about their mamas. I’ve always loved this song, and it hits a little stronger since losing my own mother recently.  Rest in peace, Barbara Jean.

Serenity Prayer – It plays just as it reads: GM recites the serenity prayer in unisons.

Fighting – And the struggle continues: Over a bleak backwoods backdrop (it’s so deep in the woods that if you listen close enough you can actually hear crickets in the background of the instrumental) our hosts address the real struggle, which is not against flesh and blood, but against principalities, against powers, against the rulers of the darkness of this world (Check out Ephesians 6:12 for more); and of course they put their abstract southern twist on it. Speaking of struggle, the normally vocally on point songstress, Joi struggles to find her footing and sounds like she might be singing in the wrong key or maybe the out of key singing was all a part of the plan to play off the song title. At the end of the song, Cee-Lo admits he didn’t write a verse for this song and then pulls out his soapbox to preach a nearly two minute sermon calling for brothers to be accountable and take responsibility for their actions. He also reveals the semi-ridiculous acronym hidden within the name “Goodie Mob”. Cee-Lo makes some good points, but I’d much rather hear him singing and rapping than preaching. This song has too much substance to call it filler material, but the material presented wasn’t enough to fill me up.

Blood – Over mellow piano chords and subdued drums, Cee-Lo kicks a quick refrain calling for unity in the black community and an end to black on black violence. Goodie Mob would eventually turn this short interlude into a full-fledged song that would appear on the America Is Dying Slowly compilation album, released in 1996.

Live At The O.M.N.I. – OMNI has double meaning in this song: For you young bucks, The Omni Coliseum was the place the Atlanta Hawks called home up until 1997 ; the Goodie Mob, who are also from Atlanta, use it as an acronym for “One Million Niggas Inside”, which is their militant acknowledgement of unity and the power in numbers. This isn’t my favorite song on Soul Food, but it’s still a decent audible bop to chew on.

Goodie Bag – Organized builds this backdrop around a sexy guitar lick that Khujo, Big Gipp and T-Mo use to give us more substance, while Cee-Lo takes off his shirt and lets all his flab hang out, as he talks his shit and kicks a true freestyle at the end of his verse and still walks away with the strongest bars. This is easily one of my favorite songs on Soul Food.

Soul Food – This title track was also the lead single from the album. Our hosts go back and forth referencing the literal and figurative food that has fed their souls through the years over a deep southern fried funk Organized Noize groove. Undeniable classic.

Funeral -Short interlude that sets up the next song…

I Didn’t Ask To Come – Organized Noize places emotional strings over pulsating drums that Goodie Mob uses to discuss the seemingly never ending cycle of their homies being murdered in the Atlanta streets. The song is punctuated by the heartfelt hook that has the foursome contemplating their own mortality and wrestling with their frustration and anxiety with death (“I struggle and fight to stay alive, hoping that one day I’ve earned the chance to die…pallbearer to this one, pallbearer to that one, can’t seem to get a grip, cause my palms is sweatin'”), which includes another powerful verse from Cee-Lo. If this song doesn’t touch your soul, you might need to be checked for a pulse.

Rico -Short interlude to set up the next song…

The Coming – Goodie Mob invites their homeboy, Witch Doctor to chant the hook and add a verse along with theirs, as they collectively attempt to start the revolution over some funky instrumentation, driven by Colin Wolfe’s dense bass play.

Cee-Lo -Cee-Lo briefly talks about how God is working through white folk’s evil deeds in order to…help black people?? I don’t quite agree (or understand) his theory, but at least he kept it short.

The Day After – The last song of the evening finds Goodie Mob discussing death and what comes after they’ve completed their journey here on earth. Much like our hosts’ content, Organized Noize’s instrumental sounds dark, sad, triumphant and beautiful all at the same time, while Cee-Lo and the guest female vocalist, Roni’s soul-touching-church-fueled singing on the hook are the glue that hold this song together. This makes for the perfect ending for an album packed with so much meaty material.

Soul Food lives up to its name, as Goodie Mob doesn’t waste any time with fluff or nonsense, but instead, they use every track to dish out a heapin’ helpin’ of substance and food for thought. It’s not an easy feat to feed a hip-hop audience this much consciousness for an entire album and make it sound entertaining, but Goodie Mob manages to pull it off with only a few visible scratches left on them. It’s clear from the jump that Cee-Lo is the Goodie that makes this Mob go, as his potent thought-provoking rhymes packaged in his colorful voice and delivery (and when you factor in his ability to bolt out soul-stirring notes, it’s no surprise that he would soon become the break out star of the team) keep this boat afloat, while the other three do a serviceable job patching in a hole he might have missed here or there. Organized Noize provides a quality batch of instrumentals rich in protein, calcium, minerals and calories that help Soul Food‘s meaty messages stick to your ribs and at the same time entertain.