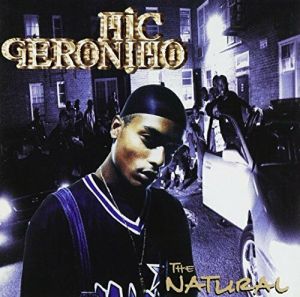 After the release of two of the greatest hip-hop albums of all time in Illmatic and The Infamous, the borough of Queens was on complete fire in the mid-nineties. Nas and Mobb Deep’s success made the door a little bit easier to enter for inspiring emcees coming out of Queens, so it was only a matter of time before someone else would take the baton and try to continue on with the borough’s winning ways. Who would be next? Insert Mic Geronimo into the game.

Born Michael McDermon, Mic Geronimo was discovered by a young up and coming producer, soon to be label exec and music mogul, Irv Gotti, who was impressed after hearing the Queens native rap at a local high school talent show. Irv would connect with Mic, producing his demo and helped him shop it, and it would eventually land Mic a deal with Blunt/TVT Records, where he would release his debut album, The Natural.

Along with production from his mentor, Irv Gotti, The Natural would also include production work from Buckwild, Da Beatminerz and Mark Sparks. Despite the backing from the impressive list of heavy hitting beatsmiths, the album moved miniscule numbers and made minimal noise, but it did bear fruit to at least one unheralded classic record (will get to that in a bit). Mic would get one more chance with TVT (releasing Vendetta in ’97), before walking down the independent label path to irrelevancy and joining Group Home on Nas’ “Where Are They Now” MIA list.

Side note: Mic does shoutout his Queens bredrin “Q-Tip and Phife” in the liner notes, so that satisfies our Tribe Degrees of Separation for this post.

The Natural – The first track of the night features a smooth head nodder (brought to you courtesy of Mark Sparks) that’s perfectly teed up for Mic to knock out the park. Unfortunately, our host is only able to squeeze a bunt single out of it (speaking of baseball references, it was dope to hear Mic shoutout the legendary Negro League and MLB pitcher, Satchel Paige at the end of both of his verses). This song is followed by the first of a series of skits that finds Mic and his crew flagging down a Taxi to hitch a ride to their destination, only to rob the driver once they get to there. I won’t mention these skits again during this post, because they’re boring and dumb as shit.

LifeCheck – Mic spits your average street shit on this one, and he doesn’t sound bad, but his bars just don’t have any character. I was more disappointed in the Da Beatminerz bland backdrop that rings as hollow as a chocolate Easter bunny.

Wherever You Are – Mark Sparks gets things headed back in the right direction with this warm soulful groove built around an ill Bob James loop, while Mic Geronimo, once again, spits passable bars, but gives us nothing mesmerizing or memorable. Despite Mic’s mediocre performance, the instrumental and the catchy hook make this song worthy of listening to. It ends with a strongly-lisped slightly wino-slurred male voice sharing a poem about being a master, which is supposed to set up the next song…

Masta I.C. – This was the second single released from The Natural. Buckwild digs into his bag of tricks and pulls out this dark and mystical soundscape, while Geronimo sounds a hundred times better than he did on the three previous songs; his swaggy cadence and wordplay on this one makes him sound like a completely different rapper than we heard earlier in the evening. This brilliant record is an unheralded masterpiece, and without hearing the rest of his catalog, I’d be willing to bet it’s his magna opus.

Man Of My Own – Mic sounds like a mixture of Prodigy, Havoc (both of Mobb Deep) and randomly, Lil’ Dap, on this one, as he continues to spew street life inspired rhymes with moderate success. Chyskillz (rip) hooks up a decent dim backdrop, but not decent enough to make Mic’s rhymes thrive or make this song memorable.

Time To Build – Mic invites three future hip-hop Hall of Famers to take part in the cipher session with him: Ja Rule, Jay-Z and the late great dog himself, DMX. This song was recorded on the heels of the legendary battle between Jay-Z and DMX that took place in 1994, and Irv Gotti (who was going under the alias of DJ Irv in ’95, and is also the producer of this track) swears that most of Jay’s bar were aimed at DMX, who he was allegedly envious of because X was given the coveted last verse on this song. I didn’t hear anything in particular that sounded like a shot at X, but what I did hear was a subpar cipher session over a dry ass instrumental with the most unlikely of the four participants, Ja Rule, gettin’ off the strongest verse, and you’re a lie if you listened to this shit in ’95 and thought Ja, Jay and X would go on to have the successful careers in hip-hop that they did. Time is truly, illmatic. Rest in peace, Dark Man X.

Shit’s Real – Irv Gotti gets his second and last production credit of evening, as he flips a few loops from Deniece Williams’ classic record “Free” that Mic uses to half-assly show how real he keeps…shit. Like most of his lyrical output to this point, Mic doesn’t say anything worth quoting or rewinding, but the feel good vibes that permeate through the instrumental give this one plenty of replay value. Side note: This song begins with a skit that has Geronimo spittin’ game to a random chick and underneath their conversation you can hear a record playing in the background with Mic rapping the lyrics to this song over the instrumental to Zapp’s “Computer Love”, and it sounds pretty dope.

Three Stories High – With his second production credit of the evening, Buckwild blesses our host with a mean and grimy backdrop that he uses to reminisce and talk his shit, and he invite his crony, Royal Flush to join in on the fun. Both parties turn in solid verses, but  Buckwild’s fire instrumental is the engine that makes this car go.

Sharane – Geronimo uses this hard and dimly lit backdrop to share a hood version of the precautionary biblical tale of Samson and Delilah, with our host being Samson and some random chick he meets at a party named Sharane, playing the role of Delilah. Hey, wait a minute…could this be the same Sharane that would try to set up our friend, Kendrick Lamar, seventeen years later? Probably not. Kendrick’s assailant spelled her name with an “e” instead of an “a” and she lived in M.A.A.D. city, not the Wasteland. But I suppose she could have changed the spelling of her name, became a cougar and relocated to the Westside…but I digress. Mic’s storyline is decent and I thoroughly enjoyed Mark Sparks’ head nod inducing instrumental.

Men V. Many – O.C. and Royal Flush join Mic Geronimo to form, what O.C. calls a “dream team”, designed to take on the world aka many. To call these three emcees a dream team is a bit blasphemous, but it was downright disrespectful (and hi-larious) for them not to include their guy, Ceelow (not to be confused with CeeLo Green from Goodie Mob), who drops in at the mid-way point of the song to spit a verse, in their so-called “dream team” roster. All four of the participants contribute lukewarm bars and Da Beatminerz instrumental comes off a bit dull.

Train Of Thought – After two stellar instrumentals, Buckwild misses his chance at a hat trick by serving up this boring backdrop. Mic follows Buckwild’s lead and this one nearly put me to sleep.

Things Change – You can’t argue with this song title. Mark Sparks gets his final production credit of the night, lending Geronimo this slightly r&b tinged instrumental, as he invites Royal Flush to join him to spit verses about coming of age in the streets, and some uncredited male vocalists contribute a solid hook. After all the dark, gloomy and grimy production we heard on The Natural, the vibes on this song are quite a contrast, but a welcomed one.

Masta I.C. (Remix) – I was hoping Mic G would bring back the brilliant Buckwild instrumental from the original mix and invite O.C. and his Queens bredrin, Nas and Prodigy, to spit verses next to his, but he didn’t. Instead, we get an instrumental that’s average at best, forgettable cameos from Mr. Cheeks and Freaky Tah (rip) of the Lost Boyz and a semi-irriating hook from an uncredited female voice. And with that, we’re done.

On paper, The Natural has all the ingredients for the makings of a classic album: a competent emcee with production from some of the most respected hip-hop producers in the game. But unfortunately, the written word doesn’t always translate well when made audible. Thanks largely to Mark Sparks and Buckwild, some of The Natural bangs, but each banger is met with mediocrity, and the last I checked, a fifty percent success rate doesn’t constitute great or classic. More disappointing than The Natural’s hit and miss production is our host’s performance. Mic Geronimo definitely has the potential to spit high-quality bars (as he demonstrates on “Masta I.C.”), but his undynamic vocal tone, coupled with his run of the mill content and the album’s patchy production, makes it easy for the listener to get distracted or just lose interest. The Natural’s not a terrible album, but compared to the high quality output from some of Mic’s Queens peers, it’s definitely a disappointing debut.