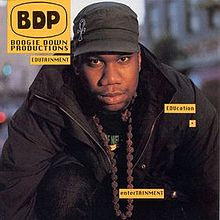 Anyone familiar with this site knows I hold Kris “Krs-One” Parker in high regards as far as emcees go (if not, feel free to read the prior BDP reviews).  If you’re familiar with this blog you also know that with the exception of By All Means Necessary

I was not crazy about the early output from BDP, no matter what you or the “critics” want me to believe.  Since Kris is a more than capable emcee, obviously most of my struggle with the first three albums was the production.  Now, I will admit that I didn’t become familiar with the first three albums until years after their release, which I’m sure also plays a part in why most of the instrumentals sound hollow, stale, dated, and ultimately not so enjoyable, in my opinion.  Yeah, I was familiar with “The Bridge Is Over” and their other singles, but my first real introduction to a Boogie Down Production album was Edutainment

is the fourth of five Boogie Down Production album to date (I’m not including Live Hardcore Worldwide, since that is just old material performed live). I still remember getting my mom to buy the cassette version of this album for me at Target back in the day.  Did I just say cassette? Man I feel old.  Edutainment

, which if you haven’t figured out it a combination of the words education and entertainment (and for the really stupid people out there it’s spelled out clearly on the album cover), would go on to receive critical acclaim and earn Kris and company a gold plaque.

Dope album title, but you can’t always judge a books (or album) by it’s title…or cover?  You know what I’m trying to say.

Exhibit A – The album opens with a exert from one of Krs-One’s lectures in which he explains what hip-hop means in America and his purpose for using it.

Blackman In Effect – Kris’ lecture merges into a haunting yet bangin’ instrumental that serves as the perfect backdrop for the Teacher to do just that.  Kris drops lesson upon lesson, and even manages to sneak in a shot at the Juice Crew. This definitely takes me back to the time of a young and hungry Krs-One, reminding me why I fell in love with hip-hop in the first place.

Ya Know The Rules – Kris provides himself a simple but effective instrumental to continue his lessons over, while D-Nice adds a few adlibs at the beginning and in between verses.  My theory on D-Nice’s inclusion was to prove to the listener that Boogie Down Productions isn’t completely a one man crew.

Exhibit B – An exert from a speech from Kwame Toure that points to the power there is in numbers.

Beef – Love this song.  From Kris’ bouncy and bass heavy instrumental to his detailed and potent dietary lesson, this song works on all levels. With the rampant pace cancer cases are growing some of Kris’ theories could hold some truth, folks.

House Nigga’s – This is dedicated to… guess who?  The liner notes give credit to D-Square and Sidney Mills for engineering this one, and since Sidney Mills is credited for playing keys, I think it’s safe to assume they produce the track (even though Kris closes thing out by stating he “produced and directed” it).  Overall this was an enjoyable listen.

Love’s Gonna Get ‘Cha (Material Love) – In my opinion the best song in the entire Krs-One/Boogie Down Production catalog (yeah I said it).  The teacher proves he can spit a story with the best of them (with a solid moral as well) over a smoothed out instrumental provided by, Pal Joey?  Corny producer name aside, this is a bona-fide classic.

100 Guns – Anyone familiar with KRS-One’s work knows he likes to flirt with a ragamuffin style occasionally, which he chooses to use for this song. His storyline is interesting, but there is no way you would still be alive after firing several shot at the cops, Kris.  You know that dude. Other than that flaw this was pretty dope.

Ya Strugglin’ – This is Kris’ call for all assimilated African-Americans to take a look in the mirror. The Kwame Toure exerts at the beginning and in between verses is a nice touch (especially his joke about a perm at the end). Although the liner notes don’t say, it sounds like Kris might have sampled Prince’s “When Doves Cry” for the instrumental? Maybe?

Breath Control II – While Kris is easily a top five emcees of all time, he’s not often recognized for his production. This instrumental (like many he produced on this album) bangs! Oh, and course he murders it with the lyrics.

Edutainment – The teacher once again leaves you with plenty to chew on on this title track. Very nice.

The Homeless – Kris provides a humbling message to remind all blacks of their history and to that effect, our current state as well. Mike Nuceeder’s tribal drums serve as the perfect backdrop for Kris content.  Sometimes hip-hop needs to be sobering, folks.

The Racist – I wonder how KRS-One will be viewed by the world 100 years from now.  Yes, his theories and philosophies have changed more than newborn quintuplets diapers, but it’s songs like this that allow you to look past his duplicity and appreciate his thought process as he takes his time to analyze the different angles of racism (even pointing the finger at blacks as one type of racist). Well done, Kris.

7 Dee Jays – Posse cut, which gives each member of Boogie Down Production a chance to show what they can do on the mic.  Remember Jamalski?  I wonder what he’s doing these days.  Now Kris, you spit every line on every song up to this point, was it really necessary to get two verses on the posse cut?  Really?

30 Cops Or More – Hmmm…does it really take 30 cops to arrest a brother?  Maybe that’s why I’ve never been arrested: there’s never been 30 cops around to bother with attempting to.  This was a mediocre ending to an otherwise well done album.

Exhibit F – Once last exert from a Kris lecture and with that we’re done.

It’s been a while since I last listened to Edutainment

in its entirety. After listening to it tonight I have to say that Edutainment

is easily the most consistent album in all of BDP’s catalog, and probably all of Kris’ solo discography as well.  Yes, BDP had hit singles throughout the first three albums, and Kris has always been a beast on the mic; but Edutainment

brings everything together: Kris’ meaty verses paired with raw hip-hop beats makes for a nearly flawless album, which makes Edutainment

one of the most underrated (or just forgotten) albums in hip-hop.