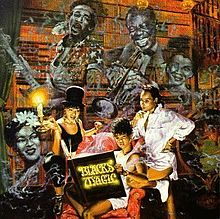 Another one that I’ve had in my collection forever but it somehow managed to disappear from my spreadsheet.  Insert this one after Holy Intellect

We last left our friends Salt N Pepa in 1988 with their sophomore effort and second consecutive gold selling album A Salt With a Deadly Pepa.  The group as well as the first two albums, were all concoctions of the mad scientist Hurby Luv Bug (who also went under the alias of Fingerprints for a while), who pretty much wrote and produced both albums. So for their third release Blacks Magic

the ladies stuck to the age-old adage of if it aint broke don’t fix it.  For the most part.

Hurby did relinquish some of his power this time around as Salt and Spinderella wrote and produced a handful of tracks, and  a few members of his crew, The Invincibles co-produced a few tracks, which I’m sure was done under Hurby watchful eye.  This turned out to be a wise adjustment for Hurby and his angels (at least for his wallet and their purses) as Blacks Magic

would top their previous two efforts and earn the ladies their first platinum plaque, laying the foundation for their next and mega successful album Very Necessary

, but will cover that at a later date.

Numbers may not lie but they don’t tell the complete truth either.

was a pretty big hit on the pop charts back in the day.  SNP have always done hip-hop tinged with r&b, so the blatant r&b touch on this one should come as no surprise. At times I have viewed acts who fuse the two genres as sellouts, but when SNP do it somehow it sounds authentic. Salt steps behind the boards and provides a pretty dope instrumental for herself and Pep to spit over.  For the most part both ladies stick to the topic at hand (straying a little bit during the final verse), while the invited guest vocalist Jacci McGhee makes the most of her opportunity, turning in a solid performance singing the hook. If you don’t like your hip-hop fused with its older brother, I understand. But in my opinion this falls in the top 5 of SNP songs of all time.

Doper Than Dope – After opening things on an inspiring note, the ladies decide it’s time to get into some straight hip-hop ish, and what better way to evoke that than sample Bob James’ “Nautilus” for the backdrop, which happens to be hip-hop’s favorite source material. Salt and Pep have never dropped heavy rhymes that would make you hit the rewind button but they manage to bounce off each other nicely on this one.

Negro Wit’ An Ego – The song title might lead you to assume this is a shot at those uppity brothers who think they’re better than the rest of the world, but you know what they say happens when you assume.  Instead this is SNP professing how proud they are to be black women. Nice message from my Nubian sisters, but Hurby’s instrumental is blah, leaving the overall outcome of the song mediocre.

You Showed Me – This was another single off of Blacks Magic

, and like all of the other singles released from the album it is heavily r&b flavored, which should come as no surprise since it’s a remake of an old r&b song that was original recorded by a group call The Turtles back in the sixties, but has been covered by several acts since then.  The ladies use this Excalibur produced instrumental to share how they went from betrayed dedicated lovers to bitter broken bitties, who now play by the same rules as their unfaithful lovers, and the instrumental fits the content perfectly. They could have gotten a better vocalist to sing the hook as this Joyce Martin chick sounds like an uninspired hot mess, but overall the song works well.

Do You Want Me – Hmm.  While scanning the track list on the cd jacket of Blacks Magic

, it occurred to me that almost half the songs from the album were released as singles, which explains why they were able to move over a million units.  They marketed the hell out if.  Hurby Luv Bug steps back behind the boards on this one and provides a banger for Salt to spit over (with an occasional ad-lib from Pepa), as she questions a boyfriend’s intentions, who’s patience is also being tested as she makes him wait to receive the forbidden fruit. Hurby Luv Bug might catch a lot of flack for intentionally creating pop songs but occasionally in his production heyday he would flirt with musical genius, similar to Will.i.am.  This song bangs!

Swift – Steevee-O gets his second production credit of the night as Salt goes solo for the second consecutive song.  She’s in straight battle mode as she tries her best to recite Hurby’s ghost written rhymes like she means them, with decent results.  But no one listens to a SNP record to hear vicious battle rhymes, anyway.

Blacks’ Magic – Salt starts this out by revealing that Pepa’s absence from a portion of the album was related to the birth of her first child.  So Spinderella (who actually gets the production credit for this song as well) plays Robin to Salt’s Batman, as they tag team the mic, explaining both the negative connotations and the positives behind the term “black”. This was serviceable but far from memorable.

Start The Party – Salt gets her third production credit of the evening. While it’s nice to see her expanding her horizons, its unfortunate this song is completely garbage.

this is easily the biggest and most commercial hit on the album.  I believe at one point MTV was even using it for its AIDS prevention campaign back in the day. Hurby samples the Staple Singers hit “I’ll Take You There” for the backdrop as Salt uses her verses to discuss the birds and the bees. As many times as I’ve heard this song I’ve never noticed Pep doesn’t contribute a verse.  Regardless of how big a hit this was and the influence it had on the safe sex movement, I’ve never cared much for this one.

Independent – This is hands down my favorite song (or tied for number one with “Push It”) in all of Salt N Pepa’s catalog, and not just because I wanted to sop Salt up with a biscuit every time I watched her ass-ets float across my tv screen in that sexy white outfit during the video, back in the day (*sigh*I need a moment). The ladies invite Sybil to sing the hook on this ode to the independent woman, which Salt is not only credited with writing but also producing. Last song. Now I’m free to checkout the video on YouTube and rekindle my obsession with Salt.

is a mixed back of tricks (pun intended). Five of the thirteen songs were released as singles that were all pretty popular upon their release. While I enjoyed four of the five singles, the rest of the album consists of mediocre to terrible filler tracks, making Blacks Magic

a commercial success but in my humble opinion, an overall underwhelming listen.  SNP’s next release would sell over 5 million units, so I’m sure they would tell me to kiss their underwhelming asses.  An offer I might take 2/3 of the group up on.