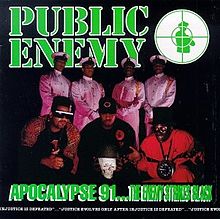 Fear Of A Black Planet

ends with someone asking Chuck D to talk about the future of Public Enemy. As Chuck starts to respond the album abruptly ends. As you may remember the seams of the team begin to fall apart after It Takes A Nation

when internal strife caused beefs amongst some members and others decided to leave the group. With all the uncertainty surrounding PE, Chuck’s silence was really the only answer he could give.

The true answer would be PE’s 4th album Apocalypse ’91…The Enemy Strikes Black . Chuck and Flavor would return taking the same militant stance as their previous work, but for the first time the Bomb Squad would not be responsible for  the sonic side of a PE record (they would receive an Executive Producer credit, though). Instead Stuart Robertz, Cerwin (C-Dawg) Depper, Gary G-Wiz, and the JBL, a collective know as the Imperial Grand Ministers Of Funk (it just rolls off the tongue, doesn’t it? ), would handle the production duties.

Apocalypse ’91 would earn PE another platinum plaque but the initial reviews were mixed. Let’s see how it sounds today.

Lost At Birth – This one opens with Chuck and Flav sounding like sound bites as they take turns repeating the same phrases over and over again, before Chuck spits one swift verse and this one is over. The Ministers Of Funk’s instrumental walks a fine line between being a head banger and an annoying bunch of noise.

Rebirth – After a brief rambling from Flav, Chuck comes in to spit one quick verse and sounds just as hungry as he did in 87′. Only sharper. Chuck single handily made this miniscule Ministers of Funk beat sound better than it really is.

Nighttrain – This was the second single released from Apocalypse ’91

. The premise for this song is built around Chuck’s line from “Welcome To The Terrordome” that “every brother aint a brother”. Chuck’s content is solid but I’ve never been a fan of this song, mostly because of the uninspired instrumental. The Pete Rock’s remix (which includes an added verse from his partner in rhyme CL Smooth) is much stronger than the original.

Can’t Truss It – This was the lead off single. Chuck takes an in-depth look at the African slave trade and briefly discusses how it affects black America today. He gives a detailed description as he speaks from the perspective of a captured African recalling his 3 month trip on water as he’s “bruised on the cruise” to America. Deep shit. The Ministers of Funk back up Chuck’s bombastic performance with a banger of an instrumental.

I Don’t Wanna Be Called Yo Niga – (No that is not a typo (at least not on my behalf). That is how they spelled the “N” word on the liner notes) What would a PE album be without the comic relief of Flavor Flav? Flav is the ying to Chuck’s yang, as he kind of serves as a brief intermission between the serious sermons from the hard rhymer. Over a funky instrumental Flav declares that he does not want to be called the “N” word, minus one “g”. The song isn’t bad but the repetition and terrible singing during the hook start to grate on the ears.

How To Kill A Radio Consultant – This reminded of the Bomb Squad days. Over a hard instrumental Chuck goes for the neck of whoever is behind the wack radio programming. “Can I kick it? Who the hell is on the radio”, was that a shot at ATCQ? If anybody has the inside scoop, hit me in the comments. Regardless, this song was fire.

By The Time I Get To Arizona –  And just like that all the momentum built up on the previous song comes to a screeching halt with the dreariness of this one.  The subject is based on the controversial move by then Arizona governor Evan Mecham who refuse to recognize Martin Luther King Jr. Day as a national holiday in Arizona (which after years of boycotting by businesses, sports leagues, and musicians, the bill eventually was passed in 1992 officially making it a national holiday). The video depicts PE traveling to Arizona and killing Mecham (who in real life was impeached after being brought up on charges stemming from his mishandling of public funds). Unfortunately, I couldn’t even focus on Chuck’s lyrics because the instrumental was killing my will to live. Kudos on the intent but this is not a good song.

Move! – Chuck continues his verbal rampage on all perpetrators of injustice that get in his way. The Minister of Funk’s instrumental makes for a suitable backdrop for Chuck to get his point across.

1 Million Bottlebags – While most rappers celebrate being high and drunk, Chuck uses his microphone to address the dark truths about alcohol consumption, specifically how it affects the black community. Deep. Too bad the instrumental sucked elephant balls.

More News At 11 – Flav is back with his second solo joint of the evening with an assist from the media assassin Harry Allen on the intro, hook, and outro. Flav start this one-off by curiously repeating “I didn’t die right” (which must have been an inside joke, because I have no idea how that ties in with this song), before he spits two verses recalling criminal stories he heard on the news. The instrumental was softer than what you’re accustom to hearing on a PE record but it was a nice change of pace.

Shut Em Down – This was the third single released from Apocalypse ’91. Solid song it its own right, but the Pete Rock remix (which also includes a verse from the PR himself) is so fire it makes this mix sound like a demo.

A Letter To The New York Post – Flav gets his third and final solo record of the evening. Flav fires shots at The New York Post for reporting on stories about his personal life that he claims they didn’t get right. He owns up to smacking his baby momma, but apparently he thinks there was some justification for his actions? He saves the last verse to take a shot at JET magazine for running with the same story. Chuck D holds down the hook as he degrades and spill historically facts about both publications. This was slightly entertaining.

Get The F— Outta Dodge – This was previously released as the B side from the Fear Of A Black Planet single “Can’t Do Nuttin’ For Ya Man”. This might be the best instrumental on the entire album. It makes for the perfect backdrop for Chuck’s tale of being profiled by law enforcement while riding around with a booming system.

. Anthrax’ rock imprints are all over this one musically (they’re playing it live) and they even spit Chuck’s last verse for him. I wasn’t feeling this one, but I’m sure its inclusion helped move a few more units.

I mentioned at the end of the Fear Of A Black Planet review that it marked the pinnacle of PE’s reign. Apocalypse ’91 marks the first step headed back down the hill of supremacy. Chuck and Flavor’s King and court jester chemistry is still fully intact but the album suffers from the missing chaotic production style of the Bomb Squad. The Imperial Grand Ministers Of Funk (whose production at times sounds like a cheap Bomb Squad imitation) do a decent job on the production side, but it doesn’t quite live up to the PE standard PE fans are accustomed to.