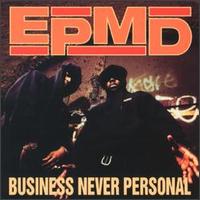 EPMD is one of my favorite hip-hop groups and without question one of the greatest groups in the history of hip-hop. The chemistry of Parrish’s no-nonsense lyricism and Erick Sermon’s lazy and heavily lisped flow over their signature funk sound is undeniable. By 1992, EPMD was already 3 albums deep, and all three albums were certified gold. The duo would return in 1992 with their 4th release, sticking with the “business” theme, titling it Business Never Personal

, Parrish and Erick begin to squabble over some financial disputes. Parrish’s home was robbed during this time, and rumors that Erick Sermon hired and sent the culprits to do this dastardly deed begin to surface. Shortly after the album’s release, EPMD would break up, making the album title even more fitting. They would both release two solo albums before kissing and making up and going on to release three more albums together, but we’ll get discuss those in-depth at later dates.

was a critical success (including a 4.5 mic rating from The Source) and would keep the duo’s Midas touch in tact, as it would go on to be the duo’s 4th consecutive gold selling album. Not too many artist can say that, yet alone an underground hip-hop group.

Boon Dox – EPMD opens up the show with an instrumental that is equally raw, funky, and soulful. Erick and Parrish’s rhymes are decent, but their instrumental is the real star of this one.

Nobody’s Safe Chump – Erick and PMD hook up a pounding semi-mellow mid-tempo groove that the duo use to tough talk all over. This is a slept on beat by EPMD, and very suitable for midnight marauding.

Can’t Hear Nothing But The Music – They can’t all be great, but this is still a decent listen.

Chill – This is probably my favorite instrumental in all of  EPMD’s storied catalog. The duo loop up a portion Foreigner’s “Street Thunder”, lay it over the bass line from Zapp’s “Dance Floor” and the results are epic. Erick and P drop competent rhymes and sound right at home spitting over it. Well done.

Head Banger – This was the second single from Business Never Personal

and is easily one of the top 10 cipher songs in hip-hop history. The E-Double and PMD invite fellow Hit Squad members, K-Solo and Redman, to join them as each party involved spits a verse over a raw funk instrumental built around a loop from Parliament’s “One Of Those Funky Things”. Erick, Parrish, and K-Solo turn in decent to solid verses, but Redman steals the show and completely shuts shit down. This song combined with the previous song make for a nice one-two punch.

Scratch Bring It Back (Part 2 – Mic Doc) –  DJ Scratch combines Busta Rhymes’ “wheel up, ease up, bring it back, come rewind” line from “The Scenario” with KRS-One’s “rewiiiiind!” from “Duck Down” and places them over an up-tempo beat that Erick spits a decent verse over. Parrish starts his verse over the same instrumental with an intentionally choppy and sloppy flow (that he would further indulge in on his solo efforts). After being reprimanded by Erick Sermon, who refers to P’s experimental flow as “bullshucks”, Scratch completely changes things up with a raw beat that helps PMD sober up and get back on track. This was dope.

Crossover – This was the lead single from Business Never Personal

. The duo build the instrumental around the bass line from Idris Muhammad’s “Say What” and add a Roger Troutman vocal sample on the hook, as they pledge their allegiance to the underground, vowing never to sellout. Ironically, this single was probably the closest thing to a pop hit for EPMD, as it would earn them a gold plaque. This still sounds good today.

Cummin’ At Cha – EPMD hooks up a dope instrumental and lays a Cypress Hill and D-Nice vocal sample on the hook. After Erick drops a mediocre rhyme and Parrish completely mails his verse in, Dray and Skoob (bka Das EFX) take a page out of Redman’s book, closing this one out and once again stealing the show from their mentors.

Play The Next Man – Erick and PMD tell their significant others to kick rocks after discovering their be cheated on by them. This was definitely filler material, but still better than your favorite rapper’s filler material.

It’s Going Down – This was on the Juice Soundtrack. It feels like I’ve been saying that a lot lately. Click here to read my thoughts on it.

Who Killed Jane – Never been a huge fan of the Jane series and this one is no exception to the rule.

, neither E or P sound completely committed, which may lead one to believe that maybe the internal strife effected the quality of their writing.  There’s occasional flashes in the pan from the duo, but its their strong production and solid contributions from the Hit Squad members that make Business Never Personal

a strong effort from one of the best groups to ever do it.