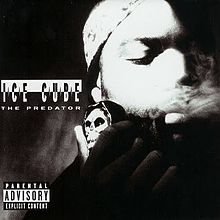 As I mentioned a few weeks ago in the Guerillas In The Mist post, Ice Cube was the hottest rapper alive in 1992. After helping put Compton on the map as part of N.W.A. with their controversial debut album Straight Outta Compton, releasing two consecutive platinum selling and critically acclaimed solo albums, as well as making his acting debut, starring in John Singleton’s 1991 hood classic Boyz N The Hood, Ice Cube was definitely a force to be reckoned with.

He would return in 1992, with his third solo album The Predator

. Cube, along with longtime collaborators DJ Pooh (who I will forever remember as Red, getting knocked the fuck out by Deebo in Friday), Bobcat and Sir Jinx would handle the bulk of the production duties on the album, with DJ Muggs contributing a few tracks as well. The album was released on the heels of the Rodney King verdict and L.A. riots, and both subjects are touched upon quite a bit throughout The Predator

would be an even bigger commercial success than Cube’s prior solo albums, as it would become his first double platinum selling record. But here on TimeIsIllmatic we’re more concerned with the critical side of things.

The First Day Of School (Intro) – The Predator

opens with a sound bite from an unsung hood classic American Me.

When Will They Shoot? – DJ Pooh, Bobcat and Cube hook up a sick instrumental to start things off (I love the clap from Queen’s “We Will Rock You” added in to this one); and Cube picks up where he left off at on Death Certificate, as he comes out brash, fresh and focused, addressing several of the inconsistencies and issues that effect African-Americans in Amerikkka. He also manages to slide in a low-key jab at his former running mates N.W.A. (“cause I bust styles, new styles, standing strong, while others run 100 miles…”). I haven’t heard this song in years and it actually sounds better today than it did in the past.

I’m Scared (Insert) – For some reason Cube labels this as an insert, but it’s really just an interlude with some pretty interesting dialogue created by different sound bites linked together.

Wicked – This was the lead single from The Predator

. Torcha Chamba hooks up a high energy backdrop (with some ridiculous drums on it) as our host proclaims how wicked his style is. This is the first song that shows Cube’s evolving rhyme style that sounds heavily influenced by Everlast from House Of Pain. Common would later use the video for this song (which features a few members from the Red Hot Chili Peppers) as ammunition on his Cube dis record “The Bitch In Yoo”, where he says “your lease is up at the crib house niggas get evicted, in videos with white boys talking you get wicked”. Despite Cube’s questionable new flow, Torcha Chamba’s backdrop is a banger! Side note: the “Wicked” single’s b side is a song called “U Ain’t Gonna Take My Life”, in which Cube articulately (for the most part) confronts police brutality with maturity beyond his then 23 years. The Mr. Woody produced backdrop isn’t all that great but Cube’s lyrics make it worth checking for.

Now I Gotta Wet’cha – DJ Muggs gets his first production credit of the evening, as he slides Cube one of his vintage dusty drunken backdrops. Cube uses it to declare open season on genocide contributing gangbangers and the 12 jurors that found the four cops that beat Rodney King, not guilty. Overall, this was decent.

The Predator – For the title track DJ Pooh builds this backdrop around a loop from Johnny “Guitar” Watson’s “Superman Lover”. The instrumental is decent but Cube’s rhymes aren’t focused, and at times he sounds pretty sloppy (especially when he gives a shout out to his new homies, Das EFX and attempts to spit in their style).

It Was A Good Day – This was the second and easily the biggest hit of the three singles released from The Predator. DJ Pooh builds the slick instrumental around a sample of the Isley Brothers’ “Footsteps In The Dark”, as Cube reflects on a wonderful day in the hood, filled with mom’s cooking a pork free breakfast, exploiting brothers with Jordan like skills on the basketball court, taking the homies money in craps, bangin’ out a chick he’s been trying to get with since high school, and caps it all of with the Goodyear Blimp declaring him a pimp for all of South Central L.A. to see. Now that’s a good day. While most of Cube’s rhymes are playful on this one, the song does also have a serious undertone: Cube shows thanks for another day in the land of the living, while also staying alert to the very real possibility of becoming a victim of violence by someone who looks like him or the boys in blue. Because as nice as it is to be declared a pimp, it’s equally as nice not to have to use your AK. This song is near genius; and twenty plus years later it still sounds as good as it did the first time I heard.

We Had To Tear This ___ Up – This one opens with sound bites from news coverage of the L.A. riots. Then Muggs adheres to Cube’s opening request to “make it rough” and drops a dope backdrop with a deep bass line, and lays down some rugged drums underneath it. Cube’s discusses the injustice that led up to and ultimately got the community fed up enough to start the riots, and he also throws in an occasional “I told you so” for good measure. This one still sounds dope.

Dirty Mack – Cube dedicates this one to all the snitches and haters. Probably my least favorite song on the album.

Don’t Trust ‘Em – Rashad, Ice Cube and DJ Pooh all get co-production credit for the decent instrumental that our host uses to warn brothers that trusting a big butt and a smile can turn into getting jacked.

Gangsta’s Fairytale 2 – The first installment of this song appeared on Amerikka Most Wanted. Over a much slower paced instrumental than the original, Cube picks up where he left off at on the first one, as he puts an urban twist on all your favorite childhood fictional characters (the kid talking at the beginning and end of the song sounds a lot like Riley from The Boondocks, whose voice was done by Regina King). I still chuckle when I hear Cube’s line “what is Mr. Rodgers doing, moved out his Jordan and bought him a Ewing”. Cube’s rhymes are pretty entertaining; and the Cube and Pockets instrumental works well with the song’s concept.

. The . instrumental on the album version is built around a traditional drunken Muggs loop. Speaking of Muggs, it was kind of interesting to hear Cube take a shot at Muggs’ Irish allies House Of Pain, over his instrumental. The single and remix version borrows the instrumental from Grandmaster Flash and the Furious Fives’ “The Message”. Das EFX stops by to add some  ad libs over the hook. The album version is cool, but I prefer the remix.

Who Got The Camera? – 20 plus years later and this song couldn’t be more relevant. On this one Cube gets the Rodney King treatment, and as he gets his ass kicked he asks the crowd of bystanders the question posed in the song title. Sir Jinx gets his first production credit of the evening and he makes it count, hooking up a dope instrumental that has melodic undertones mixed into its rugged exterior. Cube’s rhymes are decent (wait…did he just say ‘badder”?) but Sir Jinx production is the true star of this one.

Say Hi To The Bad Guy – Our host takes more shots at crooked cops on this one, but uses a more playful approach (playful up until he shoots the cop at the end of the song). Sir Jinx gets his second and final production credit of the evening, and it kind of sounds like something Muggs would have created (at least the portion of the instrumental Cube spits his verses over). This wasn’t terrible but definitely one of the weaker songs on the album.

is actually a pretty solid album. But it also marks the beginning of the end of Ice Cube’s reign as the hottest rapper in the game. Overall, the production is quality, and despite his new-found delivery (or deliveries), Cube still had something to say, even if the messages aren’t as potent as they were on his prior projects. But when compared to the intensity, execution and end product of AMW and Death Certificate, The Predator

is a few steps below its predecessors. And as Hollywood continued to pull on Cube’s coat strings, the quality of his music would continue to take steps in the wrong direction.