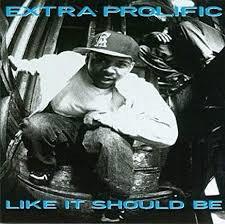 I’ve always seen Extra Prolific as the black sheep of the Hieroglyphics family. Del, Souls of Mischief, and Casual have all seemed to maintain a lasting reverence from their fans or at least a strong cult following. But no one ever seems to mention Extra Prolific. For those who don’t know or simply forgot, Extra Prolific was the two man crew consisting of its front man, Houston born-Oakland transplant, Snupe and Mike G. Through their connection with the Hieroglyphics, the duo were able to snag a deal with Jive where they would release their debut album Like It Should Be in the fourth quarter of ’94.

All of the production work on Like It Should Be would be handled by the Hieroglyphics collective, with Snupe and Mike G handling half and other members from their team handling the other half. Like It Should Be produced a couple of singles, but just like the album, they came and went with little noise or fanfare. Soon after, Mike G would leave the group and Snupe would carrier on the name for a few more years, but never released another Extra Prolific project.

Maybe Mike G was salty because they covered his face with the group’s name on the album cover.

Intro – Extra Prolific kicks off Like It Should Be with a smooth Mike G produced instrumental, while Snupe welcomes the listeners to the album with a few words and a little harmony.

Brown Sugar – This was the album’s lead single. Domino (Hiero’s Domino, not to be confused with the singing rapper Domino) hooks up a funky little diddly for Snupe to rap about a sweet young sister that’s got him wide open. Snupe’s abstract and wordy presentation can make the story line hard to follow, but don’t get it twisted, he can definitely rap.

In Front Of The Kids – In true Hieroglyphic form, Snupe elegantly talks his shit over his own soothing self-produced instrumental. This is dope, and very suitable for midnight marauding, word to A Tribe Called Quest (Tribe Degrees of Separation: check).

Is It Right? –  Snupe hi-lariously starts off the song’s first verse with “misses, tell me what you like, this track is underrated, hated by my man named Mike”. Snupe aint really saying much on this one, but I actually enjoyed the Domino produced track, ecspecially the pimp stroll vibe that the dense bass line gives off.

Sweet Potato Pie – Snupe hooks up a solid backdrop and uses “sweet potato pie” as a metaphor for his sexual exploit of women throughout the song. It’s not a great song, but its quality.

Cash Money – Casual drops in to join his Hiero bredrin, as he and Snupe each spit a quick verse on this song that almost feels like an interlude. Both emcees sound solid on the mic, but the true star of this one is A-Plus’ dope mellow instrumental.

Never Changing – I wasn’t crazy about this one, but I’m a sucka for thick bass lines, and Snupe’s is the audio equivalent of Ashanti.

First Sermon – This was the second single from Like It Should Be and my first introduction to Extra Prolific. Snupe lays down a sick instrumental with an infectious bass line, making random church references over the course of his two verses, hence the song title. Snupe’s instrumental is extremely dope and addictive. And the church said, amen.

Now What – Souls of Mischief’s Opio stops by and drops some bars, sandwiched in between Snupe’s two verses, over a laid back and enjoyable A-Plus produced track.

It’s Alright – Snupe constructs a beautifully smooth instrumental to babble over on this interlude, while the guest female vocalist, Tameka, almost single handedly destroys the soothing backdrop with her terribly out of tune adlibs. She sounds even worst when you listen through headphones.

In 20 Minutes – A-Plus gets his fourth and final production credit of the evening, and while all four are strong, this is my favorite of the quartet.

Go Back To School – Pep Love joins Snupe as they tag team the mic over Snupe’s jazzy  instrumental.

The Fat Outro – Casual gets his only production credit of the evening and turns in a beauty. He builds the mid-tempo backdrop around an ill piano loop that Snupe uses to spit two quick verses, before he gives his shout outs.

The CD format of Like It Should Be includes the following two bonus tracks:

Give It Up – Extra Prolific ends Like It Should Be with a bangin’ backdrop and Snupe rhyming about the same shit he’s been rhyming about pretty much the whole album.

Like It Should Be is a well-produced album by the Hieroglyphic collective, and other than the one track that he produced, I’m still trying to figure out what role Mike G plays in the group. On the other hand, Snupe’s role is very clear, as he proves to be nice with the beats (producing about half of the album’s tracks) and a more than capable emcee, following in the Hiero legacy of elegant rhyming, even if at times he’s a bit too wordy. Sometimes you can have all the right ingredients, but if don’t use the perfect amount of “brown sugar” in the mix, your “sweet potato pie” might taste decent, but may miss that “oomph”. That metaphor sums up Like It Should Be in a nutshell: dope beats and quality rhymes, but it’s missing that it factor, or that “oomph”. Overall Extra Prolific delivers a solid debut album, it’s just not great…like it should be.