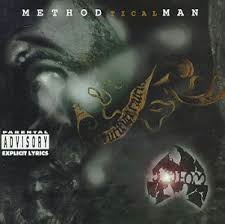 The Wu-Tang Clan took the world by storm in 1993 with the release of their classic debut album Enter The Wu-Tang (36 Chambers) (which also shares the same release date with my second favorite album of all-time, Midnight Marauders…Tribe Degrees of Separation: check). Rza’s dark and grimy Kung-Fu flick influenced production combined with the personalities and unique styles of 9 different emcees made for a nearly flawless and undeniable classic debut album from the Staten Island (aka Shaolin) collective, that would go on to earn a platinum plaque and as of this write up, is more than three times platinum. It was only a matter of time before labels would be looking to sign the standout group members to solo deals. The first to emerge from the pack would be Method Man, who would sign with Def Jam and release his debut album Tical at the close of 1994.

Method would call on Rza to produce the entire album, cause if it ain’t broke don’t fix it. Tical would receive favorable reviews, produce some pretty big singles, one which would win a Grammy (more on that in a bit), and would earn Meth his first solo platinum plaque.

I didn’t care much for Tical when it came out and haven’t really checked for since. Let’s see how it sounds today.

Tical – After a short intro and some signature Wu-Tang Kung-Fu flick vocal snippets, the Rza starts the evening with a dark and moody instrumental. Method Man’s raspy voice and grimy flow match Rza’s gloominess to perfection. This shit is dope and would make for great horror movie music.

Biscuits – Rza’s instrumental sounds very Casio keyboardish, but it may be the dopest Casio keyboard beat every created. Rza lays the melodic chords over rough drums and a wailing female vocal loop, maintaining the dim energy he created on the previous track. This record’s in need of a mean remixing, as Meth’s rhymes are almost drowned out by the music (I love the Bishop from Juice quote in his opening bars), but it’s still sick. This one sounds way better than I remember it sounding back in the day.

Bring The Pain – This was the lead single from Tical. Rza builds the backdrop around a simple drum beat and a soulful moaning male vocal loop and turns it into a banger. Method’s composed and methodic flow is the cherry on top of this yummy dessert: “I came to bring the pain, hardcore from the brain, let’s go inside my astral plane, find out my mental, based on instrumental, records (hey), so I can write monumental, methods, I’m not the King, but niggas is decaf, I stick ’em for the CREAM”. Classic.

All I Need – This was the third single released from Tical. Rza pulls the Casio back out and interpolates a few chords from the classic Marvin Gaye/Tammi Terrell duet “You’re All I Need” and adds some heavy drums and a few cuts to roughing it up a bit. Method Man uses it to rap directly to his lady about his love and appreciation for her: “There are a few things that’s forever, my lady, we can make war or make babies, back when I was nothing, you made a brother feel like he was something, that’s why I’m with you ’til this day boo no frontin’, even when the skies were grey, you would rub me on my back and say “baby it’ll be okay”, and that’s real to a brother like me baby, never ever give my pussy away and keep it tight, alright?” Of course it would be Rza’s “Razor Sharp Mix” remix featuring Mary J Blige that would make the song a hit and earn Mary and Meth a Grammy for Best Rap Performance by a Duo or Group in 1996, as well as propel the single and ultimately the album, to platinum status (side note: there is also a solid Puff Daddy remix, but it has nothing on Rza’s). The remix murders the O.G mix, but the rawness of the original is more cohesive with the rest of Tical.

What The Blood Clot – This is one that I never really got into back in the day. Rza’s instrumental still sounds a little dry, but Meth’s flow makes it sound better than it really is. Plus, its only one verse.

Meth Vs. Chef – Ah, yes. I’ll never forget looking at the track listing on the insert of the cassette version of Tical for the first time back in the day and finding this song listed. Method Man battling Raekwon? Wow! This has to be epic. Well, it wasn’t. Rza’s instrumental is mediocre and so are Meth and Rae’s verses, but if I had to pick a winner I’d go with Meth, mainly due to the fact that Rae stumbles halfway through his verse before regathering himself. Time hasn’t changed my feelings about this one.

Sub Crazy – I love this song title, by the way. Rza’s drum claps and sinister chords have an uncomfortable and urgent feel, which is what I’m sure he was going for. Meth completely annihilates the instrumental with his grimy flow and tough guy shit talk. Dope way to end side 1 of Tical, if you’re listening on cassette.

Release Yo’ Delf – The song opens with Blue Raspberry singing an accapella ghetto interpolation of the first few bars of Gloria Gaynor’s classic “I Will Survive”, which is also this song’s hook. Rza then drops the hard drums and the battle ready horn loop, putting the battery in our host’s back. Speaking of battle, Meth seems to be at war with the music that almost drowns out his raspy vocal, but somehow he prevails and the track winds up victorious.

P.L.O. Style – Meth invites his buddy Carlton Fisk to join him on the mic (not to be confused with the former MLB catcher/Hall of Famer; but it would be pretty funny to hear the O.G. Carlton Fisk grabbing the mic and spittin’ a verse), as the two bounce off each other and actually have good chemistry. Rza’s dusty backdrop has a slight funk feel and sounds way better than I remember it sounding back in the day, and the catchy hook is bound to get stuck in your head after a few listens.

I Get My Thang In Action – Rza keeps its gutter with this grimy track, and Method matches it’s gulliness with his sewer flow. I love the tribalish drums Rza brings in at the end of the song.

Mr. Sandman – This is the only true cipher joint on Tical. Meth, Rza, Inspectah Deck, Street Thug (which might be the most generic rap alias of all time) and Carlton Fisk each spit a verse over a Rza instrumental that is definitely an acquired taste. But the annoying high-pitched female vocal loop on the hook will never sound delicious to these ears.

Stimulation – Here’s another one I slept on back in the day. Rza hooks up an ill Sarah Vaughan loop and makes the melodic sample sound dark and heavenly at the same time.
This shit just gave me goosebumps. Blue Raspberry drops in again to sing the hook and Rza throws in a dope horn loop, which are both nice added touches. Method does his thing on the mic, of course, but Rza’s brilliant backdrop is the star of this one.

Method Man (Remix) – This remix has nothing on the original, but you can definitely hear the growth in Meth’s flow compared to the O.G. version. And his line “you ain’t got no wins in mi casa” would go on to be recycled by several emcees, including some of your favorites (see Big Pun’s “Wrong Ones” and Nas’ “Made You Look”).

When Tical came out back in ’94, I wasn’t a fan. There were a handful of songs I could get with, but I found the majority of Rza’s production dry and bland. Time has definitely been kind to Tical. 25 years later, most of Rza’s dark, dirty and gutter production work sounds great behind Method Man, whose flow and ability to adapt to any beat have always been his strongest attributes, and he sounds comfy and right at home rhyming over them. Tical may not be a classic or stand up to some of the other Wu-Tang member’s solo debuts, but it’s a solid debut from Method Man that has definitely earned my respect.