Keith Murray – The Most Beautifullest Thing In This World (November 8, 1994) 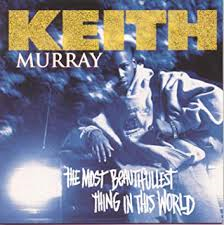 Most people became familiar with Keith Murray from his cameo appearance on Erick Sermon’s 1993 single “Hostile”. Who will ever forget Keith “damaging your medulla, cerebrum and cerebellum, you got a crew you better tell ’em”? That impressive verse, along with his affiliation with Erick Sermon, would help the Long Island emcee get a deal with Jive where he would release his debut album, whose title comes from a line from his “Hostile” verse, The Most Beautifullest Thing In This World.

With the exception of a few songs, Keith would let Erick Sermon produce all of The Most Beautifullest Thing In This World (I’ll only refer to that long ass title as TMBTITW from here on out). The album received favorable reviews and would go on to earn Keith a gold plaque. I haven’t listened to this album in over 20 years, but I don’t remember being crazy about it.

Let’s see if time has been kind to TMBTITW.

Live From New York – This intro features a standard Erick Sermon instrumental that Keith Murray uses to introduce himself and welcomes the listener to the album, in his own unique thugged-out way.

Sychosymatic – Credit the misspelling of “psychosomatic” to Keith Murray. E-Double lays down a raw and dusty boom-bap backdrop that screams East Coast that our host uses to let his ill vocabulary run wild over.

The Most Beautifullest Thing In This World – This was the lead single from TMBTITW. E-Double builds the instrumental around a muted interpolation of The Isley Brothers’ classic “Between The Sheets”. The muted quality gives the backdrop a rough feel, but you can still hear the melodic vibes flowing through it. Speaking of flowing, Keith breezes through E-Double’s smooth instrumental with ease: “For eternity, through infinity, I internally…get in ya”. This one sounds just as good today as it did 25 years ago.

Sychoward – This skit sets up the next song…

Straight Loonie – Erick Sermon and Jamal (formerly one-half of the teen duo, Illegal) join Keith on this cipher joint. All three emcees do their best Onyx impersonation, screaming their way through their verses, and the grimy gimmick fails miserably. E-Double’s stripped down production work sounds empty and boring, adding salt to the open wound.

Get Lifted – What would a nineties hip-hop album be without an ode to weed? Keith checks that box with this one, as he raps praises to the herbal essence over E-Double’s pimp strut inducing backdrop.

How’s That – The Def Squad reunites for this cipher joint. The Green-eyed bandit and Redman join Keith on the mic, as they each spit a verse over a solid Erick Sermon instrumental. It’s not a classic posse cut, but it’s decent, enough.

Take It To The Streets – Keith keeps the cipher joints coming. This time he invites his Legion of Doom bredrin (aka LOD), 50 Grand and Ron Jay, to share the mic. Keith easily out rhymes his buddies (even though Ron Jay’s voice and style sound a lot like Keith’s), but everything about this song is dry and drab. Including Erick Sermon’s instrumental that sounds like a scrapped Rza beat.

Bom Bom Zee – Erick Sermon’s baby mama, Hurricane G joins Keith Murray on this duet, as they each spit a verse, while Paul Hightower sprinkles his vocal flavorings all over the track. I didn’t care much for this one back in the day, but it actually sounds decent 25 years later.

Countdown – Interlude that sets up the next song…

Escapism – On this one Keith spins an out of this world tale…literally. Our host gets so high that he’s transported to Mars where he runs into some aliens, makes one of their brains explode with his “hypercritical form of words”, and finally makes peace (with the peace pipe) with the aliens before returning to planet earth. Yeah, it’s pretty quirky, but I love the weirdness and originality of it. Redman gets his only production credit of the evening and cooks up a solid backdrop, and if you listen to it through quality headphones, you’ll hear some ill chords that you may miss when listening through standard speakers.

The Most Beautifullest Thing In This World (Green-Eyed Remix) – This extremely dry and dull remix strips every drop of life and energy out of the original version. There is absolutely no reason to listen to this one more than once.

Keith Murray is definitely one of the more colorful lyricist in hip-hop history. The self-proclaimed “lyric lunatic” shows off his radiant “vocabulation” throughout The Most Beautifulest Thing In This World. I’ve mentioned several times in the past that I’m not crazy about most of Erick Sermon’s solo production work, but he actually does a decent job on this album. Most of E-Double’s backdrops work as solid canvases for Keith’s raspy vocal and animated rhymes. There are a few duds and a few great moments, but most of TMBTITW falls somewhere in between the two, ultimately rendering Keith Murray’s debut a decent album, but easily forgotten in a year stacked with superior records.

2 Responses to Keith Murray – The Most Beautifullest Thing In This World (November 8, 1994)