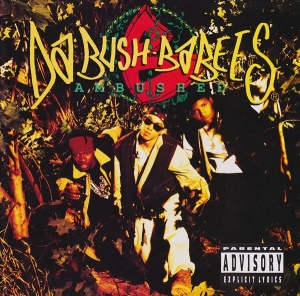 Da Bush Babees are definitely one of the more obscure groups in hip-hop history. I don’t know a whole lot about them, and there really isn’t a ton of information about the group on the web, either. I do know that the Brooklyn based trio of Mr. Man, Bae-B-Face Kaos and the Raggamuffin Rudeboy, Y-Tee once upon a time in the nineties released 2 albums. The last one, Gravity, in 1996, and their 1994 debut album Ambushed, which happens to be the subject of today’s post.

Legend has it that the original version of Ambushed was scrapped after it sat for 6 months to year after it was recorded. Once Da Bush Babees got their label issues straighten out, they decided to fine tune the album, as they felt so much time had passed that most of the material sounded dated. I’m not sure what songs from the original version of Ambushed made the final cut or which songs were added, but I’m sure there’s a copy of the O.G. version floating around somewhere. Ambushed produced a few singles that made some minor noise, but the album didn’t sell well and received very little fanfare upon its release.

I haven’t listened to Ambushed in its entirety since it came out back in ’94, and other than the lead single (which was the sole reason I bought the album), I don’t remember much about the album. And that normally doesn’t bode well on this blog.

Intro – Ambushed opens with this short intro of babies crying in the jungle, thus introducing the listeners to Da Bush Babees.

Pon De Attack – Right out the gate Mr. Man and Bae-B-Face Kaos come out screaming over a decent J.P. instrumental and sound like a cross between Onyx and Pharcyde, circa the Bizarre Ride era. Y-Tee even screams his chants, making it twice as hard to understand what the hell he’s saying.

Put It Down – Jermaine Dupri gets his first production credit of the evening on this one. Y-Tee sounds nice chanting over the solid instrumental, but Mr. Man and Kaos’ gimmicky screaming is giving me a headache two songs into the album.

Original – Mark Batson slides the trio a slick reggae-tinged groove to rock over. Of course, Y-Tee sounds right at home chanting over it, and Mr. Man and Kaos even sound pretty nice spittin’ on it. Well done, fellas.

Ruff N’ Rugged – I like the jazzy vibes in Nikke Nikole’s instrumental, and Y-Tee’s reggae flavored hook is a nice added touch. Kaos and Mr. Man deliver some clever punch lines and manage to keep the yelling to a reasonable level.

On Da Radio – This might be the shortest interlude/skit in the history of hip-hop.

Just Can’t Stand It – Mr. Man sits this one out and lets Kaos and Y-Tee hold it down. Kaos shows and proves he can spit substance, as he delivers two solid verses about the mistreatment of the black man in America: “So they shot Martin Luther King, beat Rodney King, I used to be a king, now I work at Burger King”. I have no idea what Y-Tee is chanting about, but the true star of this song is Salaam Remi’s creamy instrumental.

Da Ignorant No It All – Kaos invites his friend Mellow E aka Da Ignorant No It All, to join him on this one. Kaos spits a few bars then gets out the way for his guest to spit a verse over a solid instrumental that sounds like something JD may have created (the liner notes don’t list credits for this song). I wasn’t crazy about the verse, but it wasn’t terrible.

Hit ‘Em Up – Da Bush Babees invite their buddy, II Unorthodox to join them on this one, as they give us their version of horrorcore and it comes off very gimmicky and contrived. Nikke Nikole’s dark instrumental is dope, but this farce sounds way too forced.

We Run Things (It’s Like Dat) – This was the first single released from Ambushed and the only song I remember from the album. Ali Shaheed Muhammad slides the trio a slick instrumental (Tribe Degrees of Separation: check) and Mr. Man and Kaos actually do it justice. When the two emcees tone down their delivery and just rhyme, they prove to be a formidable duo on the mic. I wasn’t feeling Y-Tee’s verse, but he still doesn’t mess up this groove.

Get On Down – JD gets his second and final production credit on Ambushed, and he turns in a decent instrumental. Da Bush Babees don’t really have much to say on it, just more unwarranted high volume party rhymes.

Remember We – I believe this was the second single from Ambushed. Da Bush Babees reminisce on the time before they had a record deal. Kaos and Mr. Man calm down a bit and sound nice flowing in pocket over J.P.’s funky mid-tempo groove (the production credit goes to J.P. but it’s the live piano and bass play, brought you courtesy of Leo Colon, that puts the funk in the groove). Y-Tee is left to hold down hook duties on this one, and it works out well, as he delivers a catchy refrain.

Clear My Throat – J.P. slides DBB a nasty backdrop with a clever Big Daddy Kane vocal sample on the hook. Y-Tee sits this out and lets Mr. Man and Kaos do their thing. This is one of the few times on Ambushed that the duo’s over the top energy matches up nicely with the production.

Ya Mammy – One last useless skit.

Swing It (Jazziness) – The final song of the evening finds the trio continuing in their screaming ways. J.P.’s up tempo jazzy instrumental is pretty dope, but the over the top yelling is just too much to swallow.

For most of Ambushed Da Bush Babees sound like Gilbert Godfrey over hip-hop beats. Well, at least Kaos and Mr. Man do. Y-Tee’s reggae styling sounds out of place for much of the album when paired with his screaming comrades. The production (which features work from some well-respected producers) is pretty solid throughout the album, but it’s, um, ambushed by the trio’s screaming and lack of substance, which leaves the project sounding like one loud freestyle littered with a misplaced reggae nigga.

On “Original”, Bae-B-Face Kaos says, if Da Bush Babees don’t blow up then their record label failed them. Maybe you can place blame on Reprise for the promotion of Ambushed, but the group has to assume responsibility for the album’s mishaps.