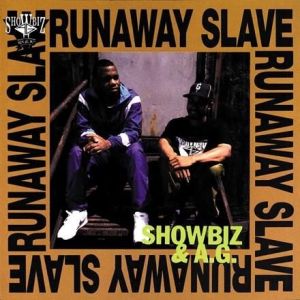 After making several references to Showbiz and the Diggin’ In The Crates crew in the past few posts, it struck me that I missed one of the foundational pieces in the D.I.T.C. catalog, Runaway Slave. Enjoy the read.

Diggin’ In The Crates, also known as D.I.T.C. is an unsung hip-hop crew that should be, but rarely is, mentioned in the same breath as The Juice Crew and The Native Tongue. In the early to mid-nineties the eight man collective of Diamond D, Lord Finesse, Fat Joe, Big L, O.C., Buckwild and the two man duo and subject of today’s post, Showbiz and A.G, helped form the sound of East Coast hip-hop, with boom-bap drums, jazzy loops and braggadocios rhymes mixed with witty punchlines.

Showbiz, Diamond D and Lord Finesse all group up together in The Bronx, and hip-hop would bring them together as the threesome would soon forge the sound for D.I.T.C. and several other artist through the years. Diamond D would be the first out of the crew to officially release music, as one-half of the short-lived duo Ultimate Force, who released one 12 inch single on Strong City Records in 1989. Finesse would be the first to release a full album, dropping his first joint with DJ Mike Smooth, Funky Technician in 1990 on Wild Pitch, and his sophomore effort Return Of The Funky Man in February of 1992 on Giant/Reprise. Less than two months after the release of Return Of The Funky Man, Showbiz & A.G. would release their debut EP Soul Clap, (which would also feature the posse cut “Diggin’ In The Crates” marking the first time the term was used for the Bronx crew). At the end of 1992 DITC would make an even bigger impression as Diamond D would release his classic debut Stunt, Blunts & Hip-Hop and Showbiz & AG would drop their highly coveted full-length, Runaway Slave.

Showbiz would produce the entirety of Runaway Slave with a few co-production credits going to Diamond D, while most of the D.I.T.C. crew would make a cameo appearance on the album with a verse or by giving a shout out on an interlude. The album didn’t earn the duo any plaques, but it definitely received heaps of critical acclaim, and many consider it to be a classic.

It’s been a while since I listened to Runaway Slave. Let’s revisit it and see if it’s worthy of classic status.

Still Diggin’ – The first song of the evening finds Showbiz and Diamond D sharing the microphone over a simple drum beat and a couple of dope horn loops. It was kind of weird not to hear A.G. rhyming on this opening track, considering he’s the main emcee in the group and all. But it still ends up being a decent song and a nice warm up for the rest of the show. Side note: Showbiz shouts out A Tribe Called Quest at the end of the song, so you can check off “Tribe Degrees of Separation” for this post.

Fat Pockets – This was the second single released from Runaway Slave. Showbiz hooks up a smooth funked-out guitar loop and sprinkles a high energy horn sample over his rough drums. He also bugs out on his last verse as he spits:”I’m hungry enough to grow fangs, here’s a dollar go to the store, but bring me back my fuckin’ change”. And “gettin'” head on the escalator” is mad wild. The single/video version uses a different dope high energy backdrop, but I prefer this smoother mix.

Bounce Ta This – This was the lead single from Runaway Slave. Dres from Black Sheep stops by to spit a verse next to A.G. over a super generic Showbiz backdrop. A.G. sounds better than his guest on this one, but the song still sounds corny as hell to me.

More Than One Way Out Of The Ghetto – This one starts with a short interlude that features Showbiz and his homey, Lou Dog talking over the same instrumental that UTD rhymed over on “Moon In Cancer”. Then Show drops a somber horn loop before the drums drop and a few ill piano stabs come in for A.G. to discuss his short stent as a drug dealer until he got caught, did a short bid, got out decided to rap his way out of the ghetto. Solid song, great message.

Silence Of The Lambs (Remix) – After Kid Capri stops by and gives a quick shout out to our hosts over a smooth organ loop, Showbiz drops an enormous jazzy horn loop that ends up being the highlight of the song. The rest of the instrumental is flat and I wasn’t impressed by A.G. or Showbiz’ rhymes.

40 Acres And My Props – Show and Andre use this one to demand their props from the streets and papers from the record companies. This might be the only time Showbiz out rhymed AG on a track. But the true star of this one is Showbiz’ brilliant jazzy backdrop.

Runaway Slave – The title track finds A.G. addressing the issues and traps that black men are forced to deal with living in the hood, and the importance of forming a “runaway slave mentality” to escape and overcome the snares laid before them. Show provides dope drums and a few ill horn loops that compliment Andre’s conscious rhymes, perfectly.

Hard To Kill – Easily the most successful and well-known member of DITC, Fat Joe stops by to give Show and Dre some love at the start of this one. Then A.G. gives us a dosage of “mental slavery”, as he goes on a killing spree through his two verses, before telling the listener in the song’s last few bars that he did this song just to prove that he’s versatile. I didn’t care much for A.G.’s rhymes or for Showbiz and Diamond D’s instrumental.

Hold Ya Head – Show lays a beautiful somber instrumental for he and A.G. to rap over, as they encourage the listener to hold their head and push through whatever life throws your way. This one still sounds great after all these years.

He Say, She Say – On this one A.G.’s addressing some of the dangers that can come with rumors and gossip. Cool concept (and I like the Greg Nice vocal sample on the hook), but the lyrics were boring and the instrumental was trash.

Represent – Lord Finesse, DeShawn and Big L join A.G. on this cipher joint. Showbiz provides a solid instrumental and all the guests rap circles around their host. This is definitely an underrated/underappreciated posse cut.

Silence Of The Lambs – I like this instrumental more than the remix.

Party Groove (Bass Mix) – I guess this was Showbiz and A.G.’s attempt at a club joint. Showbiz lays down an up-tempo backdrop and sprinkles a melodic loop over it. The duo’s lyrics are pretty generic and the instrumental is kind of cheesy, but I still found it mildly enjoyable.

Soul Clap (Short Version) – This was the song that would introduce Showbiz & A.G. to the world. Show and Diamond D build the dope backdrop around a few loops borrowed from Fred Wesley and The J.B.’s “Doing It To Death”and turn it into a nasty instrumental for A.G. to spit over, and he sounds comfortable and confident in the process. I would definitely give this record a classic status.

Catchin’ Wreck – Show and A.G. take turns talkin’ their shit over another dope Showbiz instrumental. I love the flute loop Show sprinkles throughout the song.

Party Groove Instrumental – Showbiz adds a few bells (a Kid Capri vocal loop) and removes a few whistles (the melodic sample) from the “Bass Mix”. Other than that, it plays as it reads.

I’ve never felt that Showbiz deserved to be put on the same level as a Premo, Pete Rock or Large Professor. He definitely has created some certified bangers and dope records, but he’s always seemed a bit inconsistent through the years. After revisiting Runaway Slave these past few weeks I was reminded why some people elevate him to that top-tier hip-hop producer level, as he strings together a batch of dope boom-bap instrumentals built heavily around slick jazzy horn and piano loops that helped define early to mid-nineties East Coast hip-hop. And while no one will argue that A.G. deserves to be on the GOAT list, he does a solid job of mastering the ceremony with his simplistic flow throughout. Runaway Slave is not a flawless effort, but it’s a great full-length debut from the Bronx-based duo.