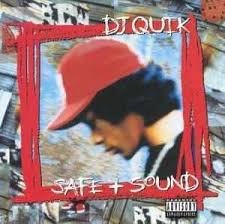 By 1995 DJ Quik was a well-respected hip-hop artist with two gold selling albums under his belt. His crispy clean brand of G-funk production, along with his distinctive ability to pick the right funk and soul loops helped him to create two nearly sonically flawless albums with his first two releases. He would pick up where he left off at in 1995 with his third release, Safe + Sound.

On Safe + Sound Quik would continue to produce his own songs and bring in true musicians to help craft and bring his musical ideas to life. And based on the album cover and artwork in the liner notes, he would also begin to embrace and be more vocal about his affiliation with the Tree Top Piru Blood set. It’s possible that this vocalization was influenced by his affiliation with Suge Knight, who was also a Blood and received an EP credit for the album. Safe + Sound would go on to earn DJ Quik his third consecutive gold plaque and cement him as a legitimate force to be reckoned with behind the boards.

Other than the album cover, I don’t remember much about Safe + Sound. I’m sure I bought it when it came out (and re-bought it later on), but I can’t recall any of the album cuts, yet alone the singles. Hopefully that’s not a bad indication of what’s to come.

Street Level Entrance – Safe + Sound opens with Quik sharing a short poem about his attitude and a list of the things he cares about. Then he drops a mid-tempo funk groove and shouts out his hood and homeboys and gives a brief history of his stint in this here rap game. And of course he had to give the middle finger to MC Eiht.

Get At Me – Quik builds this ill funk backdrop around a Cameo loop and uses it to call out the Judases in his life, including a subliminal for his ex-crew member, AMG during the song’s first verse. This was pretty dope.

Diggin’ U Out – After a short vocal snippet taken from the classic Harlem Nights (one of my favorite movies, by the way), Quik and a young Warryn “The Boy Wonder” Campbell (who would go on to work with everybody from Mary Mary to Kanye West) on electric piano lay out a smooth funk groove that Quik uses to tackle one of his favorite topics: sex.

Safe + Sound – The title song starts with another Harlem Nights snippet and finds Quik and company hooking up another slick instrumental, as our host gives us a brief history of the hood upbringing that made him develop his love for money. Quik sounds nice, the hook is catchy and the laidback funk groove is infectious.

Somethin’ 4 The Mood – If you ever wanted to spend the day in the life of DJ Quik, this is the song for you. Quik and the crew hook up a breezy feel good instrumental (which is why I chuckle when I hear Quik call himself the “one man band” on the song’s final verse), complete with one of illest flute solos (courtesy of Robert “Fonksta” Bacon) at the end of the song.

Don’t You Eat It! – Intro that sets up the next song…

Itz Your Fantasy – This is strictly for the grown, sexy and freaky. Quik and his team put together a silky smooth instrumental that Quik uses to get super detailed and blunt about a sexapade with a young lady (I chuckle every time I hear him tell her to “get ready for a toss and some dick sauce”). This is was you get when raunchy and sophistication meet in the middle.

Dollaz + Sense – This song was originally released on the Murder Was The Case Soundtrack in ’94. Quik cooks up a cool mid-tempo track that sounds like a mid-nineties club joint, but instead of making people dance, Quik uses it to fire more shots at his Compton arch nemesis, MC Eiht. He lands a few nice blows (i.e. “Givin’ your set a bad name, with your misspelled name, E-I-H-T, now should I continue? You left out the “G” cause the G aint in you”), and even though I knew that Quik claimed a Blood set, I never put two and two together as to why he spelled “Quik” without a “C” until recently listening to this song (“There’s only one DJ Q-U-I-K, with no “C” , still you can’t be me”). Not a great dis record, but I’ve heard worst.

Let You Havit – Quik’s in gangsta mode on this one, sending out threats, including more bars aimed at Eiht. He also discusses the misunderstanding that led to the feud between the two in the first place. Quik sounds nice rhyming over the funk groove that makes for great roller skating music.

Summer Breeze – I wasn’t crazy about this one, but it’s a decent joint that lives up to its name.

Quik’s Groove III – For the third installment of “Quik’s Groove” our host invites Robert Bacon (on bass and guitar), Warryn Campbell (on piano) and Charles “Chaz” Greene (on flute) to create a beautifully smooth instrumental. Part 1 is still my favorite, though.

Sucka Free – Quik lays a decent instrumental for his homie, Playa Hamm (one-half of the Penthouse Players Clique) to spit one quick verse on this makeshift interlude. It wasn’t terrible, but it doesn’t have much replay value either.

Keep Tha “P” In It – Quik and the band hook up a jazz-flavored G/P funk concoction, as our host invites Playa Hamm, 2-Tone, Kam, Hi-C and 2nd II None to join him on this family affair. Everyone holds their own, but the music is the true star of this one.

Hoorah 4 Tha Funk (Reprise) – Quik brings back the Funk instrumental from the intro and gives a few closing words and shout outs.

Tanqueray – This is a hidden bonus track. Over a very generic instrumental, Quik relives a party at his house where Tanqueray had everybody wilin’, including our host himself, who claims it moved him to spit and hit a chick in the mouth for saying “rappers ain’t shit”. I sure hope this story is all made up and not true. Good thing this was a hidden track, because there’s not much to see here.

Quik stays true blue (or should I say true red?) to his crispy clean brand of P-funk production on Safe + Sound, as he and his band of musicians build even more layered and musically dense instrumentals than his previous projects. Quik will never find his name on anyone’s top 20 emcee list, as his content is limited and a bit juvenile, but his slightly nasal vocal tone and solid flow sound nice over his well-crafted backdrops. I personally wouldn’t call Safe + Sound a classic, but I wouldn’t argue with you if you did.