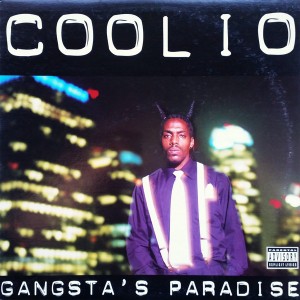 The commercial success of Coolio’s debut album, Fantastic Voyage, turned the Compton rapper into a pop sensation, seemingly overnight (although those in the know new about the dues he paid on the underground scene, grinding with WC & The Maad Circle before reaching the proverbial mountain top). Thanks to the lighthearted content of the title track and lead single (and his cartoonish braids), it would earn Coolio a platinum plaque and also help thrust the album to platinum status, while receiving positive reviews from the critics as well (you can read my thoughts on the album by clicking here). Little did the world know (or Coolio) that he was only getting started. Coolio would return the following year with his sophomore effort, Gangsta’s Paradise.

Gangsta’s Paradise would be the second of three albums that Coolio would release during his tenure with Tommy Boy Records. Like Fantastic Voyage, Coolio would use the production by committee formula, which would include beats from some familiar names (like Dobbs The Wino, whose alias I absolutely adore) and a heapin’ helpin’ of production from some new names as well. Thanks largely to the monster title track and lead single, Gangsta’s Paradise would go on to be an even bigger commercial success than its predecessor, selling more than two million units in the states, and the smash hit lead single and title track would earn Coolio a Grammy win for Best Rap Solo Performance in 1996. But more importantly, it received positive reviews from pretty much all the major publications.

I’ll be honest. I loved Coolio during his short stent with WC & The Maad Circle, but felt he had gone too far left when he found pop success with his solo career, so I stopped checking for him. A few years back I found used cd copies of all three of his Tommy Boy releases in the dollar bin, so I figured I give them (and him) a chance, a few decades after their release.

That’s How It Is – A short intro that finds Coolio and his homie, Talkbox choppin’ it up about their love/hate relationship with the hood (even without trying, Coolio’s comments on this one crack me up), which sets up the next song…

Geto Highlites – Christopher Hamabe and Devon Davis get the production credit on this one and synth the shit out of the Isley Brothers’ “Groove With You” that Coolio uses to highlight the happenings in the hood; it’s kind of like a hood version of those Christmas letters that white people send out to their family and friends. Coolio’s rhymes teeter between comical and sad (sometimes in the same bar), and though they are compelling, the delivery of them (and the hook) sound kind of sloppy and rushed, which is probably because Ras Kass (who is a great lyricist in his own right and credited in the liner notes as a writer on this song) wrote them in his own rapping cadence, which doesn’t suit Coolio very well. Even with all its flaws, this is still a decent song.

Gangsta’s Paradise – If “Fantastic Voyage” made Coolio a star, this song thrust him into superstardom. It was first released earlier in ’95 as the lead single for the Dangerous Minds Soundtrack (and LV, who sings the hook, would also try to cash in on it by putting it on his debut solo album the following year, but unfortunately it didn’t pay off for the chubby crooner). Doug Rasheed liberally borrows from Steve Wonder’s “Pastime Paradise” and puts a gangsta twist on it, as Coolio attempts to take the listener on a journey down the dark and hopeless path traveled by a young black man caught up in the street life, and he does a convincing job (which I’m sure wasn’t difficult, since Coolio is on record (literally and figuratively) for being gang-affiliated). This classic record is easily one of the biggest hits in hip-hop history and it still sounds great today.

Too Hot -This was the second single from Gangsta’s Paradise. Dobbs The Wino gets his first production credit of the evening, and not only does he borrow the music from Kool & The Gang’s song with the same title, but Coolio brings in the band’s former lead man, JT Taylor to sing the hook for this PSA on safe sex. Now that’s gangsta. Coolio does a great job of driving home his message without sounding preachy, and even though the instrumental isn’t super innovative, I still enjoyed it.

Cruisin’ – Coolio and his guest, Malika do a hip-hop remake of Smokey Robinson’s classic record, as they smoke, drink and fuck, all while cruising through the city streets listening to music. Shaunna D sings the hook and her mediocre rendition doesn’t hold a candle to Smokey’s silky falsetto, but whatever. This was okay, but if it suddenly disappeared from my copy of Gangsta’s Paradise, I wouldn’t miss it; but it would scare the shit out of me.

Exercise Yo’ Game – First cipher of the evening: Coolio is joined by E40 (excuse my chuckle, but whenever I hear his name I think about a hi-larious meme I saw calling him the “most love and respected shitty rapper of all time”), Kam (who turns in the strongest verse during this session) and 40 Thevz, as they take turns stressing the importance of making and stacking your money by any means necessary. I didn’t like the Jay Supreme/DJ Moe instrumental the first few times I listened to it, but it’s slowly growing on me.

Sumpin’ New – This was the third and final single from Gangsta’s Paradise, and it reeks of an intentional crossover attempt that apes “Fantastic Voyage” (so much so that Coolio felt compelled to clarify in the song’s first few bars that “this aint a fantastic voyage”). The song would be nowhere near as commercially successful as the former and adds nothing meaningful to the album.

Smilin’ – Dominic “Romeo” Aldridge, Jammin’ James Carter and Reece Carter are credited with the production credit, as they turn a dope Sly & The Family Stone loop (that QDIII cleverly flipped a few years prior for Justin Warfield’s forgotten classic record, “Season Of The Vic”) into a creamy backdrop that Coolio uses to give a funny and heartfelt dedication to his kids. Someone going by Baby G (who sounds a lot like Bilal) sings the fresh hook and this ends up being a feel good joint that’ll leave you feeling warm and fuzzy inside.

Fucc Coolio – Short interlude to set up the next song…

Kinda High Kinda Drunk – Coolio uses the playful backdrop to share an animated tale about meeting up with his homies at a bar, and things get kind of interesting as he drinks, and drinks and patiently awaits their arrival. These are the type of songs that Coolio really shines on, and he doesn’t fail on this one, either.

For My Sistas – Oji Pierce builds the backdrop around an interpolation of an Isley Brothers’ snippet, setting the inspirational mood for our host to pay homage to all the Nubian Queens out there. It was honorable to hear Coolio acknowledge his past transgressions of calling black women “bitches” on records (ironically, later in the album there’s a skit that has a dude calling a sista a “bitch” before shooting her), but something about this song feels contrived.

Is This Me? – Devon Davis, along with Frank “Spade” Cannon on keys and Charles “Charlie Macc” Anderson on bass guitar, lay down a serious smooth groove that Coolio and his guest, Rated R from Thug Life, use to detail their struggle to walk the straight and narrow, while the streets keep calling them back like the crack called Pookie (continue to rest easy, Biggie). I would have loved to hear a Pac verse instead of Rated R on this one (I’m sure Coolio would have too, but he was probably busy serving his sexual assault sentence at the time), but regardless, Coolio’s engaging bars, along with LV’s heartfelt hook sound great over the dope instrumentation.

A Thing Goin’ On – Coolio and Oji Pierce decide to re-work Billy Paul’s classic record, “Me and Mrs. Jones”, as our host raps about him and his mistress’ forbidden relationship (Jeremy Monroe sings the hook, while Stan The Guitar Man adds lovely guitar licks). I can understand if you think this song is corny, but I actually enjoyed Coolio’s re-interpretation of this timeless record.

Bright As The Sun – Oji Pierce creates a bluesy synth backdrop that Coolio uses to issue a warning about the consequences that come with playing with fire in these ghetto streets. Will Wheaton (who sounds almost identical to LV) adds a bluesy hook that makes Coolio’s content resonate even more. This is another one that a Pac cameo would have sounded great on, but as is, it’s still dope.

The Revolution – This may be the most militant we ever hear Coolio get on a record (Disclaimer: I’ve never heard the rest of his catalog after this album, so that’s a huge assumption I’m making). Over a bouncy Dobbs The Wino beat, our host is looking to spark the revolution on wax…kind of. Coolio’s verses don’t match the militancy of the hook, but I still enjoyed this one.

Get Up Get Down -Over a solid Dobbs The Wino produced backdrop (that features more guitar and bass play from the legendary Stan “The Guitar Man”), Coolio gets one last cipher session going, as he invites Malika, Leek Ratt, PS, Shorty, Ras Kass and his old partner in rhyme, WC to join him on this one. For the most part, everybody involved holds their own, while Ras Kass makes an impressive first impression with his intricate wordplay and metaphors; and it’s always nice to hear Coolio and Dub-C on wax together.

It’s hard not to like a rapper like Coolio. He rhymes with a charisma and clarity that makes him easy to understand and relate to, and even though he’s not the strongest or most talented lyricist, his bars usually resonate with the listener, and more often than not, they entertain. On Gangsta’s Paradise, Coolio checks all those boxes and keeps the listener engaged throughout the album’s seventeen tracks. Gangsta’s Paradise doesn’t have any real cohesion and sounds like a bunch of songs thrown together (which is, at least partially, due to all the different hands in the production pot), but most of the songs work in their grand randomness. Gangsta’s Paradise is a solid follow-up to Fantastic Voyage, and a great return on my dollar investment.