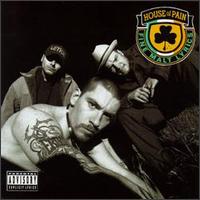 New York native and California transplant, Erick “Everlast” Schrody came on the scene in the late eighties under the tutelage of Ice-T, as part of his Syndicate Posse. In 1990 he would release his debut solo album Forever Lasting on Warner Bros. As was made evident by the black suit with white tennis shoes that he donned in the videos for “I Got The Knack” and “The Rhythm”, young Erick wasn’t sure which way he wanted to go. Struggling to find his own voice and lane, the album failed both commercially and critically.

Everlast would regroup, literally. He traded in his suit for a Larry Bird jersey, flannel and jeans, chopped his big hair down to a low Caesar and recruited DJ Lethal (whom he worked with on Forever Lasting) and sideman Danny Boy, to form the House of Pain. The trio would release their self titled debut album on Tommy Boy in the summer of ’92.

DJ Lethal and DJ Muggs (of Cypress Hill) would handle the core of the production, creating a harder sound for House of Pain than what Everlast fans were accustom to. Everlast would also experiment with a new style, adopting a phony Irish accented delivery and a new-found admiration for all things Irish. On the success of their smash hit lead single (that we’ll get to shortly) House of Pain

would earn the trio a platinum plague in less than 5 months of its release.

House of Pain would release two more albums as a group with mild success, before Everlast would yet again reinvent himself, this time re-emerging as Whitey Ford, the acoustic guitar playing blues/rock singer. This would also be a successful venture for Everlast, as he would release several albums, selling millions of units (with the first two going double platinum and gold) and he continues to record music and tour to this day.

Salutations –  DJ’s Lethal and Muggs join forces and hook up a slightly dark but completely sick intro instrumental that Everlast uses to scream “House Of Pain” over, repeatedly.

Jump Around – If you’re not familiar with this song you really should consider moving from the rock in which you live under. This is the gold selling lead single that will always define House Of Pain’s career. Muggs hooks up an instrumental that is the perfect stereotypical example of what an Irish hip-hop group should rap over, and that’s not a dis. The instrumental is dope, so much so that you won’t even mind Everlast spitting his tough guy talk in his exaggerated Irish accent. A fun song that I’m sure will always be in someone rotations, at a party, club, or radio station near you.

Put Your Head Out – Muggs hooks up a blunted instrumental that sounds like something Cypress Hill would spit over, so it makes perfect sense that B-Real joins Everlast on this one, as they each spit violent threats to anybody within earshot. This was solid.

Top O’ The Morning To Ya – Perfect song title for an Irish rap group. Lethal hooks up an instrumental that slightly sounds like it’s trying to ape “Jump Around”, and the third member of the group, Danny Boy, makes his first appearance of the evening, joining Everlast on the mic. All in all, this was cool.

House And The Rising Sun – Son Doobie of FunkDoobiest (who sounds like a poor man’s Krazy Drayz of Das EFX, minus the stuttering) joins Everlast on this duet, and neither spit anything with any lasting value. Lethal’s drunken instrumental was kind of cool, though.

Shamrocks And Shenanigans – Danny Boy returns, joining Everlast on the mic over a decent DJ Lethal production. The hook is cheesy and gimmicky but the song is not completely garbage. This was okay.

House Of Pain Anthem – Lethal brings the bpms down quite a bit for this tortoise paced instrumental that has a dark and eerie feel to it, as Everlast and Danny Boy talk more of their Irish tough guy shit. Lethal’s instrumental is dope.

Danny Boy, Danny Boy – Just like that we go from tortoise like tempo to hare like speed, as Muggs uncharacteristically, provides a super up tempo beat for Everlast and Danny to rap over. I didn’t really care much for this one.

Guess Who’s Back – Muggs’ soulful dusty and blunted instrumental sounds a lot like Yo-Yo’s “It’s A Long Way Home” (from Black Pearl), which should come as no surprise, considering he produced both songs (and for the record, the samples are from two different, um, records [“Guess Who’s Back” samples Albert King’s “Cold Feet” and “Long Way Home” uses an Otis Redding loop]). Everlast asks the rhetorical question on the hook and uses his verses to share more of his new-found Irish pride.

Put On Your Shit Kickers – This is garbage, and the hook is shit, no pun intended.

Come And Get Some Of This – Muggs and Ralph the Funky Mexican (from FunkDoobiest) get the co-production credit on this one. The sample reminds me of “Pigs” from Cypress Hill’s debut. Not completely terrible, but you’ll forget everything about this song as soon as it ends.

Life Goes On – Ralph The Funky Mexican gets the production credit for this mediocre instrumental, as Everlast raps about the same things he’s rapped about for the previous 13 songs.

One For the Road – Muggs and Lethal come together again and concoct this slow tempo blunted instrumental. It’s not terrible but it’s not nearly as nice as what they did on the intro. Oh yeah, and Everlast spits more of the same old same old.

Feel It – See comments from “Life Goes On”.

All My Love – Everlast kicks a quick verse, before giving his shoutouts over a mediocre DJ Lethal instrumental.

(well, sort of: it’s not listed in the liner notes but it is listed on cd). Pete Rock (who by this time was quickly becoming the go to man for hip-hop remixes) hooks up a pretty dope instrumental for the remix, even adding his own verse. Solid, but I still prefer the original.

Everlast is far from a great emcee but he’s serviceable, and his dope voice makes up for his simple rhyme schemes and put on Irish accent. His content never goes beyond violent threats, boasts, bangin’ broads and endorsing Mickeys and Guinness, but when you factor in his rhyming partner Danny Boy is pretty much a fixture in the group (for whom I’m pretty sure Everlast penned the limited rhymes he does spit), he does a decent job of carrying the lyrical load on House of Pain

. As far as the production, Muggs, DJ Lethal and Ralph the Funky Mexican create a cohesive Irish blunted sound scape for House of Pain. Even with the decent emceeing from Everlast and the cohesive production, four or five songs should have been left off the final cut of House of Pain

. As is, Everlast’s rhymes start to sounds redundant by the midway point and the production on the second half of the album goes from sounding cohesive to down right repetitive.