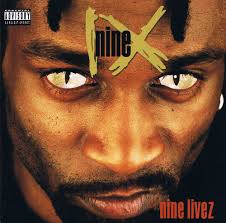 Derrick Keyes, better known to the world as Nine, was a Bronx born and bred emcee who begin rapping and making records back in the mid-eighties. Under the alias of Ricochet, he was a part of a few short-lived groups that released some singles all produced by the legendary New York radio personality and Deejay, DJ Chuck Chillout. In 1986, Nine (who was going under the alias of 9 Double M) would link up with Funkmaster Flex, as the two were both part of a group called Deuces Wild. As a duo they would release an EP (more like a maxi-single) titled F.A.L.L.I.N. (And Ya’ Can’t Get Up) on Warlock Records in 1991. The project didn’t make much noise, but in ’93 Flex would release the single “Six Million Ways To Die” on Wreck Records, which featured bars from 9 Double M. The song created enough buzz to get 9 Double M a deal with Profile, where he would drop the “Double M” and simple go by Nine (because of his shoe size, lucky number and birth date: 9/19/69) and release his debut album, Nine Livez.

Nine would call on Rob Lewis (who he met and worked with during his Deuces Wild days) to produce the majority of Nine Livez with Tony Stoute producing the remainder of the album. Nine Livez wasn’t a commercial success, but the lead single “Whutcha Want?” made enough noise to convince Profile to give him a follow-up album, that we’ll discuss sometime in the not so near future.

I haven’t listened to Nine Livez in a long while, but I remember loving this album back in ’95. Let’s see if time…has been kind…to Nine. Bars, yo!

Intro (Death Of A Demo) – Nine Livez opens with snippets from Nine’s demo tape, before an unimpressed A&R or record exec asks “do ya’ll got anything else?” (I personally thought they all sounded fire, but whatever). Things get kind of confusion after that, as it sounds like Nine dies and then he’s reborn through a record deal?? This intro then bleeds into the next song…

Redrum – Stoute brings the energy down a bit from the previous track with this laidback instrumental built around a few sick out of key piano loops. Nine uses the ill backdrop to talk about murder (If you haven’t seen the movie The Shining, “redrum” is “murder” spelled backwards) and some of the things that lead people to commit murder as well. This was nice, and Nine’s harmonized growl on the hook is the cherry on top of this audio treat.

Da Fundamentalz – Nine starts this song off with one of the dopest opening lines in hip-hop history: “I waste emcees like time, the one and only incredible, original, Nine”. Our host’s bars only get stronger as the song goes on, as he obliterates Rob Lewis’ fire instrumental. This sounds as great today as it did 25 years ago.

Hit Em Like Dis – This might be the only questionable moment on Nine Livez. Our host pairs up his grimy growl with his alter-ego, Froggy Frog, who embarrassingly “ribbits” after each of his lines on this duet. I’m not sure why his boys didn’t tell him this gimmick was a bad idea, but hey… at least the instrumental is dope.

Who U Won Test – And right back to our regularly scheduled program. RL lays down a  banger for our host to devour like a lion pouncing on his prey. Then he walks away with the instrumental’s blood still dripping from his lips.

Whutcha Want? – This was the lead single from Nine Livez. RL hip-hops a few symphonic loops and turns them into this high energy instrumental for our host to rock over, and he doesn’t disappoint. Back in the day I stole the cassette version of this single from Sam Goody so me and my boys (Basement Crew in effect!) could rap over the instrumental version on the B-side. This is a certified banger and an unsung classic.

Fo’ Eva Blunted – RL slows the pace down a bit with this instrumental. Nine uses the soulful mid-tempo backdrop to spit reality raps, as he touches on the problems and pressures that come with living in the hood as a black man, which is why he resorts to weed to cope with it all: “Mad stress, thank God for the buddha bless, now it’s off my chest, until tomorrow it’ll happen again, I’ll still be hunted, I’ll still be wanted, so I’m forever blunted”.

Peel – Over a melodious melancholy backdrop (with an ill bass line), Nine’s looking to snatch the imaginary crown off the head of any so-called kings in this here rap ting. RL’s gorgeous instrumental is arguably my favorite on the album.

Retaliate – Tony Stoute hooks up a solid backdrop for Nine and his special guest, A.R.L Da X’rsis to pass the mic back and forth like Aaliyah on this duet. Both emcees turn in serviceable performances and A.R.L. gives me an early candidate for worst moniker.

Tha Cypha – RL cooks up some slick jazzy Inspector Gadget type shit for a hungry Nine to spew potent battle rhymes over, as he dares any rapper to step into his cypha: “One sucka, two sucka, three sucka, four suckas, bring more suckas, punk muthafuckas, talkin’ bout you can’t feel my style, I can’t feel you either, but I bet yo’ ass feel this meat cleaver”. He would also earn a spot in The Source’s once highly touted “Hip-Hop Quotable” column for the song’s final verse: “Save it, for David, easy back it up, I got OJ Simpson’s knife right at your gut, I do you like your name was Nicole, when I roll headspins, niggas drop like Ronald Goldman”. It’s kind of nasty that he wrote those lines less than a year after the two murders. Proof that Nine gave two fucks about the whole “too soon” rule of thumb.

Ahh Shit – Through the years I’ve heard many hip-hop producers sample Debarge’s classic record “All This Love”, but never has a sample of the smooth r&b groove sounded as dirty and gutter as RL’s interpretation on this record. Of course Nine matches its grit with grimy bars in his signature growl: “I get mad when niggas try to play me like I’m stupid, I start shootin’ like a revolution or Cupid, I don’t miss infrared type thing goin’ on, I drop a bomb like Hiroshima with my nina, then move my blade like a crossfade on your jawline, understand that Nine, is Optimus Prime”. The hook is kind of corny, but it’s still a raw record.

Everybody Won Heaven (Redrum The Remix) – Tony Stoute gets his final production credit of the evening, remixing his own “Redrum” joint. I like the O.G. instrumental, but the bleakness of the piano sample that Stoute uses on this remix gives me goosebumps. Nine doesn’t spit his strongest bars on this one (all though I love the poetic line: “I’m hittin’ like the raindrops, fallin’ from skies, when God cries, as the chosen man on stolen land dies”), as the final verse is pretty much him chanting meaninglessness, but his vocal tone alone sounds great over Stoute’s dark production.

Any Emcee – I believe this was the final single released from Nine Livez. RL builds the instrumental around the classic Spinners’ record “I’ll Be Around”, as Nine continues to wage lyrical war on any challenger that steps in his path.

Ta Rass – The last song on Nine Livez is a decent record, but easily the least entertaining song of the evening. But I still chuckle every time I hear Nine threaten “I’ll shove my balls in your mouth, you look like Dizzy Gillespie”.

Nine’s career will always be a conundrum to me. On Nine Livez he proves that he had bars, hunger, a quality flow and one of the most unique and illest voices in hip-hop history. And when you pair Nine’s undeniable emcee abilities with Rob Lewis and Tony Stoute’s brilliant production work, the results are a remarkable debut album from the self-proclaimed number one contender. Yet, Nine’s name is never mentioned amongst the greats in his class (of whom some he’s more talented than), just as Nine Livez is an overlooked, unappreciated footnote in the annals of hip-hop. To not proclaim Nine Livez a classic is a gross injustice, second only to the African Slave Trade.