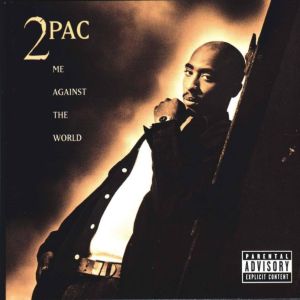 Thanks to its lackluster production and poor mixing, Strictly 4 My N.I.G.G.A.Z. is and will always be my least favorite 2pac album (fyi, I only count the albums from 2Pacalypse Now through The Don Killuminati as Pac’s catalog. The rest of those posthumous albums come with asterisks), regardless of how commercially successful it was. Musically, Pac would bounce back nicely in ’94 with his crew, Thug Life and the Volume 1 album, but his personal life was in shambles. He was charged and found guilty for assaulting Menace II Society co-director, Allen Hughes, in and out of court for sexually assaulting Ayanna Jackson (which he would eventually be convicted of and serve 9 months for in 1995), and to bring his already drama-filled year to an end, he was robbed and shot 5 times at Manhattan’s Quad Studios on November 30, 1994. But through all the turmoil, Pac was still able to record music and would release his third solo effort, Me Against The World in March of 1995.

Me Against The World would be released a month after Pac begin serving his sentence for sexual assault, which is why he wouldn’t appear in any of the music videos for the album’s singles. Me Against The World would go double platinum and Pac would become the first artist to have a number one album on the Billboard 200 while serving a prision sentence (this would become a marketing strategy that several labels and artists would soon follow). The album is universally considered Pac’s best work, and is often put on greatest of all-time list for hip-hop albums and all genres.

Me Against The World has always been my favorite 2pac album. It’s been awhile since I’ve listened to it from beginning to end, so let’s see how it sounds 25 years after its release.

Intro – Me Against The World opens with a standard drum beat and some emotional guitar licks (courtesy of Darryl Crooks) placed underneath a bunch of snippets taken from news reports about the Quad Studio shooting that Pac survived. This is used to set up the next song.

If I Die 2nite – This is one of two tracks that the severely underappreciated Easy Mo Bee is credited for producing on MATW. Pac falls in love with words that start with P, as he potently plasters this song with a plethora of P words (see what I did there?): “They say pussy and paper is poetry, power and pistols”. What the hell does that mean? And who is the “they” that says that? Even with his ludicrous opening line (that he also uses to begin the third verse), he does spit some strong bars on this one: “I’m sick of psychotic society, somebody save me, addicted to drama so even mama couldn’t save me”…”Going insane, never die, I live eternal, who shall I fear? Don’t shed a tear for me nigga, I aint happy here, I hope they bury me and send me to my rest, Headlines reading: “Murdered To Death”, my last breath”. Pac rides Mo Bee’s solid backdrop, beautifully. I completely forgot about this song, so it ended up being a pleasant surprise.

Me Against The World – SoulShock & Karlin hook up a brilliant backdrop built around a well-used Isaac Hayes sample, an ill Minnie Riperton loop (from the same song that ATCQ sampled for “Lyrics To Go”…Tribe Degrees of Separation: check), hard hitting drums, and angelic adlibs from Puff Johnson. Pac and Dramacydal (which is the name that Pac’s crew, Outlawz went by before changing the group name) use the beautiful instrumental to discuss the stress, problems and demons they face day to day in isolation. This song appeared in the movie Bad Boys and was on the soundtrack, which was released a week after MATW. This is easily one of my favorite songs in Pac’s catalog.

So Many Tears – This was the second single released from MATW. The D-Flizno Production Squad (which is another alias for D-Flow Production, which is Shock G and his Digital Underground team) is given the production credit for the bluesy backdrop (I love the Stevie Wonder harmonica sample and the breezy guitar licks courtesy of Eric “Kenya” Baker) that Pac uses to reminisce over his dead homies and contemplates his own death: “Now I’m lost and I’m weary, so many tears, I’m suicidal so don’t stand near me, my every move is a calculated step, to bring me closer to embrace an early death, there was no mercy on the streets, I couldn’t rest, I’m barely standing, bout to go to pieces, screaming peace”.  The content is depressing, but when combined with the dope production work, it makes for a classic record.

Temptations – This was the third and final single released from MATW. Pac eases out of the darkness from the previous song, as he wrestles with being in a monogamous relationship and the ever lingering feline temptation that awaits him: “A lot of people think it’s easy to settle down, gotta woman that’ll please me in every town, I don’t wanna, but I gotta do it, the temptation, got me ready to release the fluid, sensation”. Easy Mo Bee gets his second and final production credit of the evening and it’s a certified mid-tempo funk banger. This is a very underrated Pac record.

Young Niggaz – Pac reflects back to the days of his youth before the streets consumed him and stripped him of his child-like innocence, then he encourages any young kids listening to stay in school and out of the streets as the song closes. Moe Z.M.D. builds a decent traditional nineties west coast instrumental for Pac’s reflections. This one makes for decent filler material.

Heavy In The Game – Pac invites Richie Rich to spit a verse and Lady Levi (who made cameos on Dr. Dre and Warren G records) to sprinkle some reggae chants in between the song’s verses. Pac and Richie Rich don’t cover any new territory and I wasn’t crazy about the Mike Mosley/Sam Bostic instrumental.

Lord Knows – This one plays like a thug psalm. A vulnerable Pac is King David, pouring his heart out over Brian G’s somber west coast instrumental: “I smoke a blunt to take the pain out, if I wasn’t high I probably try to blow my brains out, I’m hopeless, they should have killed me as a baby, now they got me trapped in this storm, I’m going crazy”. This is another one of those personal and emotional joints that made Pac such a special artist.

Dear Mama – This was the lead single from MATW and easily the biggest hit in Pac’s celebrated catalog. Tony Pizarro creates a beautiful instrumental for Pac to rap heartfelt praises to his mama: “Cause when I was low you was there for me, and never left me alone because you cared for me, and I could see you comin’ home after work late, ya in the kitchen tryna fix us a hot plate, just workin’ with the scraps you was given, and mama made miracles every Thanksgiving, but now the road got rough, you’re alone, tryna raise to bad kids on your own, and there’s no way I can pay you back, but my plan is to show you that I understand: you are appreciated”. This timeless classic may be Pac’s magnum opus and is a strong argument for top ten hip-hop songs of all-time.

It Ain’t Easy – Tony Pizarro gets credit for this dope instrumental, but no credit is given to the talented soul who plays the shit out of the bass guitar throughout. Pac uses the delightful instrumental to talk about the struggles that comes with being 2pac, and adds a catchy hook to go with it. Definitely one of my favs on the album.

Can U Get Away -Mike Mosley builds a deep groove around an interpolation of Frankie Beverly & Maze’s “Happy Feelin’s”, as Pac tries to convince the objection of his erection (Ebony) to leave her abusive man for him and his thug lifestyle. Years before Apple, Pac had his own version of FaceTime, as he notices that Ebony is wearing glasses during their phone conversation at the beginning of the song (by the way, does anyone else remember the video phone that was briefly on the market back in nineties?). Other than that little miscue, this is an enjoyable little bop.

Old School – Pac pays homage to the culture and the emcees that came before him over SoulShock’s laidback uninspired instrumental. I love the sentiment, but this is easily one of my least favorite songs on MATW.

Fuck The World – Shock G brings a little more of the DU vibes with a Prince twist that Pac uses to give the world the middle finger. Yet another song on MATW that I forgot about. It’s not spectacular, but it’s a solid filler joint.

Death Around The Corner – This is easily one of my top five Pac songs of all time. Johnny J builds the instrumental around a soulful guitar loop that has a sense of urgency that matches Pac’s manic content and frantic flow: “I see death around the corner, gotta stay high while I survive, in the city where the skinny niggas die, if they bury me, bury me as a G nigga, no need to worry, I expect retaliation in a hurry, I see death around the- corner, any day, tryin’ to keep it together, no one lives forever anyway, stugglin’ and strivin’, my destiny’s to die, keep my finger on the trigger, no mercy in my eyes”. Pac’s paranoia and emotional bars sound superb over the raw production work.

Outlaw – For the final song of the evening, Pac invites Dramacydal back to join him, as they celebrate the thug life and the hopelessness that comes with it. Moe Z.M.D.’s dim west coastish backdrop works as the perfect canvas for all their thuggery.

For the majority of Me Against The World, Pac sounds like a paranoid psychiatric patient, sharing his thoughts in an attempt to exercise his demons, with the instrumentals serving as the couch he lays on, and we, the listening audience are his therapists. For some reason, I thought Easy Mo Bee produced more than 2 songs on MATW, but even with his limited contribution, the lesser known producers create a quality soundscape for our host to vent over. There are a few skippable moments and filler records that I forgot existed over the years, but the majority of MATW sounds so great that you’ll be willing to overlook the album’s few blemishes.

I don’t know if Pac was paranoid or prophesying on MATW (maybe a little bit of both?), but it sure made for some intriguing content and great songs. And it also gives merit to Proverbs 18:21: Death and life are in the power of the tongue, and they that love it shall eat the fruit thereof.